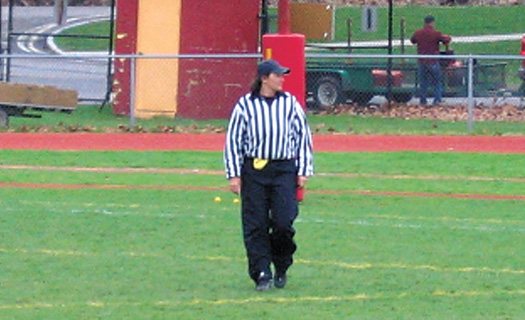 The Fastest Sport on Two Feet

Lacrosse is considered to be a difficult sport to officiate due to fast ball movement and numerous, subjective rules. I recently spoke to Maddy Russell, an official for U.S. Lacrosse, the national governing body for the sport, about her experiences. In addition to officiating girls and women’s lacrosse games, Maddy is studying marine policy at the University of Delaware. She is a Lewes resident.

Did you play lacrosse in school and how did you get started officiating games?

I played lacrosse when attending Towson High School in Maryland and the University of Vermont. When I was living in Colorado I played in a post college club league and the Vail Lacrosse Shootout, an interesting event because it attracts some of the best lacrosse players in the world including players from the world cup teams. I started officiating lacrosse games after moving to Ithaca, NY, where a soccer official suggested that I might enjoy the group of lacrosse referees they had there. Like others, I find that officiating is a way to give back to the sport that has given me a lot; it also helps you stay in shape and provides extra income doing something you enjoy.

What type of training is needed to become a lacrosse official and what makes for a good referee?

Better referees make for a higher level of play, so you go through extensive training, both in the classroom and field— and, you must past a training test and field evaluation each year, through U.S. Lacrosse. I am qualified to officiate at all levels including youth, high school, collegiate, and club games. Recently, I started teaching young referees and next year will have two college teams attend the classes. Their coaches believe having a good understanding of the rules can greatly improve their play. In addition to knowing the rules, a good referee communicates well with their crew after every goal and keeps in constant eye contact with them during play. You also have to be able to run so you can put yourself in proper position to make a call. I have found that in refereeing you need to be able “to see it for yourself,” meaning that you need a personality that does not look to the outside for approval.

What makes lacrosse a difficult sport to officiate?

As a referee you have to stay ahead of the play to see it properly which demands fitness, the ability to run a lot, up and down a football-sized field, in the two 25 minute halves. Experience is crucial to know what you are seeing as you must make split second decisions. Also you have to be able to deal with parents and coaches that may not always have a good understanding of the rules. For a young referee it looks like everything is happening at once as there is a lot of action— passing, throwing, interceptions, fouls, and goals—with this stick and ball game. For an experienced official the hardest part of refereeing is getting into a rough game—blowing your whistle endlessly, the rough play never abates and the game never settles into a nice rhythm.

Yes, the game is becoming more physical. The only protective equipment worn by women is goggles and a mouth guard. When I played I only got hit in the head twice where as today play is more physical. As a referee I am now seeing girls getting bruised on their upper arms and rib cages in almost every game. There is a possibility that girls will have to start wearing head gear as the boys do to protect them when they are playing.

Lacrosse referees are viewed as the “keeper of the game.” What does that mean and how do you maintain a positive environment when officiating?

As a referee, I have the “best seat in the house.” I have refereed other sports and with women’s lacrosse there is a different feel. This sport is run by women and played by girls and women. As a referee you want to think of the spirit of the rules. You can stop a coach from screaming on the sidelines by maintaining a positive attitude, talking to them informally to try to take them to a higher level. Typically you can maintain a positive environment by talking to the fans and players, complimenting good plays and explaining the rules briefly and confidently. As a referee you have a lot of informal power—you and your officiating crew are in a position of not letting difficult players, parents, or coaches take over the game.

Is there a lot of camaraderie among lacrosse referees?

I have found that the camaraderie among referees is amazing. You really get to know each other well since you often ride to games together and interact before and after the games. There is a lot of respect for one another as you see your colleagues in many different situations, handling themselves so well. You make nice lifelong friends, creating a great social network.

Was there any particular game or tournament that was especially memorable?

I once had a summer game where there was not a single whistle for about 15 minutes. No fouls, just amazing clean, beautiful play. After a few minutes, I realized what was happening. We had two very, very good teams, who both knew the rules and respected each other, and just played very well. We only had to stop the game a couple of times, for a minor foul or goal. This was truly an exceptional game, making it a joy to be on the field.