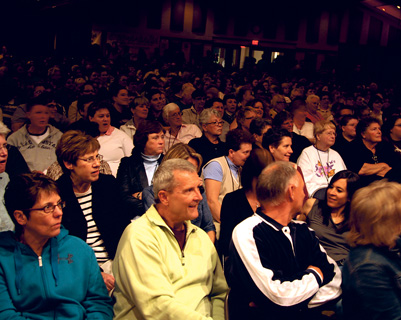 Women of every age, size, shape and color descended on downtown Rehoboth Beach for the long weekend of April 12 through 15 to celebrate the twelfth annual CAMP Rehoboth Women’s FEST. What started as the efforts of a small group of women has grown into a true multiple-day extravaganza that offers something for everyone, including the dog.

With the weather seeming to heat up as the weekend’s activities did, events kicked off Thursday with a meet and greet benefit reception for Col. Grethe Cammermeyer and her partner, and a happy hour at Mixx.

On Friday, a group of dedicated women (and men), hosted by CAMP’s Volunteers on Vacation, worked to spruce up the gardens of seniors at Huling Cove in Lewes. The culturally minded chose between enjoying a walking tour of Rehoboth to learn about its history and unique “tent houses,” attending book signings, readings, and discussions at Proud Books featuring CAMP’s own Fay Jacobs, along with Lynn Ames, Georgia Beers, Sally Bellerose, Andrea Myers and J. Lee Watton, or admiring the works exhibited at a women’s photography show and reception at Cloud 9. The golfers headed up Route One for a random draw nine-hole golf outing at The Rookery. The athletes and the art aficionados converged at Cloud 9 for happy hour drinks and dancing.

Friday’s highlight was the sell-out crowd of nearly 800 girls and guys who packed the Convention Center for comic Suzanne Westenhoefer. Jilted Gypsy...For Sale or Rent, Suzanne’s new show, brought giggles, guffaws, howls of laughter, and more than one lady reportedly needing to make a run to CVS for some “Depends.”

Saturday was a day filled with workshops, seminars, and a shopping expo offering plenty of opportunity to spend money and win prizes. Women who managed to rise early and make their way to the Convention Center enjoyed a breakfast catered by Mixx before the 250 women who planned ahead sufficiently to grab one of the FEST passes, dove into a full day of learning. Featured topics were as diverse as the participants with options to explore women’s sexuality, learn to be a stand-up comedian, sweat to Latin beats while learning Zumba, get golf and poker tips, or learn to mix a mean martini at bartending 101.

Perhaps the most poignant experience was hosted by the Rehoboth Beach Film Society, which sponsored a screening of Serving in Silence, a film starring Glenn Close based on Col. Cammermeyer’s autobiography. More than 200 people then raptly listened to Col. Cammermeyer as she shared her life story, struggle, and ultimate victory of how this National Guard nurse, Vietnam veteran, Bronze Star recipient and Nurse of the Year was dishonorably discharged for answering truthfully that she was a lesbian during an interview for a security clearance. Col. Cammermeyer recounted her contest of these anti-gay policies and ultimate reinstatement in the military by federal court order. Col. Cammermeyer is truly an inspirational ground breaker in the fight by gays and lesbians to be allowed to serve their country.

This day of mental exercise gave way to an opportunity for approximately 500 women to exercise their bodies at the Ladies 2000 Tea Dance at the Rehoboth Convention Center. The young and energetic, and not so young but energetic, enjoyed cocktails and hot dance tunes that revved up the night. For those peppy enough to do both or those seeking a less vigorous end to the evening, for two performances each, a packed house at CAMP Rehoboth’s Community Center sang along with Tret Fure and laughed with comic Poppy Champlin.

The following morning, brunches at the Frogg Pond and Rehoboth Ale House fueled the crowd as about 250 women, men, and their pups participated in “Broadwalk on the Boardwalk,” raising $6,590 for the Delaware Breast Cancer Coalition. For those still looking for something else to do, the weekend finished up with lunch at Rehoboth Ale House, and Texas Hold’em Poker at CAMP Rehoboth.

A weekend like this could not have happened without community involvement and support, and the Rehoboth community is one of the most generous. Presenting sponsor was Olivia Travel. Event sponsors included Karen Gustafson, REALTOR— Move2Rehoboth.com, Jenn Harpel of Morgan Stanley Smith Barney, Lana Warfield, REALTOR at Prudential Gallo, and Guardian Property Management. In addition, there were many other generous event and corporate partners, presenters, and volunteers. Throughout the weekend, many local businesses lent their financial support and dozens of restaurants offered FEST attendees discounts and specials.

Planning has already started for next year, so mark your calendars and give CAMP Rehoboth a call if you would like to volunteer your time, talent, or money to make the 2013 FEST an even greater success.