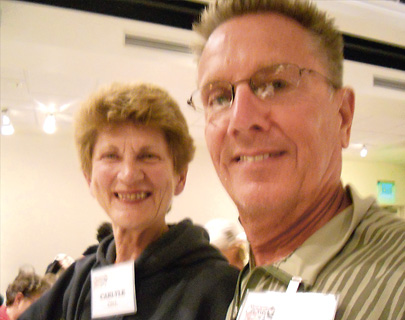 In its fourth season, the CAMP Rehoboth Chorus now numbers over 60 singers—young, older, gay and straight—from a diverse mix of backgrounds and musical experience. Some have had professional vocal training and years of choral experience; others simply enjoy singing along with the radio or in the shower. But they all have one thing in common: they love singing in the CAMP Rehoboth Chorus.

Music has always been important to Chorus member Jules Nagy and his partner of 46 years, Dennis (Denny) Ehrhardt. Music actually brought them together. It was the ‘60s and Pittsburgh was a hub for Doo-Wop/pop vocal music. Part of this music scene, Jules and Denny met while performing with the Vandells; Jules sang and Denny played piano and sang backup when needed. Local favorites, the Vandells recorded several 45s under different labels. They also made commercials including one for Iron City beer—“Iron City beer is the beer of perfection, it’s the best darn beer around here….”

Denny and Jules have extensive musical backgrounds. Denny was a church organist for 34 years. Jules has the distinction of having sung a duet with Shirley Jones when they were students at a high school near Pittsburgh. Later, while serving with a military police unit in Germany, Jules toured Europe for two months in the Army’s production of Brigadoon; he was Charlie.

Since their Doo-Wop days, Denny and Jules have sung with over a dozen choral groups in Pennsylvania and in California where they lived before moving to Lewes in 2005. They were thrilled when the CAMP Rehoboth Chorus was formed in 2009 and have been singing in the bass section ever since. Denny makes all the rehearsal CDs for the Chorus; fills in as accompanist when needed; and leads sectional rehearsals for the basses.

Ed and Irene Fick moved to Lewes from Wilmington in the fall of 2010. They learned about the Chorus through an article in the Cape Gazette. Irene loves to sing, especially Broadway and popular music, and joined the Chorus right away. Ed taught instrumental music in the Delaware public schools for 34 years. He is more attuned to classical music and decided not to join—at first. When Irene went to the first rehearsal of the 2010 season, Ed walked around town. He returned to CAMP Rehoboth while the Chorus was still singing and liked what he heard and decided to join, as well. So while Irene, a soprano, is hitting the high notes, Ed, a bass, handles the deep, low ones.

Ed and Irene have been married for 10 years (newlyweds by many standards). They have each sung with many different choral groups. Ed sang in the choirs of both the Aldersgate United Methodist Church, and most recently, at First Unitarian church in Wilmington. Irene sang in the Delaware Women’s Chorus of the Delaware Music School for three years and with the Temple University (Philadelphia) Chorus. They both enjoy the Chorus—the songs, the performances, the people. They are members of CAMP Rehoboth and enthusiastically support its mission to “Create a More Positive Rehoboth.”

Chorus tenor Carlyle Gill is an associate priest at St. Peter’s Episcopal Church in Lewes. All her previous choral experience has been singing with church choirs. The Chorus is a new experience for Carlyle, and she loves it.

After a rewarding a career which included overseas assignments with the Peace Corps and Voice of America, alto Nancy Bouse now finds joy in singing and playing the recorder. Nancy attended last year’s Chorus concert, All You Need Is Love!. She loved the concert and knew this was a group she wanted to join.

Don’t miss the CAMP Rehoboth Chorus Winter Concert, Broadway Our Way, Saturday, February 2, 2013, at 7 p.m., at Epworth United Methodist Church, Rehoboth Beach. It is sure to be an unforgettable, fun evening, and you may even decide to add your voice to the joyful mix of singers who are the CAMP Chorus.