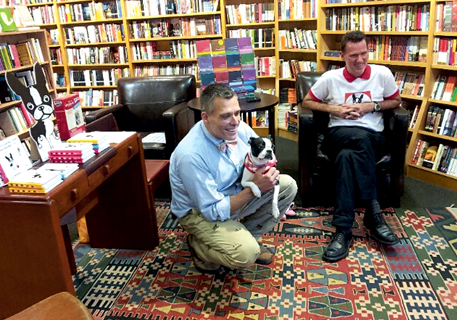 I used to see them walking along Baltimore Avenue in the vicinity of Aqua and Iguana Grill all the time.

Well, in the time since Michael and Mirabelle lived here, they have become incredibly famous!

Mirabelle, the Boston Terrier, got her start in Rehoboth Beach and now stars in the pages of her own children’s books series, a series of three Happy Dog Adventures.

And now, Michael and Mirabelle are returning to Rehoboth during the Sea Witch Festival to launch their new books. Not only will they be signing books, but look for Michael and Mirabelle in the Sea Witch Parade. “I never knew when this one small dog came into my life six years ago that she would take me on this amazing adventure. When people tell me they love the books I turn and tell them, ‘I give all the credit to Mirabelle.’ I am so happy that people have connected with the message about being aware of and enjoying the small joyful moments of life with someone special. I am so grateful that an audience is connecting with Mirabelle and her message of love.”

It was here in Rehoboth Beach that the little pooch first appeared on t-shirts, in graphic designs and on all manner of products in Michael’s little shop on Baltimore Avenue. Well now, Mirabelle has gone big time! Who knew that a little dog could have such big adventures?

The books set out to prove that “One Little Dog’s Adventures Can Change the Way You See the World.” Mirabelle captured hearts in artist Muller’s line of greeting cards and now she brings children into her world with a series of illustrated board books about the pleasure and excitement of discovering simple things. Mirabelle and the Bouncy Red Ball; Mirabelle and the Butterfly; and Mirabelle Goes for a Walk (Workman, October 2012, $6.95 each) introduce new readers to the life of an inquisitive little dog and her devoted owner.

The books feature Muller’s clean black and white illustrations, with a touch of photography and splashes of bold color, capturing the expressions of Mirabelle as she makes each new discovery. With her wide set eyes and oversized head, Mirabelle looks smart, feisty, happy, and eager as she and Mr. Muller explore their neighborhood together.

Collage artist and photographer Muller is also the proprietor of the Mirabelle line of greeting cards. Muller and Mirabelle, a real Boston terrier, began their lives together in Rehoboth in 2006. Currently, they live in Baltimore, and online at adventuresofmirabelle.com.