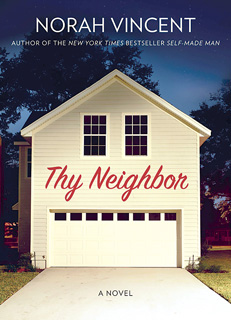 The crime rate was just too much.

Oh, it wasn’t anything violent. Nobody got killed, it was nothing like that. But petty thefts happened too often in your area and minor vandalism was on the rise, so your neighbors organized a Crime Watch. Just thinking they’re being seen has chased away a lot of mischief-makers and you feel safer.

Keeping an eye on your neighbor’s house is a courtesy as old as civilization. But in the new book Thy Neighbor by Norah Vincent, one man takes “neighborhood watch” a bit too far.

There was something particularly loathsome about Dave.

Nick Walsh could barely bring himself to call Dave a friend. Dave was more like a parasite, acting like he cared after Nick’s parents’ murder-suicide when he only cared about himself.

That’s why Dave was the first of Nick’s spying projects.

After all, what else did Nick have to do but watch his neighbors? Avoid ghosts that skulked around the house, out-of-sight but not out-of-smell? Yeah, Nick was sure he could smell his parents, thirteen years after their deaths.

It was easy to spy on Dave: Nick bought a kit from the Yellow Pages, installed cameras in a DVD player, and made it a present. Spying allowed him to verify that Dave was a fat jerk.

The next victim was Dorris, the divorcee across the road. She and her ex had some explosive fights. It was no wonder he left her.

Then there was the Gruber family. Nick felt sorry for the wife and boys, especially the youngest one. His dad was some piece of work.

The only person Nick didn’t watch was Mrs. Bloom, who’d lost her daughter and granddaughter. She was harmless. He felt a strange kinship with her.

So between monitoring the neighbors, drinking down at the Swan, and spending time with Monica, a woman he’d met there, Nick’s pathetic little life was full.

And then the pink notepaper started appearing in his mailbox.

Someone was sending him poetry, written in his handwriting but it wasn’t anything he’d ever penned.

Somebody was playing games. Suddenly, Nick knew he had to watch himself….

Not quite a thriller, not exactly a mystery, Thy Neighbor turns out to be a little of both, and a twist.

With his sardonic words and deep self-loathing, it’s obvious that author Norah Vincent’s main protagonist, Nick, is damaged. I got that, but I didn’t get much else from this book for several pages in. There are a lot of drink-hazy scenes, dialogue that goes in circles, and confusion that made it hard to stay focused.

But then Vincent lets us see what Nick is seeing. When that happens, it’s hard to look away and it’s hard to feel sorry for Nick anymore. That he’s a voyeur becomes as reprehensible as what he sees, and what happens is a big surprise.

Ultimately, I liked this book enough, even if it was hard to get into. If you can deal with that and some harsh language, then missing Thy Neighbor could be a crime.