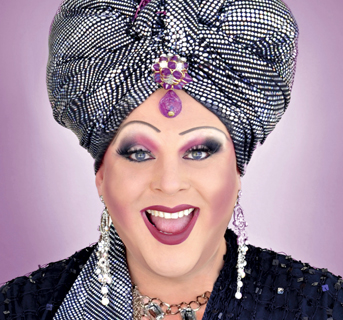 Stay Tuned for Cashetta, the Incredible Shrinking Drag Queen at the Moon!

Editor’s note: When people think of “drag queens” they may think of fast paced dancing and “lip synching for your lives.” Cashetta is much more than a drag queen, she is a virtual “performance artist.” From magic acts to a good old fashioned cabaret act, Cashetta is a true renaissance woman. Rehoboth is lucky to have her back at the Blue Moon for the second year in a row for her hilarious one woman show, all season long! Here, she talks to Letters interviewer Michael Cook about the origin of Cashetta, and her love for Rehoboth Beach.

Tell me first, where and how was the amazing Cashetta born?

Cashetta was born when I was a teenager in the late 80s in NYC. The nightclub scene at the time was unbelievably fabulous and my friends and I would dress up in the craziest and most artistic outfits we could put together with bits and pieces from craft stores and each other’s mother’s wardrobes! It was a magical time on legendary dance floors.... Especially while rubbing shoulders with the likes of Grace Jones, Liza Minnelli and Sinead O’Connor.

I first met you during your times in New York City, where you worked with other legends, like Lady Bunny, Sherry Vine, and Shequida. What are some of your best memories of New York City?

I adored the NYC drag scene back then and was very lucky to be embraced by these legends. Sherry Vine and Jackie Beat were so instrumental in getting me out there when I was a new girl on the scene. My favorite memories were every Wigstock (street festival) with Lady Bunny, sharpening my comic chops six nights a week at Lips restaurant and being a featured songstress at the legendary Bar d’O with Joey Arias, Raven O and Sade Pendarvis.

Your off season is spent in Wilton Manors, FL at Bill’s Filling Station, right in the heart of Fort Lauderdale. How do the Florida boys differ from the guys in the Northeast?

Wilton Manors is where I landed when I ran from the NYC winters and I have made it my home. I’ve been coming to Florida and performing for 15 years and this community has been wonderful to me. I’m at the Alibi and Bill’s when I’m not on the road and it’s just a blast. The boys down here are a little more casual. Flip flops down here are dress shoes! The heat has a lot to do with it. But they’re gorgeous in BOTH regions!

You were in Rehoboth Beach all summer last year, and you were a hit! How was your experience in Rehoboth?

I LOVE Rehoboth Beach!!! I’ve performed at the Blue Moon about four times in the past but they were just one nighters. When I was asked to come to do the entire season I jumped at the chance. The Blue Moon is tops and to be a part of their summer lineup is a thrill for me.

So now that you are coming back to the Blue Moon this year, what can we all expect? Any changes to the “Cashetta Experience”?

I will be back at the Blue Moon and I’m already putting together all new material! Tons of fresh comedy magic, boggling mind reading, and over the top bawdy songs and jokes that will be a blast. There will also be a big change in the Cashetta Experience. I’ve just had weight loss surgery and this summer I’ll be the incredible shrinking drag queen.

You’ve worked in more places than we can count and traveled all over the world. Who are some favorites you’ve worked with? Anyone on your “wish list” with whom you would still love to collaborate?

That’s a tough one... I’ve worked with so many amazing people. Favorites would certainly include Coco Peru, Chita Rivera, Neil Patrick Harris, Miss Richfield 1981, Joey Arias, and of course Pamala Stanley, Mona Lotts and the stars of the Blue Moon Divas and Legends shows. I would love to collaborate with Bruce Vilanch and Mark Shaiman! That would be a dream team for me and one helluva show!

A whole new wardrobe! Stay tuned for a plus size yard sale!