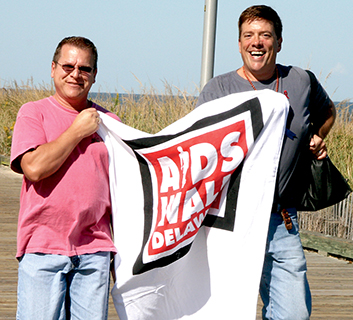 Is AIDS Becoming a “Gay Disease” Once Again?

Recent reports from the Centers for Disease Control (CDC) have ignited debate in the HIV/AIDS community. At the center of the discussion is one question: Is AIDS becoming a “gay disease” once again? The latest national statistics would lead one to answer “yes,” at least for the United States.

These trends can be seen here in Sussex County, Delaware, according to Leslie Hayes, a nurse at the Christiana Care HIV Wellness Clinic in Georgetown. “Our new clients are coming to us from both ends of the spectrum,” explains Hayes. “We are seeing an increase in the number of gay men in their twenties coming to us for their HIV medical care. However, we have also enrolled several gay men in their late ‘60s or early ‘70s who have recently become HIV-infected.” Some would suggest that complacency about HIV/AIDS is to blame, with HIV/AIDS no longer being considered the crisis that it once was.

A recent survey looking at the annual reports, newsletters, and listservs of major national lesbian, gay, bisexual, and transgender (LGBT) organizations found that most of them either made no mention of HIV/AIDS, or only indirectly mentioned it. In a recent article in Poz magazine, longtime AIDS activist Paul Kawata said, “It’s shocking to me that HIV, one of the largest killers of gay men, seems to be absent from the discussion at major LGBT organizations.” As a result, Kawata and other program directors established the “We the LGBT” initiative, challenging LGBT organizations to make the commitment to include HIV/AIDS education in their programs and staff trainings.

CAMP Rehoboth has been meeting that challenge for years now. Since the organization started in 1991, CAMP has raised hundreds of thousands of dollars for local AIDS organizations, providing them the resources to provide direct services to Delawareans living with HIV/AIDS. CAMP Rehoboth is one of the community organizers of the World AIDS Day events held in Rehoboth Beach each year. For more than a decade, CAMPsafe (CAMP Rehoboth’s HIV prevention program) has provided HIV counseling and testing, sexual health counseling, outreach and condom distribution to gay, bisexual, and other men who have sex with men in Rehoboth Beach and other parts of eastern Sussex County.

CAMPsafe Program Director Sal Seeley is right there on the front lines of these efforts… and he is at the front of the line as the captain of CAMP Rehoboth’s team for the Delaware AIDS Walk. “I think it is important for anyone—and everyone—to participate in the AIDS Walk because AIDS is ‘off-line’ for many people in our community, especially young people,” says Seeley. “Our Men’s Support Group often discusses how they see younger men not paying attention to the issue of HIV/AIDS anymore. Being a part of the AIDS Walk is one way to make the issue visible and relevant to their lives.”

The Delaware AIDS Walk is also an important way to raise community awareness and needed funding at the same time. All monies raised through the Walk stays in Delaware, to fund HIV prevention and treatment services in communities throughout the state. This year’s Walk will be held on Saturday, September 28, with check-in starting at 9 a.m. and the step-off at 10 a.m. In northern Delaware, the Walk is being held at the Wilmington Riverfront; Rehoboth’s Walk begins and ends at Grove Park. At the beach, the 5-kilometer walk takes about an hour to complete, and the route includes part of the Boardwalk. For many walkers, the emotional highpoint of the walk is the opportunity to remember loved ones who have lived with HIV disease. Walkers place red carnations, supplied by Windsor’s Flowers on Coastal Highway, in front of a metal sculpture of an AIDS Awareness Ribbon. The sculpture was created by Rehoboth Beach artist Ward Ellinger.