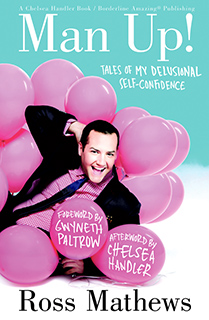 You’d be such good friends.

You and your favorite Hollywood star would be besties, in fact. The two of you would hang out every weekend, going to auctions and having cookouts. You would shop together, lunch together, and you would gossip together every chance you got.

Yep, you and your favorite star would be absolute BFFs…if you could only actually meet once. And in the new book Man Up! by Ross Mathews, you’ll learn how one guy made that big Hollywood dream happen.

Practically from the time he was born, Ross Mathews was “the MVP of TMI,” and he loved to talk, connect, and be the center of attention. Learning to swear like a man helped some (his father happily taught him). Being glamorous and fabulous helped, too—until his crew boss at his first job called him a terrible name.

That tore Mathews down because, even though his mother knew he was gay, he hadn’t yet admitted it to himself. He, in fact, dated girls—until he finally came out to the first one he’d tried to sleep with. Making out with girls, he says “is much like making out with a guy—except softer and much less enjoyable.”

So dating girls bombed. But there were different successes ahead.

At a tender young age, while sitting on the couch watching Live! with Regis and Kathie Lee with his mother, Mathews suddenly realized, with crystal clarity, that he would someday become a TV talk show host. Yes, he was only ten, but he “knew it was my destiny.” For years, he kept that idea front-and-center until, at the end of college, he had a chance to intern at The Tonight Show with Jay Leno and was (little to his surprise) hired.

Interns, of course, rarely get paid, but Mathews was happy to do the job for free. He soaked up all the info he could find, asked questions, and was rewarded with a last-minute bit on-air—which became a long-term, important part of the show.

Today, Mathews is still his fabulous self, only more so. He meets with celebs and gets to do all kinds of cool things, on- and off-camera. Oh, and he counts Gwyneth Paltrow as his BFF—because he asked her to be.

While I wouldn’t, in a hundred years, say that Man Up! is “hilarious,” it does have its moments. Those moments are mostly punny groaners, but still…

I think I might have liked this book a little better if the humor in it wasn’t so forced. Author Ross Mathews is a very funny guy and his stories are great. They would have been better, I think, without the sometimes-insulting asides to readers and the faux “I’m an old man” type comments. Mathews’ über-fan status could’ve easily carried this memoir. The silly digressions were a distraction.

And yet, I can see where Mathews (and Leno) über-fans would really connect with this book so, if that’s you, I think it’s worth a try. You might find Man Up! to be a fairly good book.