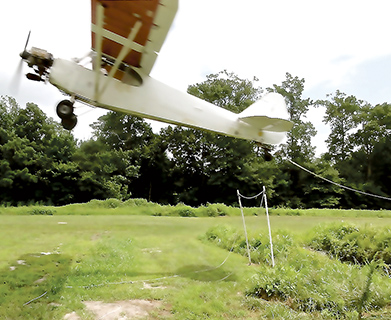 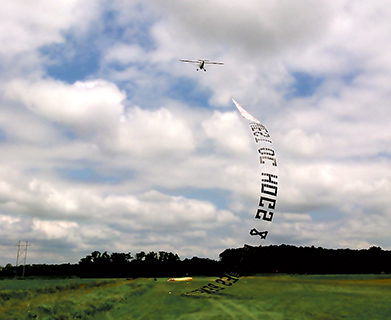 You’re sitting on the beach, reading a good book, sipping a nice French rosé wine, or perhaps just admiring a shapely behind when you hear the buzzing sound of an old-fashioned propeller plane. Naturally, you look up, wondering if the plane flying up the beach from the south will be pulling a banner with one of those crazy Jesus messages, an ad for Discovery’s Shark Week, or perhaps a drink ‘til you puke promotion from the Starboard.

Aerial advertising has been around since the 1930s and part of the Delaware beach experience since the 1950s. I worked in the field once. Literally. It was the summer of 1983 and two buddies and I took off for Myrtle Beach, South Carolina, for some fun in the sun before law school. We shacked up in a shabby apartment on a sand street and through a newspaper ad landed jobs with the Aerial Sign Company.

Every night we’d drink 75-cent beers at a shag club called the Pad. Every morning the husband and wife owners of the company would arrive with coffee and donuts to rouse us out of bed.

Sleepy and hung over, our first stop was always a dusty landing field where the advertising banners were assembled and stored and the airplanes fueled up. We put the signs together by attaching 5-foot red nylon letters to a metal grid and spelling out the ad for the restaurant or bar in less than 30 characters. We were, in effect, tweeting before Twitter. And it was a lot harder. No, not because of the space limitations, but because the metal clips used to attach the letters were so tough to open and close. It was like trying to pry an oyster open with your bare hands.

When all the banners had been completed and rolled up, we’d load them into an old yellow school bus with no seats. As the only one among us who could drive a stick shift, it was my responsibility to drive us a half hour southwest into the South Carolina low country to an even more isolated airfield. Never mind I had no experience driving buses….

Once there, we’d unroll and lay out the signs. A towline attached to the front of each sign was strung between the tops of two tall metal poles, sort of like a clothesline. At about ten o’clock, the first planes arrived. They’d come swooping in, a big hook dangling below and behind the plane’s tail. At just the right time, the pilot would gun the engine and the plane would shoot upwards. This caused the hook to grab the towline between the poles and as the plane climbed higher the sign peeled up off the grass runway and lifted into the air. If the hook didn’t catch properly and the sign dropped, there’d be a scramble to set it all up again.

The buzzing of an approaching plane would snap us out of our marijuana haze. The plane would fly over the field and the pilot would unhook the banner, which would flutter down to the ground. In my stoned state, it always looked so graceful and delicate until I realized it might actually hit me, and I’d take off running out of the way. Once it landed, we went and got it ready to fly again.

I recently had the opportunity to relive my aerial advertising days when I visited Ocean Aerial, a banner flying operation carved out of a corn and soybean farm ten miles west of Ocean City. It’s a family-owned business, the only one flying ad banners up and down the Delaware and Maryland seashore. Three passes up the beach will cost you $400 for Ocean City and $500 for Rehoboth. Things haven’t changed that much in the thirty years since my time in South Carolina. The poles are made from PVC, not metal. Big corporate banners are produced via digital printing, but the small, local ads are still put together by hand, clipping nylon letters to a metal grid. My fingers tingled just seeing them again.

Instead of a school bus, the field hands at Ocean Aerial race about on ATVs and use walkie-talkies to stay in touch with the pilots. I spent some time with two cute fellas ages 17 and 19 who run the field operation. They don’t smoke pot and drink beer like we did. Mostly they talk, fiddle with their cell phones, or look at the Playboy magazines the owner’s son drops off from time to time. Not much goes on until you hear the buzzing of the plane or the crackling of the walkie-talkie. The boys snap into a whirlwind of action for about ten minutes, then its back to swatting the mosquitos and horse flies.

My career as an ad man didn’t last long. After only a couple of weeks, my buddies and I tired of the twelve-hour days and the lack of beach time. One left to go work for a US Senator named Dan Quayle. We two who remained moved on to a restaurant job where we spent evenings high on psychedelic mushrooms and outfitted in purple t-shirts proclaiming, “I’ve Got the Crabs.” But that’s another advertising story for another time….

Rich Barnett is the author of The Discreet Charms of a Bourgeois Beach Town. See More Rich Barnett