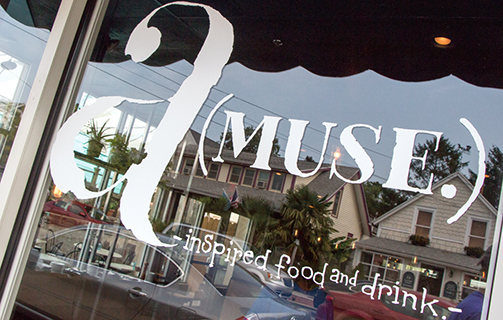 If the answer is anything other than “I was at A(muse) restaurant for the guest chef dinner,” all we can say is that you missed a memorable dining experience. That night, A(muse) chef Hari Cameron asked noted chef and cookbook author Alex Talbot to join him in the kitchen for an experiment in gastronomy.

Cameron and Talbot have long respected each other and learned from each other as they explore menus, recipes, and cooking techniques, pushing their creativity and expanding the limits of food and drink. And we were lucky enough to be there the night they joined forces to create a dinner beyond anything we could have imagined.

Chef Talbot is fond of saying, “It all begins with a question.” That night the question was: “how could two great chefs take local ingredients, local beer, and creative cooking and present a unique six-course tasting dinner?” It began by the chefs trying their tested recipes and dreaming up new ones, inspired by six distinct beers from Rehoboth’s own Dogfish Head Brewery. They found elements they wanted to use in each beer and set about creating the food. They invited other chefs in for a workshop the day before the dinner, to discuss and test out new techniques and flavors. Chef Cameron tells us that in the two days before the dinner, they tried crab 17 different ways (!) before deciding on a warm soft shell crab served over toasted oats with a taste of smoked bone marrow and grilled zucchini. We can tell you that the crab was delightfully crisp on the outside, and rich and fresh on the inside. The creamy, nutty and slightly sweet oats were the perfect accompaniment.

The dinner had begun with a dish we are quite sure very few people in the world have ever tasted. The chefs served a cold shaved foie gras, which had been quick frozen with liquid nitrogen. This unique presentation was complemented by an icy peach granita (like a shaved ice), a touch of sweet yogurt and fresh local peaches. All the flavors were brought out by the Dogfish Festina Peche beer, which also held hints of peach and had a light summer effervescence.

By the third course, we thought we had gone to epicurean heaven! But there was much more to come. Whole grain mustard cavatelli pasta had just enough texture and taste to hold its own next to rabbit sausage and a house-made ricotta cheese. The flavors and textures of this dish were typical of what we were to taste all evening. The firm pasta, the warm and delicious ragout of sausage, the creamy ricotta and the accompanying chanterelle mushrooms kept our palates stimulated with each bite.

Then we moved on to a beef course. But this being Hari Cameron and Alex Talbot, it was not your ordinary beef course. Instead, beef was presented three ways: a small exquisite piece of ribeye, tripe marinated in kimchi, and a beef cheek lightly seared to a crisp coating. All of this was accompanied by a spicy green salsa verde of tomatoes, watermelon, and sea beans. Now there’s something we would never whip up at home! The explosions of intense and perfect flavors in this course were not to be forgotten. This dish was paired with the Dogfish 61 Minute IPA, a smooth, robust beer that went perfectly with the beef.

We were rounding the bend to the dessert course, but first we were served a powdered Kinderhook cheese course, which was presented with a beautiful beach plum sorbet over small delicate sorrel leaves. Wow!

Finally, as we thought we could eat no more, the final course arrived. A light and airy yeasted vanilla cake with a streusel topping reminded us of the cakes our grandmothers made, and shared the plate with local Bennett blueberries, a white chocolate frozen yogurt and a drizzle of caramel. We thought we couldn’t possibly hold another beer, but this beautiful dessert was paired with Dogfish Indian Brown Ale, which has a distinct coffee flavor to it. A perfect end to an extraordinary meal!

Rehoboth Beach has an incredible variety of great restaurants and chefs from which to choose, but Hari Cameron certainly has secured his place among those at the very top of their game. This Delaware native was recently catapulted into the national spotlight by being nominated for a coveted James Beard Award as “Rising Star Chef of the Year”. One dinner and you will know why he was chosen by the readers of Delaware Today magazine as 2013’s best downstate chef. To see the respect he has earned from his peers, drop by some time for “Mr. Cameron’s All American 5 and 10 Dollar Menu,” served from 10 p.m. until 1 a.m. in the season, and you will find chefs from other restaurants sampling his creative versions of comfort food. (Note: you do not have to be a chef to enjoy this treat. Anyone with a late night hunger can come in for a great meal.)

Chef Cameron is already planning a dinner in September based on Salvador Dali’s “Dinners with Gala” paintings, which will surely sell out. Watch for it, and other special dinners such as the one we were able to attend. They are all open to the public and very reasonably priced. But don’t wait for a special menu. Get yourself to A(muse) any night for a dinner you will long remember.