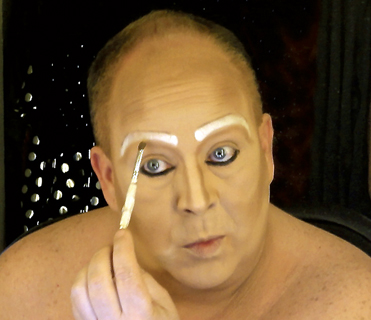 The dressing room, on the second floor of a small building behind the Blue Moon, is a long room with five identical makeup stations along the left side. Each station has a chair, a counter, and a mirror surrounded by round white lights. On the right side of the room are racks stuffed with gowns, boas, and wigs. The air conditioning is cranking. And though a red Dirt Devil vacuum sits outside the door, the carpeted floor is bedazzled with sequins and glitter.

I’ve entered this exotic venue, notebook and cold bottle of champagne in hand, to chat with Mona Lotts, arguably Rehoboth’s biggest and best-known drag queen, and the hostess of the Spotlight Show, held every Friday night at Rehoboth’s Blue Moon bar. Mona is at her station, applying makeup when I arrive at seven o’clock. I perch upon a stool and we begin to talk.

Let’s start off easy…tell me about the name Mona Lotts. I based it on Dolly Parton’s character Miss Mona from The Best Little Whorehouse in Texas. She owned the Chicken Ranch brothel. I’m a serious fan of Dolly. My surname came to me one day when a bunch of us were riding by a Big Lots store. There it was right in front of me. It just made sense. I added the extra “t.” If I’d known I was gonna get so serious with drag I’d have given it more thought.

Besides Dolly Parton, who else are your style and music influences? Vestal Goodman, the gospel singer. She had a big voice, big hair, big jewelry, and big dresses. She waved a white handkerchief while performing. I grew up in Baptist churches outside of Atlanta. Almost all my brothers and uncles are pastors, so you see why gospel is in my blood. More recent influences are Lady Gaga and Adele—let’s hear it for the big girl!

You’re a big presence yourself on the stage. I am 7’1” in high heels and high hair, and I wear a petite size 11 shoe. I won’t go any further because ladies don’t talk about their weight…

Ladies do talk about fashion. Does Mona make her own clothes?  Lord no. I get ‘em from The Fabulous Dress Shop on Route One by the High’s Dairy Story. It takes about three months to special order a dress like the jumbo petite pink one you’re fondling….

When did you start dressing up? I’ve always been a fan of the art of female impersonation. I did drag a couple of times for Halloween before it became a hobby. People said I had the sense of humor and personality to do it well, so I started performing at the drag brunch at the old Partners bar and restaurant on Rehoboth Avenue. Blue Moon owner Tim Ragan then approached me about coming over to the Moon. He had a vision back then for what entertainment at the establishment could be. And here I am eight years later hosting the Spotlight Show. I still get nervous. My greatest fear as a performer is not to be entertaining and enjoyable.

By 7:30 the dressing room is full. Five half-naked men busily apply foundation, eyeliner, and lashes, each deep into his pre-game thoughts. Drag is serious work; makeup alone can take upwards of two hours. The atmosphere is intense, almost like a locker room before a football game. Mona says it’s because we’re talking. She pours a glass of champagne for everyone, to loosen things up.

The scene is nothing like the bitchy back stage dressing room drama on the reality TV show RuPaul’s Drag Race.  When I ask what the divas think about the show, I get a consistent message: It’s made more people aware of drag and less fearful of it, but it’s not really representative of what they do as entertainers and artists.

Back stage at the Blue Moon is all about teamwork and putting on the show. Mona’s the quarterback of the team. The Big Ben Roethlisberger of the bunch. A mentor. A friend. Choreographer and conductor. And conduct she does. Five divas. Three costume changes. Fifteen separate performances. The show runs like a freight train for sixty full minutes.

Accordingly, we pick up the pace with the interview.

How many wigs do you own? Over a hundred.

Cocktail of choice? Vodka and anything.

Favorite movie? Midnight in the Garden of Good and Evil.

Quality most admired in a man? Virility.

Quality most admired in a woman? Nurturing.

Two must haves for Mona? A good nap and a good razor.

Any guilty pleasures? A pack of Smarties every night before bed.

Tell me something surprising about Mona? I’m a grandfather.

Whoa nelly! This revelation brings our round of fast questions to a close. I dive in and here’s what I learn. Mona had been married back in Georgia back in the day back when there was no Mona and only Kevin. He has a daughter and two grandbabies, ages two and ten months. A few months ago, he decided to tell his daughter about his drag alter ego, a conversation he had been long avoiding. She surprised him, however, by revealing she’d been following Mona’s career for years via the Internet and that she was proud of him. Something else to know about Mona Lotts: family is important. It’s what brought Kevin and his partner John to Rehoboth Beach.

Twelve years ago, Kevin and John decided it was time they stopped their crazy Georgia to Virginia long-distance relationship. The couple wanted to move to a beach town with some gay life, so they checked out San Diego, Provincetown, and Rehoboth. Both of them had aging parents, so Rehoboth was closest to their families. It also had the small town appeal the two were looking for.

So back to the interview…what do you like best about Rehoboth? The restaurants, obviously, and we have one of the best at the Blue Moon. This might sound corny too, but there’s a genuine friendliness about Rehoboth that I like. John and I enjoy walking on the beach. And it’s fun to explore the town on my white scooter.

I’m getting a vision…does Mona ever ride in drag? Maybe once or twice a year, on a holiday afternoon. Of course, there’s always a cocktail or two involved….

What do you like most about the Blue Moon Spotlight Show? The energy of the crowd and the entertainers. The bar comes alive and I know I’m part of something special.

It’s getting towards show time and this writer needs a cocktail. Any final words from Mona Lotts? Thank you Tim Ragan for believing in me. Thank you to all the people who come to the show. Without you, I’d be singing Dolly Parton songs to four walls. I never expect more from life or from people than I’m willing to give. I give it my all every Friday night, and I sincerely hope it shows.

Rich Barnett is the author of The Discreet Charms of a Bourgeois Beach Town. Contact Rich Barnett