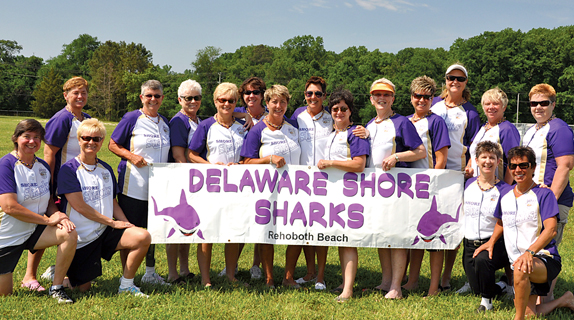 It’s A Home Run for the Sharks

A number of women in our community play slow pitch softball in the Women’s Senior Softball League. The 2013 season, which got underway at the end of May, includes the return of five existing teams and the addition of two new teams. I recently spoke to Kathleen (Kit) Ryan, coach and pitcher for the Shore Sharks, about her team and the league. Kit also is a Wealth Manager and Certified Financial Planner with KMR Financial Network, a firm she formed in 2005 after working over 25 years in corporate America in the areas of employee benefits and retirement planning. She and her partner, Denise (Dee) Pecora, live full-time in Rehoboth.

How long has the Shore Sharks team been in existence and has the roster changed a lot over the past three seasons?

Initially, Dee and I played for the Delaware Diamonds; however, there were a number of women expressing interest in playing on a team. So, with the blessing of the Delaware Diamonds, we expanded the league by forming the Shore Sharks in 2011. Since our first season there has been a terrific core group of players returning each year to the Sharks. This season we have added four players, two new to the league— Donna Girod and Lisa Lekawa.

The Shore Sharks were undefeated last year in league play. Why did you do so well?

I think a lot has to do with the chemistry of the team. There is tremendous mutual respect among the players and we have a blast cheering each other on. The team has gelled, probably because most of our players knew each other even before joining the team as we all live in Rehoboth, Lewes or Milton. Although the Shore Sharks won all its league games, we went on to play in the Annual State Games (Delaware Senior Olympics) last fall, coming in second in the tournament. We lost in an exciting game to the Delaware Diamonds by one run.

How do you keep the team motivated?

The entire team is crazy competitive, so it is not hard to motivate them. I try to play everyone about the same amount of time so there are no issues regarding who gets to play and how much. I also try to make sure that each player gets a shot at playing the position they want to play. We also talk about how the Sharks cannot go to sleep, as all the other teams want the bragging rights of being the team to finally beat us. Also, we have some very vocal players that will take over and get us fired up and we start each game with a special Sharkey cheer (think music from Jaws)! And, if the game does start to go downhill, somehow, someone comes up with a big play or a good hit and it typically it is a different player each time.

Do you think the Shore Sharks will be more competitive this year? What is the team known for? And, if you were going to play the Shore Sharks, what would be your strategy for playing the team?

We should be a stronger team this year, but returning teams such as the Delaware Diamonds, the Sand Crabs, the Alley Cats and Seaside Slammers are also very good. And, the new teams, the Sea Gals and the Beach Cleats, have talent. Our overall strength is defense, probably the best in the league. Typically, we have Helen Fausnaught, Ruth Sivils, Marge Amodei, Rina Pellegrini and Ruthie Kloetzli holding down the infield. While Deb Qualey, Dee Pecora, Kelly Walker, Tina Yocum, Pam Notarange, Joann Glussich, Clara Higgins and Viki Dee handle the outfield. Finally, with myself and Cathy Benson on the mound and Path Snyder and Donna Girod behind the plate, we are extremely solid at all positions. It is a huge asset to have so many talented and versatile players at every position. If another team is going to beat us, they better bring their sticks!

On offense, Deb Qualey is our lead-off spark plug and sets the tone for the game. Also, Helen Fausnaught is a terrific left handed hitter and generally bats clean-up. Kelly Walker has been known to hit one over the fence and we are expecting big things from newcomer Lisa Lekawa.

The Shore Sharks are lucky to have a terrific group of coaches too; Evie Simmons as statistician, Barb Hill at first base, Cindy Dellet at third base and my assistant manager Dee Pecora. In addition, Jake’s Seafood House on the Highway is our new sponsor and has been very supportive of the league.

Why is it fun to watch the teams in the league play?

All teams are now allowed to include on its roster women as young as 45; so the league is more competitive overall, with team ages ranging from 45 to about 75. We have a tremendous Commissioner in Gail Parr, who really goes the extra mile in organizing the league and publishing a weekly newsletter. Also, the games are filled with great plays, both defensive and offensive, as most of the women have played some softball in the past. And, there is a strong fan base with the players’ friends, families, and of course the Viki Dee fan club coming out to watch all the teams play. The league plays on three fields on Tuesdays at Sports at the Beach in Georgetown starting at 6:30 p.m. If teams finish up early, they always go watch the other teams play—it is just a very social atmosphere. Impromptu tailgate parties seem to pop up every week. Admission is free and everyone is encouraged to come out and enjoy the games. You can even bring your doggie.