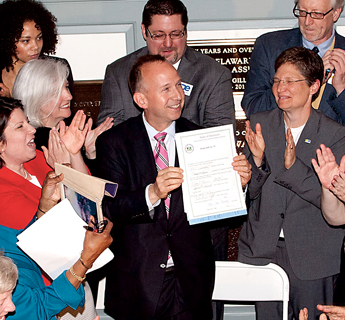 I Do, I Do! Marriage Equality in Delaware

On Tuesday, May 7 the Delaware Senate passed the Marriage Equality Act with a 12-9 vote; minutes later, Delaware Governor Jack Markell signed it into law. Even though we had high expectations that the bill would pass, the moment it did, the excitement rippled across the state—and the country—spreading out from Legislative Hall via Twitter and Facebook.

It was a thrilling moment for all who believe in equality. We are grateful to everyone who worked to make it happen, especially the team from Equality Delaware led by Lisa Goodman and Mark Purpura.

Though “The First State” is not the first, or even the tenth, state to pass marriage equality, (Rhode Island beat us by just a few days!), we are proud to be number 11; happy just to be counted in the growing number of progressive states looking out for their LGBT people.

The new law will take effect on July 1, and already, questions and comments about the process of getting married are coming to CAMP Rehoboth. (In answer to one of them, no we are not planning a group wedding event here at CAMP Rehoboth.) Applications for licenses will be available 30 days prior to the July 1 date, so anyone wanting to be first in the state can be ready to go at 12:01 a.m. on July 1.

Sussex County Clerk of the Peace John Brady, a longtime friend of CAMP Rehoboth, announced on the day after the passage and signing of the Marriage Act that his staff was already at work preparing for the transition. (Press information from his office is available on the next page.)

Here at CAMP Rehoboth, we’ve been working for equality with folks across the state for 23 years. Like a snowball that starts off small and gradually builds in size and strength, LGBT equality in the State of Delaware has slowly built in momentum. In 1997, Governor Tom Carper, in front of the Rehoboth Beach police station, signed a bill that added sexual orientation to existing hate crime legislation. Following that, it took 11 years to pass the Employment Non-discrimination Act. Governor Markell signed that into law at CAMP Rehoboth in 2009. Then in 2011 the Civil Union Act was passed (and signed into law at the Queen Theatre in Wilmington). Now we have full marriage equality!

In the last few days, I’ve almost had to pinch myself to believe that we have made such progress. For a long time, we’ve felt attitudes shifting around us, but the pace was as “slow as molasses” as we like to say in the South. Now change seems to be happening at speeds that would have been unimaginable only a few years ago: Don’t Ask, Don’t Tell; the President, Vice President, and most of the Democratic Party (and a few Republicans, too) supporting marriage equality; and the potential impact of the Supreme Court hearings on Prop 8 and the Defense of Marriage Act coming up in June.

Now there is the very real possibility that we could actually have full marriage benefits from the federal government!

Now Steve and I have really got to plan that wedding we’ve been putting off for a year and a half!

I don’t know why we find it so difficult to do. One day a quick elopement seems the easiest way to go; the next day I’m back to wanting to write a ceremony that celebrates our 35 years together. On the one hand we want something quiet and simple; on the other, we want all our family and friends and CAMP Rehoboth members and volunteers…and then we panic, and we’re back to a quick elopement (even though my nephew Drew has given us an ultimatum that we absolutely cannot have a wedding without him).

Maybe I just never really believed we would get to this point in our lifetime. Now it’s real.

In the end, it really doesn’t matter how we celebrate our union; Steve and I have felt married since we met. Now the wonder is that the world around us is beginning to recognize our relationship and the fact that love is love in whatever form it takes.

The Civil Union Act was progress, but it was a stepping stone to Marriage Equality. Reporters have asked both Steve and me in the last week why, since both bills gave us the same benefits, marriage was more important.

I don’t think I explained it very well, and my answer should have been: because there is no such thing as separate but equal. Anyone who has ever had to use a separate bathroom, or attend a separate school, or sit in the back of a bus knows that.