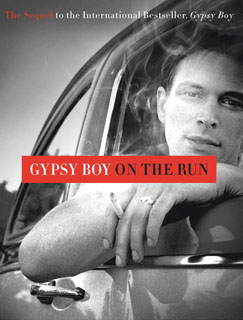 No help, no raise, no sympathy, what you really need is to get away. And so did author Mikey Walsh but, as you’ll see in his new memoir Gypsy Boy on the Run, he escaped certain death.

Growing up in Europe’s Romany culture in the 1980s was wonderfully idyllic for Mikey Walsh—for awhile.

As a young boy, Walsh played with his sister, danced to his mother’s favorite music, made mischief with cousins, and loved to dress up. But since Walsh was the youngest in a line of Gypsy fighters, his father started “training” him early to use his fists. That meant daily beatings, sometimes more, until Walsh was a teen.

By then, he realized he was gay and he knew his father would kill him if he found out. So, with the help of Caleb, a man he’d fallen in love with, fifteen-year-old Walsh escaped in the middle of the night.

But his father wasn’t going to let him go easily.

Within days, a “five grand” bounty had been put on Walsh’s head, and Caleb was being stalked. Terrified, they moved Walsh from place to place until he finally found safety in a town where he hoped his father wouldn’t look. Walsh found a job, but he lost Caleb to the pressure of constant threats.

With the familial situation eased a bit, Walsh seized opportunity to change things he didn’t like about himself. Though proud of his Gypsy heritage, his way of speaking became more “Gorgia.” He made friends and learned to embrace his sexuality. He was confident enough to move even farther away from his family’s influence, to find a good job and a safe apartment. He’d stopped living with paralyzing fear, he learned to read, and he enrolled in acting classes.

He cautiously began to forgive his father.

At the end of last years’ Gypsy Boy—which I absolutely loved—author Mikey Walsh teased his readers by letting it slip that there was much more to his story. He didn’t elaborate, and I wondered if he could deliver on that delicious tantalization.

I shouldn’t have doubted.

Beginning with a brief recap that also serves as a summary for those who missed the first book, Walsh wastes little time before pulling readers into a terror-filled account of the months in which he was always just a half-step ahead of his father’s fists—and yet (this amazed me), he manages to keep a sense of humor about what happened. He presents his story with no poor-me, no sympathy-begging, and a voice that’s calm and matter-of-fact. The lack of whining is oh-so-refreshing in a book like this.

Yes, this memoir contains some repetition, but that minor annoyance is overpowered by a Part Two tale that’s every bit as stellar as its predecessor. If, therefore, you’re searching for something for vacation, weekending, or just because, Gypsy Boy on the Run is the best escape.