It Really Does Get Better! 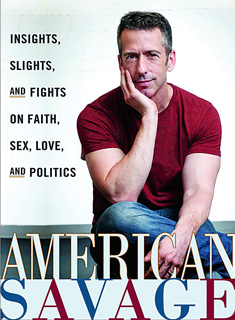 You can’t talk about it to anyone.

You’ve got this sticky issue, a little problem, a thing you need help with but you aren’t sure you can trust anybody. Your sister is a big-mouth, your mom won’t understand, and your BFF, well…no.

You need help in the form of advice. You need it straight-up, no bull, all honest. And when you read American Savage, the new memoir-advice book by Dan Savage, that’s what you get.

As a young boy growing up in Chicago, Dan Savage was steeped in Catholicism.

His father, a cop by profession, was an ordained permanent diaconate. His mother was a lay minister. Savage himself was an altar boy but when he realized he was gay and that the Church had a few things to say about it (none positive), he left the fold.

Still, he says, “… I was never abused by a priest. I was saved by one” who came out to Savage’s mother to calm her fears for her son. And though the Church “got sex wrong,” and though he’s an “agnosthatheist,” Savage says he “aches” for the loss of religious comfort.

But that’s not all he has on his mind in this book.

As the creator of Savage Love, a sex-and-relationship column, Savage is fierce about making sure his readers get sensible advice. He says that cheating, for instance, isn’t okay except when it is. He advocates being monogamish, being GGG, and being willing to at least try something before condemning it as “too kinky.”

Speaking of condemning, Savage takes on politicians, especially those who are right-wing, conservative, and Christian; in particular, he quotes evidence to dispute the anti-gay bigotry that often comes from that side of politics. As a married “different kind of fag” and the father of a teen who “came out…a few years ago—as straight,” Savage has a stake in quashing that kind of hate.

In this book, Savage also writes about adoption, Halloween (the straight people’s version of pride parades), “basic civil rights protection,” God, and respecting older gay men. As founder of the It Gets Better Project, he goes to bat for LGBT teens. He writes about sex, a certain politician’s “Google problem,” and he offers a challenge to those who believe being gay is a “choice.”

It’ll be hard to remain seated while you’re reading, in fact, because author Dan Savage makes you want to stand and applaud at his common-sense words. Savage rants—but he’s hilarious while he’s doing so, which will make you want to phone friends so you can share. He’s profound and profane, thoughtful and thought-provoking, and his personal stories will bring tears to your eyes.

I truly enjoyed this book. I liked it for its truth, for its snark, and for its not-so-good-natured poking at politicos—and I think you’ll like it too, because American Savage is a book worth talking about.