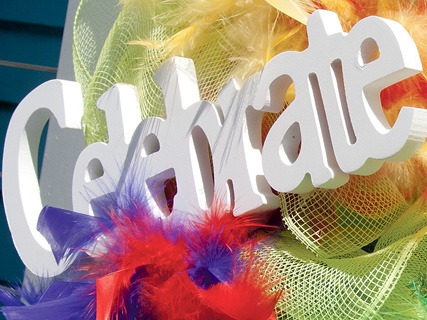 I’m writing on the Saturday of Memorial Day weekend.

All over town folks are waking up to gorgeous sunshine but almost autumn-like temperatures; it’s chilly and breezy outside, and nothing like last year’s early summer heat wave. Still, summer has arrived, even without proper temps just yet, and on this first day of the high beach season, I’m excited and nostalgic all at once.

Living on Baltimore Avenue in downtown Rehoboth Beach as we do, Steve and I are always aware of seasonal change on the street. Yesterday, as the afternoon turned to evening, the energy on the street began to pick up steadily, and fragments of conversation, random bits of laughter, and the occasional boom boom boom from nearby bars and restaurants could be heard drifting on the breeze. It was nice, and oddly comforting to hear life on the street slipping back into summer mode. We sat up late (for us), playing cards and chatting about the summer while we waited for our house guests to arrive.

I say “house guests,” but really, I should say “family.” My sister Mary Beth Ramsey (and her husband Bob who was not with us this weekend) and our dear friend (and other sister, as we like to say), Sondra Arkin, are more like house mates in the summertime, and welcome whenever they can make it to the beach. They have all three worked long hours for CAMP Rehoboth and Sundance over the years, and are an integral part of our extended Rehoboth family. It wouldn’t be summer without them.

For years now, I’ve done my morning exercises in my studio. Nothing fancy, I put on some dance music and hopefully, if we’re not too busy, at least get in a half an hour before heading to the office. This morning, Sondra was up almost as early as I was. “Let’s dance!” I said, and invited her into the studio. So for 30 minutes we cranked up the energy and danced full out. It was fun, and a great way to start the day and the summer.

Dancing this morning reminded me that we have a lot to celebrate this summer!

Just think about it! In the last month, Rhode Island, Delaware, and Minnesota have all passed marriage equality bills. Illinois may be next (possibly while this issue of Letters is being printed)—and we have great expectations that DOMA will fall. It’s hard not to be excited these days, as poll after poll shows that a majority of Americans now support LGBT equality. It’s been a long time coming, but now change seems to be happening so fast we can hardly believe it. Even when setbacks occur, and they will from time to time, we are still moving in a forward direction.

President Obama continues to play a huge role in setting the tone for changing attitudes on LGBT issues. The inclusive language he used in his recent commencement address to the all-male, historically black students of Morehouse College was as powerful as anything I’ve heard lately. “Morehouse brother,” he said, “Be the best husband to your wife, or boyfriend to your partner, or father to your children that you can be.”

Then there’s the Boy Scouts, who just voted to allow gay scouts but to continue to ban gay adult leaders—perhaps not a full out celebration for us, but a step (or at least a sidestep) in an almost right direction.

As we head into the gay pride celebrations of June, we have good reason to be joyful—and proud of the progress we have made in our lifetimes. From the repressive 1950s and ‘60s through Stonewall and on to the modern LGBT equality movement, the world has been, and still is being, changed. That would never have happened with the countless individuals who were brave enough to come out of the closet and be open and honest about their sexuality.

My friend (and above dancing partner) Sondra, is straight. Recently she accompanied a friend on a lesbian Olivia cruise. She had a great time, but still found it interesting that she had to keep “coming out” as a straight woman—not something she normally has to think about.

For LGBT people, on the other hand, coming out can be a constant process—at work, at school, even when introducing a spouse—there’s always that brief moment while we wait to see what the reaction will be. Coming out is the heart of the gay pride movement, and in those magic words from La Cage aux Folles, until we can say, “Hey world, I am what I am,” there’s not much to dance about.

Here at CAMP Rehoboth we do have much to dance about, and we continue to celebrate our volunteers, donors, members, sponsors, and committees. We are, in many ways, still a volunteer driven organization, and our relatively small paid staff depends on their efforts to do much of the work. Over the last few years, the Board of Directors of CAMP Rehoboth has worked to expand and develop its committees and leadership, and in many areas we’ve had great success. In the CAMP Report 2012 on page 44 of this issue, committee and team chairs report on the work accomplished in 2012.

Surviving the recession and subsequent years of slow economic growth was difficult for many non-profit organizations. Like others, we cut expenses and worked to increase revenue. Thanks to the incredible support of this community, our membership continues to increase, and we’ve had great support in our other fundraising efforts. We are a community organization and we depend on the time, talent, and financial support that comes from our community.