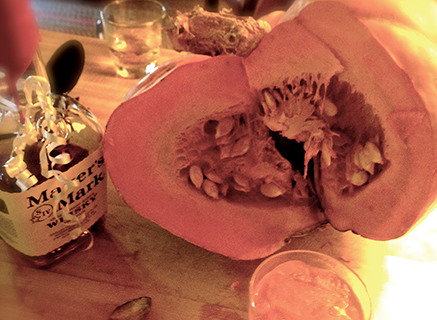 I haven’t thought seriously about pumpkins since the time I hauled a two hundred pounder from Washington to New York aboard the Amtrak Acela. My focus then was on size and mobility, not color, texture, or taste, which is what everyone today seems obsessed with when it comes to pumpkins.

Bumps, lumps, and wrinkles. Mottled skins in designer shades. Contorted necks. Sugar warts. Smooth unblemished skin is passé in the heirloom fruit and vegetable world. I just hadn’t realized the extent to which it had penetrated the pumpkin patch.

I shouldn’t be surprised. People like something unique, which is why the food magazines this time of year are full of recipes celebrating heirloom harvest holiday flavors and why I was almost trampled one night recently at the Whole Foods Market in Washington by a couple of gay guys going gaga over Ben & Jerry’s limited edition Pumpkin Cheesecake Ice Cream. I’ve seen articles touting pumpkin pancakes, pumpkin fries, pumpkin bagels, pumpkin chili, and pumpkin tacos. Seems there’s even pumpkin hummus among us.

Pumpkin-flavored products account for more than $290 million in sales each year in the U.S. alone.

Most of these pumpkin concoctions turn my stomach, evoking memories of overheated holiday parties and scented candles. Then one evening I happened upon a drink recipe in my favorite magazine Garden & Gun. It called for a “healthy dose” of bourbon with a splash of homemade pumpkin reduction. This seemed like a cocktail I might want to try.

I needed first to find a good “drinking pumpkin” so I paid a visit to the Tomato Sunshine garden center and farm market on Route One just outside of Rehoboth. Owners Ernie and Donna were said to be quite knowledgeable about heirloom pumpkins and I’d heard they were importing them from the Amish farmers coop in Lancaster, Pennsylvania.

Ernie, everyone’s favorite hunky gardener, was pleased to show me around the pumpkins. First up was a large, lumpy, grayish-blue one that kind of reminded me of an uncooked turkey. It was a “Blue Hubbard” squash. Its sweet meat is often used as commercial pumpkin pie filling. There’s a “Red Hubbard” too, but rounder and lightly warted.

In case you’re wondering, all pumpkins are squashes, but not all squashes are pumpkins. Pumpkins tend to refer to squashes with woody stems, hard skins, and colors that tend towards orange. They’re indigenous to the western hemisphere and helped sustain early European settlers. Warts and bumps occur naturally when sugars build up in the skin as a pumpkin ripens. Breeders today are genetically engineering even bumpier ones.

One of the most attractive heirlooms on the Tomato Sunshine lot was the “Fairytale” pumpkin, which is sort of flat, with high, deep-ridged cheeks. True to its name, it resembles the pumpkin carriage in the fairytale Cinderella. This is old French varietal that mellows from green to orange and then into a rich brown color as it ages. The “Cheese Pumpkin” is relatively smooth and looks very much like a wheel of cheese. A related version grows with a neck and is said to be the ancestor of the butternut squash. The Amish like to bake with this pumpkin.

When I asked Ernie which pumpkin might be best to cook down into a reduction for a cocktail he wasted no time in recommending the rather homely Delaware-grown “Rascal” because “the meat is thick.” With his foot raised up and rested on the pumpkin cart and his hand strategically placed on his upper thigh, I didn’t know what “thick meat” he was referring to. I took his word for it and bought the “Rascal.”

If you’d like to impress your friends with a sophisticated pumpkin cocktail this holiday season, here’s my version of the Garden & Gun recipe for “The Smashing Pumpkin” cocktail.

Ingredients: 2 ounces of Maker’s Mark Bourbon, one and a half ounces of the pumpkin reduction (see recipe below), and one dash of Angostura Bitters.

Preparation: Pour bourbon, pumpkin reduction, and bitters into a mixing glass (I use a big Pyrex measuring cup) and fill with ice. Stir generously. Strain into an old-fashioned glass with a couple of nice-sized ice cubes.

Here are the ingredients you need to make the pumpkin reduction: 1½ quarts chopped pumpkin, 2 quarts water, 3 cups sugar, 10 cloves, 7 whole allspice, 1 cinnamon stick, and 2 whole star anise. Next you scoop out the pumpkin seeds and pulp. Peel and chop the pumpkin flesh into small one-inch cubes. Add all ingredients in a non-reactive pot and bring to a boil. Simmer for 40 minutes until reduced. Strain the mixture into a clean bowl and place in an ice bath to cool.

To Ernie’s credit, the Delaware pumpkin made for a good drink. The cocktail was much like a Manhattan with the pumpkin reduction substituting for the sweet Vermouth. While one could certainly taste the pumpkin, it was subtle and sophisticated and definitely not like drinking pumpkin pie.

The cocktail also lived up to its name, as everyone sipping on it at my afternoon luncheon party on the front porch got quite smashed. One guest, who shall not be named, staggered home with a cocktail in hand and half a pumpkin under his arm. Instead of taking a nap, like the rest of us did, he got out his biggest and sharpest knife and started cutting up and baking the pumpkin. He could have killed himself and nobody would have known.

Yes, it’s the pumpkins’ moment in the limelight. Get ‘em now though if you want to experiment with pumpkin cocktails because even though they will last for several months, they start to disappear from the supermarkets and roadside stands as everyone’s attention shifts from the orange holidays to the red and green one.

Rich Barnett is the author of The Discreet Charms of a Bourgeois Beach Town. See more Rich Barnett.