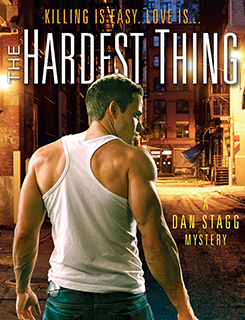 Is Love the Hardest Thing?

Once upon a time, you thought you were in love.

You could swear you heard violins when you met him. Your heart pounded and your palms got sweaty. Totally twitterpated, you couldn’t think about anything but him, all day, all the time.

And then you fought, he left, you cried, and you wondered why love is a complicated mess. Or, as in the new book The Hardest Thing by James Lear, why does it have to be so deadly difficult?

He was angry, but not altogether surprised.

Dan Stagg, former major in the U.S. Marine Corps, former bouncer at an East Side club, former soldier in Iraq, was once more unemployed. He couldn’t control his temper again and it led to a bar fight, but nobody called Stagg a “faggot.”

Gay, yes. Queer, maybe…but not that.

Guys like Stagg, however—guys with nothing to lose, who know how to get things done—don’t stay unemployed for long. Two days after the fight, a movie-star-looking man showed up at Stagg’s door, and made him quite an appealing offer.

A very wealthy individual who had “enemies” wanted Stagg to act as bodyguard to his secretary by taking the young man away, out of town, and out of danger. There was a considerable amount of money involved for the service and absolute secrecy was of the utmost importance but when introduced to the kid, Stagg immediately knew two things: Stirling McMahon was a spoiled brat. And there was never any dictation involved for this “secretary.”

Still, a job was a job and Stagg intended to do what he’d been hired to do. He never intended, however, to sleep with McMahon but he couldn’t resist. McMahon, who finally admitted that his name was really Jody Miller, was a delicious little thing with an equally delicious behind.

Stagg knew he was old enough to be Jody’s dad. He knew that professionalism was key in this whole job. He knew that there was danger, that somebody wanted Miller dead, that his life was on the line, and that he shouldn’t take risks.

He knew that he was falling in love with Jody Miller…

On its own, The Hardest Thing is a first-class mystery-thriller.

Major Dan Stagg is a hard-bitten character with a strong sense of duty and an even stronger sense of sarcasm that very much appealed to me. I could’ve read another 200 pages with Stagg in them.

But then author James Lear gives his readers excitement of a different sort: in between the mystery plot, you’ll find lengthy passes of erotica that give Stagg another level of personality and that give readers a little steam to read. What’s nice is that the explicit sex in here isn’t gratuitous; it fits with the plot and with the character, which is a pleasant surprise in many ways.

This might make a nice change-of-pace for erotica fans and mystery lovers alike, so if you want a book that packs heat, grab this one. The Hardest Thing shouldn’t be hard to find.