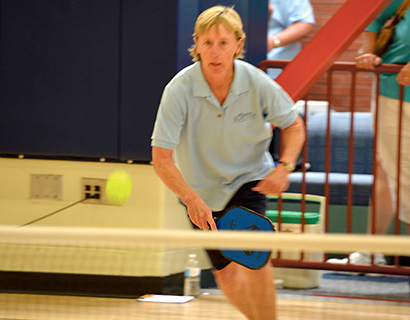 Not in a Pickle!

Rehoboth women go for the gold, silver and bronze—and come back winners!

For the past several years, many area tennis courts have lay dormant, with lots of women over a certain age leaving the game behind for the likes of golf and bowling. But now, not only is there new life on the tennis courts but indoor arenas are also bursting with pickleball activity.

Yes, you read correctly, pickleball, And it has nothing to do with dill pickles or delicatessens. Pickleball is a paddle sport which combines elements of badminton and tennis. It’s like a mini tennis game, played on the size of a badminton court with flat graphite paddles and a ball similar to a wiffle ball. It is one of the fastest growing sports in the U.S. and is also played internationally.

And while the noise made by the ball getting whacked by the paddle sounds lethal, it’s actually much less intense than a tennis match.

Pickleball, introduced to Rehoboth by some snowbirds from the Carefree community in Ft. Myers, Florida (where it is practically a religion), and other sources, hit the beach with a giant explosion of activity, social interaction, competitiveness and plain old fun.

The Sawgrass Women’s Pickleball Club, plays and practices at the Sawgrass South Community outdoor tennis courts as well as indoors at Epworth United Methodist Church. Only in existence for about a year, the Club has taken off with a shot, recently scooping up most of the medals in the Delaware Senior Olympic Pickleball Games at Delaware State University in Dover.

So what’s pickleball all about? A pickleball ball typically moves at one-third of the average speed of a tennis ball with the court just under one-third of the tennis court area. Originally invented as a backyard game, pickleball is now an organized sport with national and international governing bodies. The U.S. Pickleball Association estimates there are more than 100,000 active pickleball players in the country.

Rehoboth’s Sawgrass Club boasts over 40 members, almost all players new to the game. On Sept. 14 and 15, the Sawgrass Club saw 24 of its members (along with a cadre of cheerleaders) join the 109 men and women participating in the Senior Olympics from Delaware, Maryland, and Pennsylvania.

A dozen Sawgrass teams played in the Women’s Doubles in age categories from 50+ through 70+ and four members entered the Singles competition, also in age groups.

Right now, the Sawgrass Club is closed to new members because it cannot accommodate more players on existing courts. But other teams are opening up in the area, and the sport is here to stay.

So next time you drive past a busy tennis court, take a look. If you assume it’s tennis, you’ll probably be in a pickle.