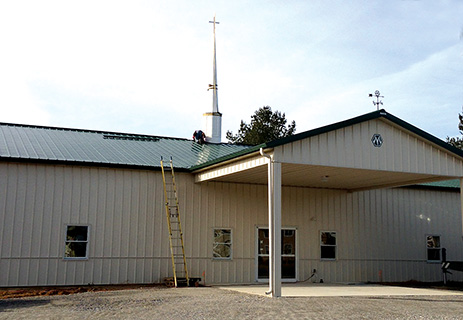 For a lot of area worshippers, the upcoming dedication and consecration of the Metropolitan Community Church (MCC) building on Plantation Road is, in the words of many, “amazing!”

When Rev. Nancy Wilson, head of MCC Worldwide, leads the worship service at 10 a.m. on Sunday, Sept. 28 at the new building, and officially dedicates the church at 3 p.m. that afternoon, it will be a dream come true for the congregation.

Currently, Rev. Dusty Pruitt is the interim pastor for MCC Rehoboth and founding pastor Dave Patterson is in the process of being named deacon. MCC is currently seeking a Standing Pastor for the congregation.

This local arm of MCC has come a long way since its founding in 1991. That’s when Patterson, a parishioner of MCC in Washington, DC, moved to the beach and told his pastor, the late Rev. Larry Uhrig, that he loved his new hometown but missed his church.

“So start one!” Rev. Uhrig said. And Patterson did just that.

The congregation took shape in May of 1991 with three founding members, meeting in, of all places, the late-lamented Renegade bar and lounge at the entrance to Rehoboth, where townhomes now stand. Then, the trio, Dave Patterson, Tony Warren and Mike Shilling had a conversation on the patio of the Shore Inn on Rehoboth Avenue Extended, with church elders from the MCC of Washington, DC.

From that meeting, plans went into place to start a summer ministry. Beginning as a parish extension of the D.C. Metropolitan Church, the fledgling congregation picked up a few members here and there as they shuttled between services at make-shift locations like Sand in My Shoes B&B (now the Canalside Inn), the lobby of The Strand nightclub on Rehoboth Avenue (where retail stores now stand) and back again to the Renegade.

Dave Patterson remembers setting up for a church service in The Strand lobby as men were emerging from dancing all night upstairs. “We went anywhere we could find space,” Patterson recalls.

And what started in Rehoboth 22 years ago as a summer ministry soon grew to a congregation of over 50 people, holding church services year round. Patterson, who really enjoyed his leadership role soon started taking correspondence courses and courses in leadership sponsored by MCC Church. Patterson was eventually ordained and led the church until 1998.

Nationally, MCC itself was started in 1968, a year before New York’s Stonewall Riots. Rev. Troy Perry, a Pentecostal minister defrocked due to his homosexuality gathered 12 people in his California living room. That first worship service in a Los Angeles suburb launched the international movement of Metropolitan Community Churches.

Over the years since, as MCC branched out to become a worldwide organization, the Rehoboth congregation grew and thrived. It went from being an offshoot of the D.C ministry, to its own organization, to owning its own church property.

In 2000, a congregant loaned money to the church for the initial purchase of some prime property along Plantation Road in Rehoboth. MCC was on its way to having its own building.

“It was always my dream to have the ministry, but I never really imagined our own building,” Patterson says. “Now, for me, it’s an amazing thing to have our own place and not wonder where we will be.”

It took years of fundraising and perseverance, but the new building is up and running. There is a 150 seat multi-purpose area for services and receptions, classrooms, a play area, kitchen, large parking area, and more.

“The acoustics are perfect,” Patterson says, “we don’t even need microphones.”

Parishioner Evie Simmons says, “I first attended MCC Rehoboth in 1999, and knew immediately that I was in a special place. There have been trials and tribulations over the years and many, many leaps of faith, which have all made us stronger and perhaps more dedicated to seeing our church home become a reality. My partner Barb Thompson and I are so proud to be members of MCC.”

And on Sunday, Sept. 28, when Rev. Nancy Wilson, leader of the worldwide MCC movement comes to town to dedicate MCC Rehoboth, history will be made here at home.

“It’s been an incredible effort by so many people to get us where we are today,” Simmons says. “and there is still much to do.”

But the congregation is hoping that many local residents come to the dedication of the church building to see and hear what MCC Rehoboth has to offer. “God’s love for all has always been at the center of our church’s true core and that has never wavered,” Simmons says.

Welcoming to all, MCC invites the public to both the Friday night concert (free of charge, but donations welcome) and the Sunday 10 a.m. service and 3 p.m. dedication. The church is located at 19369 Plantation Road in Rehoboth.