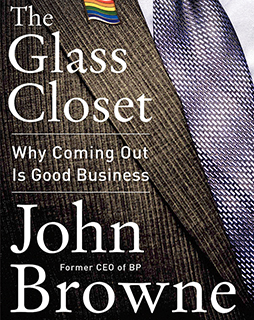 The view from your office is quite magnificent.

When you moved into that space, you also got the perfect desk, a credenza to match, and a plushy, throne-like chair. It’s a workspace anyone would envy.

Yes, your office is well-appointed. But your closet…? Not so much. Therefore, according to John Browne in his new book The Glass Closet, maybe it’s time to come out of it.

Starting as a young man in 1969, John Browne rose through the ranks at oil-giant BP until 2007, when he resigned as chief executive. He might’ve still been there, if not for an unfortunately splashy scandal that seems tame today: Browne is gay. When “a tangled skein of allegations” pulled him out of the closet, he resigned from his job, fearing that his life was over.

Obviously, it was not, but he discovered that his experiences aren’t unusual.

Even though there have been strides made, and though nearly all Fortune 500 companies have in place policies to prevent discrimination based on sexual preference and identity, more than 40 percent of American LGBT workers remain closeted on the job. According to a survey, 90 percent of transgender employees report problems at work.

“Years of progress have reduced the risk of harassment,” says Browne, “but they have not completely eradicated it.” Coming out is still risky, as evidenced by the interviews he completed with people who mostly asked that their last names not be used.

Businesses, Browne says, should understand that inclusion levels the “playing field” and widens the choices available in the “war for talent,” something Fortune 500 companies already know. Extending benefits to same-sex partners serves to retain workers, and policies supporting LGBT employees also send a positive message to other minority groups. Marketing and ad departments must remember that the LGBT community is “traditionally under-served” but represents an “often sizeable opportunity.”

As for LGBT workers, Browne recalls how much effort it took to keep his secret, and how much it weighed him down. Still, “[n]o matter how skilled you think you are at hiding your true self, those closest to you…will see you through the closet door.” Coming out is risky, but “the risk will be worth the reward.”

Seemingly meant for business, The Glass Closet is not exactly business-related for the first third of it. Instead, author John Browne begins with his life story, and a tired LGBT history that includes little-to-nothing about the world of work.

That doesn’t leave much room for biz-related information in this too-short book—but getting past those first pages is where the irritation subsides. Browne continues by offering eye-opening stats; several interviews to prove that there are others experiencing similar issues; and points to ponder, interspersed with helpful info for employers and employees, both LGBT and straight.

If you’re interested in a biography, that’s here. The real appeal of this book, though, I think, is for the starter help it offers, and the modicum of support. For those small, brief, shaky reasons, The Glass Closet is worth a look-through.