Lorne Crawford of Crawford Auction Company, returns to make the Sundance  Auction another great success. The first night of the big Sundance event at the Rehoboth Beach Convention Center this Labor Day weekend is a live and silent auction featuring over 500 items, including a sensational, two week, European Celebrity Cruise for two (private balcony stateroom and including port charges and taxes!) from Accent on Travel.

The CAMP Rehoboth Chorus will begin rehearsals for its new season in September. The concert, to be held in February of 2015, is entitled, And The Winner Is, and features award winning songs. For further information about the concert or becoming a member of the chorus, contact chorus secretary, Bob Hoffer, or call the CAMP Rehoboth Community Center at 302-227-5620. 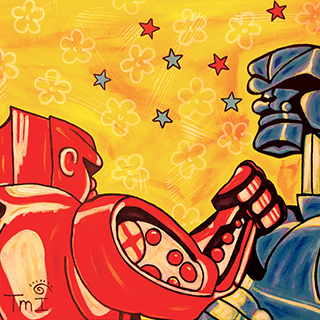 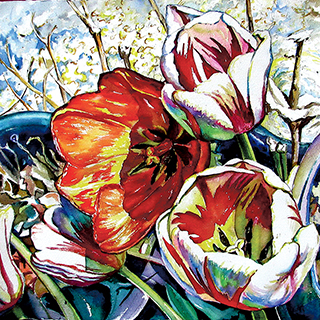 Local Rehoboth Beach artist Terry M. Isner will exhibit his new show Toys in the Attic at the CAMP Rehoboth Community Center, August 9-September1, with an opening reception on August 9 at 6:30 p.m. This is Isner’s sixth solo show and his third at CAMP Rehoboth. CAMP Rehoboth is no stranger to the local art world, and hosts monthly shows that Isner has helped curate.

August 14-September 18, the Back Porch Café will present New Work by Rodney Cook, with a reception with the artist on Sunday, August 17, 4-6 p.m. Rod’s Lifeguard 1 appears on the cover of this issue of Letters from CAMP Rehoboth.

Shown above: No More, No More, acrylic on paper by Terry Isner, and Red and White Tulips, watercolor, by Rod Cook. For more information, contact CAMP Rehoboth or the Back Porch Café.

Tim Lewis and Barb Brewer of the Atlantic Sands were joined by Southern Delaware Tourism Director Scott Thomas at the grand opening of Cellar Door, the Sands newest restaurant on Baltimore Avenue.

Cat and Mouse Press has announced Joseph Crossen of Dover as the winner of the 2014 Rehoboth Beach Reads Short Story Contest. His story, The Case of the Artist’s Stain, was part of the theme “The Boardwalk.” Mr. Crossen is pictured above accepting the first-prize award from Susan Cox McAnelly, store manager at Browseabout Books on Rehoboth Avenue. 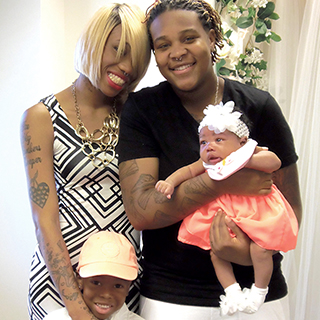 As participants in the CAMP Rehoboth Wedding Witness Program, Dottie Cirelli and Myrna Kelly were pleased to be able to witness the recent marriage of Deneisha and Ariel Thomas.

The Clear Space Theatre Company of Rehoboth Beach has announced that author Del Shores—creator of their summer hit, Sordid Lives and frequently called “the grand master of Southern lowlife sensibilities”—will be appearing at the theatre Friday, September 5 and Saturday, September 6. Mr. Shores’ appearance is sponsored by Atlantic Sands Hotel and Conference Center.

Friday evening the production of Sordid Lives will feature a pre-show reception with hors d’oeuvres catered by Hobo’s, complimentary wine and beer, champagne and desserts at intermission, and a question and answer session after the show. Tickets for the Friday performance of Sordid Lives, including the reception, are $50. Saturday evening, Mr. Shores will present his one-man show My Sordid Best at 10 p.m. following that evening’s performance of Sordid Lives. “The censors will be absent, the language will be crude, the stories will be raw, and if you are offended, that's your choice!” Del warns. Separate tickets are required for the show and post-show. Tickets for Mr. Shores’ special Saturday evening presentation of My Sordid Best are $25.

The Clear Space Theatre is located at 20 Baltimore Avenue in Rehoboth Beach. All tickets are available through the Clear Space box office at 302-227-2270 or online at ClearSpaceTheatre.org.