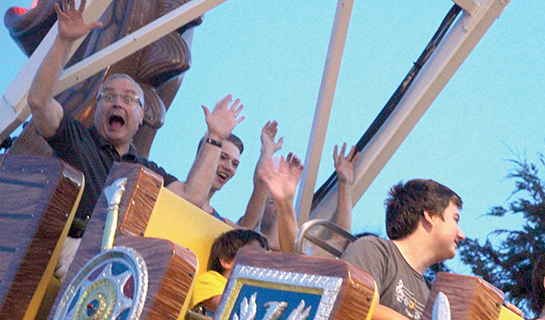 Photos: Rev. Frank Schaefer at Epworth; Riding the Sea Dragon at Funland; Rehoboth Beach historical sign;Kaden Riley-Spillane on the day of his adoption.

A snapshot captures a particular point in time.

These days practically everyone has a camera with them for all their waking hours—and I suspect even their sleeping ones, as evidenced by a recent Huffington Post report describing a 13 year old Texas girl whose cell phone ignited under her pillow.

If a picture is really worth a thousand words, the level of our collective communication must surely have multiplied rapidly in the last decade. On the other hand, perhaps our excessive use of smartphone cameras has resulted in the devaluation of a picture. My guess is, that last selfie I just saw posted on Facebook was not worth more than a few measly words at best.

Then again, another oft quoted line, “beauty is in the eye of the beholder,” reminds me that each one of us witnesses the world through our own experience and perceptions. Like the filters present on our smartphones, our world view is easily colored by the lenses through which we view it.

A snapshot captures a particular point in time.

As I sat down to write this column, I thought about all the photos I’d been taking all summer long, and I went back to June 1 and started scrolling through my files. Certainly, there were many CAMPshots (close together, on the same level, and smiling), and from every imaginable event. That’s not what I was looking for, though they did tell the story of where I’d been over the last few months. No, this time I was looking for something that gave me a different perspective on this summer, on this particular time, and in this particular place.

In the end I pulled out 11 photos, oddly mixed, that created a snapshot of the summer, so far. Here are a few of them.

Snapshot 1 was Reverend Frank Schaefer when he spoke at Epworth United Methodist Church on June 16. Rev. Schaefer had been defrocked by the United Methodist Church for presiding over his son’s same-sex wedding ceremony. Shortly after his very moving appearance at Epworth, a nine-person appeals panel ordered the church to restore his pastoral credentials. Just recently, the Church appealed that decision to its highest court, the Judicial Council.

I bring this up not because I’m a Methodist, but because I think this individual struggle is representative of one taking place in the world around us. The United Methodist Church is not the most liberal denomination; it is not the most conservative one either. In fact, my guess is that it falls right in the middle of the liberal/conservative continuum. On the one side are United Methodists Churches (like our own Epworth UMC), who support full inclusion by LGBT people in the church. On the other, are those who stand firmly on the principal that homosexuality is incompatible with church teaching. Stalemate!

That religious divide, is precisely where our efforts are most needed right now.

Snapshot 2 was at Funland on June 20, and I didn’t actually take it myself. My gay, 15 year old nephew Max was visiting Steve and me all month, and his gay cousin Drew and his new boyfriend Joe had come over from DC for the weekend. Riding in the back seat of the Sea Dragon with our hands in the air is a summer tradition for us. Steve and Max and I climbed aboard. Drew and Joe took the camera. It was dusk, and the motion on the Seadragon made it difficult to get a clear shot, but there we were, all three of us with hands in the air laughing our heads off.

That shot made the cut because of the story behind it. In was a busy Friday night on the Boardwalk, and as we stepped into the crowds, I noticed that Drew and Joe were holding hands. For an instant our entire Rehoboth history flashed through my head. I remembered a terrible gay bashing on the Boardwalk in the early 90s, I remembered all the years that CAMP Rehoboth and the city police have worked to create a safe environment in this town, and I remembered that all my nieces and nephews believe that Rehoboth Beach is truly the open and welcoming place we have made it out to be. “God, please let them be safe,” was all I could think in that moment. I was proud. I was, for an instant, terrified.

Snapshot 3 was the City of Rehoboth Beach historical sign between the Rehoboth Bandstand and the Boardwalk. That sign describes how Rehoboth Beach was founded as a Methodist Church campground. That history, of course, played a part in the naming of CAMP Rehoboth almost 25 years ago, but I still get a kick out of the fact that our town remains a CAMP town—even though our CAMP is perhaps not the same camp our founding fathers and mothers envisioned.

Snapshot 4 is a photo of little Kaden Riley-Spillane on the day of his adoption by his two dads Keith and John Riley-Spillane. Kaden is the fourth child Keith and John have adopted, and while there are many families with same-sex parents who live in or visit Rehoboth Beach, the Riley-Spillanes have been a part of our CAMP family for years. Their mighty efforts to save children in great need, makes them heroes in my eyes, and I was honored to be included on the guest list for Kaden’s adoption in Georgetown. Remember that bumper sticker that inspired the need for CAMP Rehoboth decades ago? There’s one in the CAMP Rehoboth exhibit at the Rehoboth Beach Museum right now. “Keep Rehoboth a Family Town,” it reads. And we all say in unison, as we have for so many years: “And families come in all sizes and shapes and orientations!”

There are other snapshots, of course, the ones I pulled out and many more still sitting in my files. My stories are too long it seems, and most of the rest will have to wait for another day. One last one makes me laugh. It was taken of me at Funland, on the same evening I described earlier. After our Sea Dragon ride, Max convinced me to ride the Gravitron, something I swore I was too old for ten years ago. After staggering off that ride, I noticed the sign warning against riding with back problems or high blood pressure. Now you tell me!

Anyway, the photo was me squatting down if front of the “you must be above this line to ride” Gravitron sign. Yes it makes me laugh, but it also reminds me of how much I have grown as a part of this community we call Rehoboth Beach. My heart is bigger; my soul is bigger. Am I wiser? I’d like to think so, because it takes heart, soul, and mind to deal with the complexities of life in 2014.

A snapshot captures a particular moment in time. This is mine.