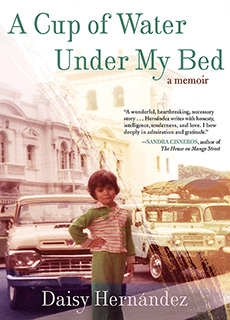 Good question—and once you learned that you can determine the answer by taking things apart, well, nothing was safe. The hidden parts, an object’s guts, were always more complicated and more interesting than what was on the outside.

Isn’t life like that: what you don’t see is sometimes better than what you do? Unraveling her story for examination in A Cup of Water Under My Bed, author Daisy Hernández, lets us find out.

Until she was in kindergarten, Daisy Hernández’s entire world sat in Union City, New Jersey. Her parents, her Cuban father and Colombian mother, spoke only Spanish at home— although Hernández learned a smattering of English here and there; more, once she was sent to Catholic school.

English always held a certain fascination for her but Hernández’s three tías insisted she keep up with her Spanish, which she resented. There were words that didn’t translate easily from English to her parents’ language, so there were things she couldn’t share with her elders. To “make that leap…to leave for another language hurts.”

Perhaps not surprisingly, when she told her father that she wanted to be a writer, he told her she’d “gone crazy.” Still, Hernández pursued her dream, maybe because storytelling was in her blood: her Mami loved sharing tales of her own immigration from Colombia, how she’d heard that money grew on trees but, instead of finding cash on the ground like leaves, she’d had to find a factory job.

Such stories of strength in her mostly-female household gave Hernández a map of life and relationships. She learned about men and whom to marry, disappointing her Mami and tías with her first Colombian boyfriend. American boys, they told her, were better because, “Anything made in America works” but, at seventeen, Hernández was sure she was in love.

That Colombian boy taught her a lot about sex. So did a feminist body-awareness class she took early in her college career, which was where she suddenly understood a long-held feeling that, once articulated, would hurt her mother and cause a rift with her favorite auntie.

“I love kissing boys,” Hernández says, “but a girl. I could kiss a girl.”

My first impression of A Cup of Water Under My Bed led to heavy sighing. It starts with a dismaying tale of invisibility and poverty, which made me think I had another pity-party memoir in my hands.

Ach, I was wrong.

With wit and respectful grace, author Daisy Hernández shares stories of love for family, of strong (despite herself) roots, and of assimilation and claiming who you are without losing who you were. These tales are sprinkled, essay style, with powerful anecdotes of self-discovery that I couldn’t get enough of. I also enjoyed the unwavering tone that Hernández takes, speaking her truth, firmly, no arguments.

That no-nonsense attitude mixes nicely with quiet humor and familial devotion to make this a don’t-miss for memoir fans. And if that’s you, then have A Cup of Water Under My Bed. You’ll like what’s inside.