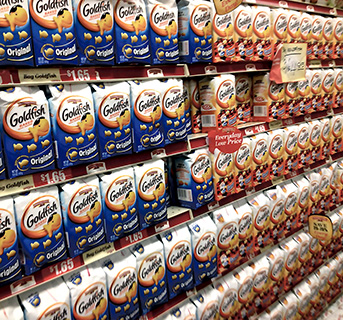 There’s a place I frequent sometimes when the craving gets too strong. I don’t go there often because, frankly, it’s not the kind of establishment one wants to be seen in.

Once in the parking lot, I cut the lights and back into a parking spot with the front of the car facing out so no one can see my license plate and I have a birds-eye view of the storefront. I hope nobody recognizes my car.

I enter the store. It’s devoid of customers, and I breathe a sigh of relief. The man at the register gives me a quick once over and a smirk before going back to working his crossword puzzle. He knows my hunger. He sees it in the eyes of all the patrons who frequent this particular establishment. I quickly head to the right side of the store because I know that’s where the good stuff is.

I scan the racks. The array of product is almost dizzying, something for every predilection. Finally I see it. The green and white package draws me like a moth to a light. Parmesan goldfish crackers! Three bags for five dollars.

There’s always a deal at the Pepperidge Farm store at the Queenstown Outlets where Routes 50 and 301 diverge on Maryland’s Eastern Shore. Not everyone knows about it, tucked as it is out of view near the back of the sprawling retail complex. But those who want and need it, they know.

What is it about the humble goldfish cracker, a simple blend of flour, oil, milk, salt, and flavor that drives such devotion?

Kids, a major market for the cracker, like the image of the smiling fish. Others like the fact that the snack is baked and not fried and available in many flavors. Personally, I like the elegant simplicity of the cracker. You don’t need to pay attention while eating goldfish crackers. Just stick your hand in the bag and funnel them to your mouth. Snack and repeat, snack and repeat. I can easily go through a bag or two at a time during an SEC football game or while catching up on Project Runway.

I also like the fact that at a cocktail party, the goldfish cracker doesn’t drip or crumble. It doesn’t require a fork or a skewer. And, you don’t have to use a napkin or find a discreet place to wipe your fingers, like the side of your pants or someone’s chintz sofa. They’re a classic. Julia Child served them when she entertained.

As I peruse the many different styles and flavors of goldfish crackers, I begin to wonder about the origin of this humble snack, so I whip out my iPhone for a little on-site research.

What I learn is quite interesting. The goldfish cracker, an American icon, was spawned in Switzerland in 1958. It was the brainchild of a Swiss biscuit baker named Oscar J. Kemby. While shaving one morning he was thinking about what he could get his wife for her birthday. She was born under the sign Pisces. That same day he had his factory produce and bake a new cracker, which he named “Goldfischli” meaning “little Goldfish.” It became a hit in Switzerland. The family company is still producing their little goldfish crackers.

Pepperidge Farms started producing Goldfish crackers four years later. The company’s founder, Margaret Rudkin, discovered the little crackers during a trip to Switzerland and brought the concept back to the US. She changed the shape and added cheese to the recipe. The crackers debuted when Pepperidge Farms was in the midst of a transition after being acquired by the Campbell Soup Company in 1961.

Today, more than $435 million worth of goldfish crackers are sold each year. That’s a lot of crackers.

I’m jolted from my cracker musings when a man steps up beside me at the rack. I take a quick glance. He’s younger, cute, and wearing a Baltimore Orioles baseball cap. I look at the big bag of cheddar bacon flavored Goldfish Puffs he’s hefting and fondling.

“I’ve never tried ‘those” I say, nodding to his Puffs.

“They’re the best,” he replies. Mr. Oriole looks at the bag of classic Parmesan goldfish crackers I’m holding and then looks right at me and winks. “You should try ‘em…Lots of flavor…They sort of explode in your mouth.”

He moves down the aisle toward the “flavor-blasted” goldfish crackers in the shiny colorful packages, looking back as if he expects me to follow. Just then a cute blonde girl grabs Mr. Oriole and pulls him away from the crackers and over to the cookies. She wants Milano cookies, I hear her tell him. I grab a bag of cheddar bacon flavored Puffs along with my classic Parmesans and make a quick exit.

Alone in the dark privacy of my car, I slowly open the bag of Puffs. The smell is a bit overwhelming in such close confines. The crackers themselves are a tad oversized and I’m not crazy about the texture. I get goose bumps when I chew. In a few minutes, my hands are covered in yellow flavor dust from all the seasoning. I feel dirty.

Rich Barnett is the author of The Discreet Charms of a Bourgeois Beach Town. More Rich Barnett