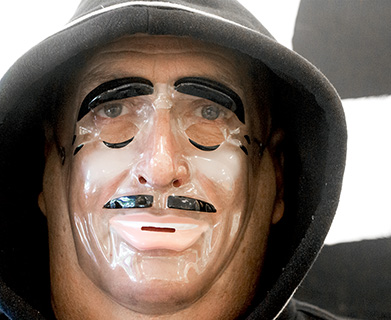 The older I get, the less comfortable I become in stereotyping people. Sure we all fit into loose categories, but despite the saying, one size rarely fits all. That said, however, I think I’m comfortable in saying that a large number of gay people are big fans of Halloween. Come on! We like to dress up, right?

As a young boy, I loved costumes and theatre. Looking back through my dad’s slides from the 50s and 60s, there’s one photo after another of me and my sister and brothers in costume. Sometimes it was Halloween. More often, it was for a theatrical production I’d written and forced them to take part in as my supporting cast. I was not concerned with gender roles either, and would dress them up to meet whatever character needs my script demanded. Thus, we have a lovely photo (except for the scowl on his face) of my younger brother as the heroine of a delightful Christmas drama, sporting a red, pigtailed yarn wig and an adorable apron.

Even more telling of my inherently gay nature: I was only eleven when I asked for my first theatrical make-up kit for Christmas. About the same time, I was cast as the boy Patrick Dennis in a community theatre production of Auntie Mame. The show ran every night for two weeks, and I made sure that every single one of those nights I left a little bit of my eye liner on for school the next day. Oddly, no one in my Alabama elementary school seemed to care—or make fun of me for it.

There is a kind of strength that comes from dressing up. Drag queens are powerful—and sometimes terrifying—creations. Superheroes are always costumed and masked. Halloween gives us permission and courage to be someone, or something, else for a few hours.

Masks have been used throughout history for protection, as a disguise, in ritual, and just for entertainment. Wikipedia tells me that the oldest masks discovered are 9,000 years old, but speculates that the practice of masking is much older even than that. No matter its form, masks have helped us to understand the human experience. Whether through drama or ritual—or even just the imaginative play of Halloween—wearing a mask or “dressing up” pushes us to explore something beyond ourselves.

Gay people have long known what it is like to live behind a mask—we call it the closet. Learning how to reveal who we are as human beings, and when and how to take off the mask is something that each of us has to do as we grow up and come to terms with our sexual orientation. Perhaps that’s why we so appreciate the nuances of a holiday that lets us be whoever we want to be.

From its beginning almost 25 years ago, CAMP Rehoboth has been about creating a world where we do not have to mask who we are—where we are free to live our lives in an open and free environment. Back in the beginning, there were people in our community—gay and straight—who were appalled that Letters from CAMP Rehoboth was out on the street where anyone could see it.

In those early days, we made some decisions that remain crucial to defining us as an organization. One of them was our commitment to exist right in the middle of downtown Rehoboth Beach. A decade later that decision was reaffirmed when the Board of Directors agreed that we would purchase the property on Baltimore Avenue, and raise the money needed to build a Community Center there and not hidden somewhere out of town—even though that would have been the cheaper thing to do.

Visibility goes hand in hand with changing attitudes. Nothing is changed if it is hidden in a closet.

Several folks at our recent Well-Strung concert at the Rehoboth Beach Convention Center commented to me on the amazing community support visible that night. “We are so lucky to live in an open and welcoming community,” I hear people say that all the time. Our community has not developed this way because it was hidden in a closet or behind a mask. When we share our lives openly with our neighbors, the world is transformed. Why? Because the truth is simple: we’re just ordinary people and not the demons our enemies try to make us out to be.

On Halloween we dress up in all matter of evil and scary outfits—demons, witches, zombies and vampires. In real life, opponents of LGBT rights try to cast us in the same, if not quite so colorful, roles. A visit to a conservative website like the Family Research Council quickly provides a list of reasons created for the sole purpose of scapegoating the LGBT community, and making us out to be little more than Halloween monsters.

To those who are against us, maintaining our status as mortal enemies of the family is of upmost importance to the survival of the myth of the dangerous homosexual; once our neighbors get to know us, that myth is debunked.

In the 21st century, religious institutions all over the world are struggling to find new members—especially young people. Why? Because the younger generation knows the truth about gay people; that we make good parents; that we have strong and loving relationships; that we deserve the same rights and benefits as straight people; and most of all, that we too are children of God, created to be just who we are.

That message spreads every time we take off our masks and reveal our true selves to the world around us.

Murray Archibald, CAMP Co-founder and President of the Board of Directors of CAMP Rehoboth, is an artist in Rehoboth Beach. Photos by Murray Archibald; mask models: Rex Rogosch, Akeem Perry, and Dave Hill.