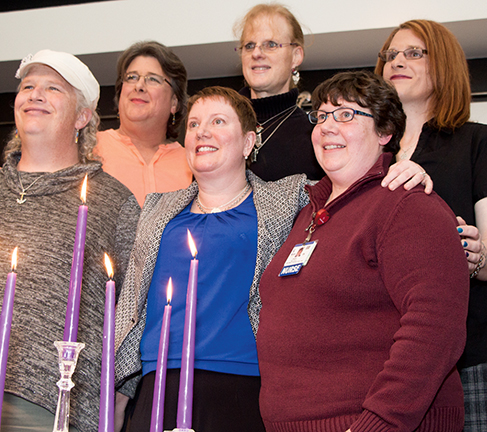 Religious Freedom: To a T

On March 27, CAMP Rehoboth hosted a Transgendered Service of Remembrance and Awareness. The event honored the names of those lost to transphobia, and it focused attention on the ongoing violence and discrimination faced by the transgender community.

The day of the Service was a long one for me, and by the evening, I confess, I thought about just running in, taking a few press photos and leaving. I glad I didn’t. The service moved me, but more than that, it reminded me just how easy it is for all of us—gay and straight—to ignore the T in LGBT. Sometimes it’s done for political reasons, sometimes simply because of a lack of empathy for what being transgender is actually like. Whatever the reason, I’m sure we can all do better at trying to understand those who are different from us—be they L, G, B, T, S, Q, or XYZ (or whatever other names we use to define ourselves).

In recent years, great progress has been made in our fight for LGBT rights, and we are all (at least all who live in progressive states) still a bit giddy with the success of marriage equality. At the same time, in what feels like a backlash to our success and visibility, the dark cloud of “religious freedom” has risen on the horizon—with what also feels like, a decidedly ugly intent aimed at making it possible for businesses to refuse service to LGBT people.

The federal Religious Freedom Restoration Act (RFRA) was passed in 1993 when Bill Clinton was President, and basically required courts: to use strict scrutiny when considering religious liberty cases; to limit religious liberty only for a compelling government interest and in the least restrictive way possible. RFRA is limited to the federal government, so 21 states, now including Indiana, have passed their own.

Since Indiana Governor Mike Pence(R) signed the Indiana RFRA into law in late March, a firestorm of criticism has been aimed at the state because the effort to pass the bill seems to be backed by anti-gay forces.

Like most political situations, the story is more complex than what we read in the headlines or on Facebook. My gut reaction is that it stems from the publicity surrounding stories of photographers and bakers who do not want to do same-sex weddings. Whatever is behind it, however, the whole conversation reminds us that we are far from finished in our struggle for true equality. The tragic events that unfolded in Ferguson, Missouri last year, teach us that even with the enormous progress made in this country during our lifetime, racial bigotry and the frustration and anger that go along with it, still simmer beneath the surface of our outwardly much more politically correct world.

The fight for equality is about changing hearts and minds; it’s about creating a world where everyone is equally respected for who they are. All of us who are LGBT have had to find the courage to face difficult situations in our lives, and I was especially inspired by the participants in our Transgender Service. They seemed far more courageous to me than I’ve ever been. When I started writing this column I was thinking about the T in LGBT, which led me to the phrase “to a T” meaning “exactly; properly; or precisely.” Equality fits all of us “to a T.”

Finding the way we fit into the world around us is an important part of life, and it has always been a part of creating the more positive experience we call CAMP Rehoboth. Advocacy for the LGBT community continues to be the heart of our efforts to carve out a home “with room for all.” Creating a visible, community minded presence in downtown Rehoboth Beach has been vital to our success here at CAMP Rehoboth, and it illustrates our deep conviction that only when we come out—and speak out—about what we believe is right, are we able to change the world around us.

I’m all for religious freedom, but somehow homophobia has become deeply embedded in conservative religious ideology, and it makes no sense to me. This issue of Letters from CAMP Rehoboth comes out on Good Friday—two days before Easter, the most important day in the Christian year. Jesus taught many lessons in the months leading up to the events of Good Friday, but not one of them offers a reason to exclude those who are different from us.

On the day of his death, Jesus said, “Father, forgive them, for they do not know what they are doing.” I think that’s still the case.

That’s my religious freedom. And it fits me “to a T!”

Murray Archibald, CAMP Co-founder and President of the Board of Directors of CAMP Rehoboth, is an artist in Rehoboth Beach. Photos: (top) Participants in the CAMP Rehoboth Service of Remembrance and Awareness; (below) CAMP Chorus members perform during the Service. See CAMPshots for more.