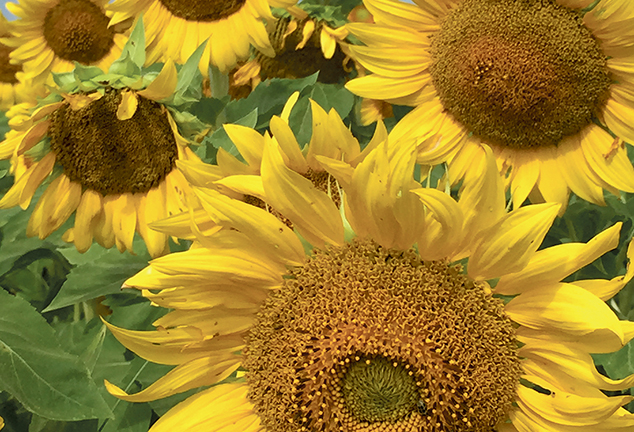 For some reason I’ve been noticing sunflowers this summer: bursts of yellow tucked in among the green monotony of corn and soybean fields of Sussex County; patches of unexpected color between the gray sidewalks and streets in Washington; vases of vivacious blondes in restaurants and bars.

I’m not the only one whose eye has been caught by the humble sunflower. Monet painted them. Van Gogh, you know, was obsessed by them. Paul Gauguin couldn’t stop painting le tournesol; he even imported sunflowers to Tahiti. In Mexico, Frida Kahlo and Diego Rivera grew and painted the flower.

Beat poet Allen Ginsberg wrote “Sunflower Sutra” in the 1950s to lament the destruction of nature and beauty during a time of industry and conformity. He likened the sunflower to hope and creativity.

There does seem to be something special, even spiritual, about these flowers that tilt towards the sun. Helianthus is the Latin name for the flower, which is derived from Helios who was the Greek god of the sun. Helios, you may remember, was drowned by the Titans but then rose and became the sun.

The Incas and Aztecs worshipped the sunflower as a symbol of their sun gods. Native Americans grew them as crops. The mirasol so captivated the imagination of the conquistadors that they carried its seeds back to Spain where they spread quickly throughout Europe. The way it caught on in France you’d believe the French invented them.

The sunflower caught the eye of Russian Czar Peter the Great too. His scientists began cultivating and hybridizing the sunflower for its oil because they couldn’t grow olives. In the late 19th Century the sunflower made its way back to the United States where it slowly grew into a $2.7 billion industry—oil, food crop, confection, and bird food. It really took off in the 1990s when potato chip companies were looking for a substitute for transfats and discovered sunflower oil was perfect for frying their chips.

The sunflower is also inspiring solar energy technologies. How? Engineers have been studying the efficient spiraling pattern of the center of the sunflower—its floret—as a model for how to position mirrors to catch and direct the sun’s rays.

So the next time a sunflower catches your eye, I hope you’ll stop and stare. I hope you’ll see history and creativity and not just a big head flower atop a thick hairy stalk.