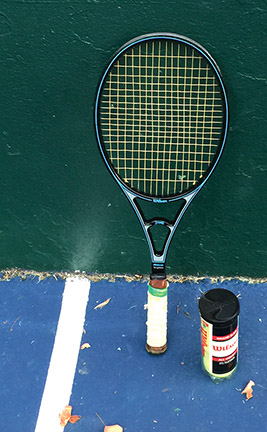 I was digging around in the back of one of my bedroom closets in search of a pair of orange linen pants when all of a sudden out of nowhere my old tennis racquet tumbled from atop a shelf and banged me on the head. After regaining my composure, I dragged it out of the closet because, frankly, I’d forgotten it was there and I felt a little pang of nostalgia. Literally!

Tennis was a big part of my youth, especially during my teens and early twenties. I played in high school and was good enough to earn a varsity letter for my maroon wool and gray leather letterman’s jacket. Not a day went by during the summer when I wasn’t on a tennis court once or twice a day. And when I was off the court I was reading Tennis magazine or watching a match on television.

Those years—the 70s and 80s—were the gilded age of the sport, in my opinion, full of colorful characters like John McEnroe and Billie Jean King and intense rivalries like Bjorn Borg versus Jimmy Connors and Chris Everett versus Martina Navratilova. And, of course, who doesn’t remember the tight shorts the men wore. Boris “Boom Boom” Becker’s oak trunk thighs in particular mesmerized me.

Through tennis, though, I learned some important lessons, such as the importance of always playing to one’s strengths. For me that was a forehand passing shot right down the line. I came to value the notion of keeping calm under pressure, even when dodging rocks tossed by opposing fans. Yep, that happened twice at matches in Floyd and Narrows, Virginia. Tennis also taught me the importance of manners and civility. Compliment a good shot. Shake hands at the net upon concluding a match. Share a gin and tonic afterwards.

All these memories and more came flooding back to me as I unzipped the racquet’s dusty cover. To my surprise I found its strings still taut even after almost thirty years of abandonment.

Maybe its sudden reappearance wasn’t coincidental? Perhaps it was a sign, I thought, as I took a couple of practice swings with the old Wilson Sting midsize. Maybe I ought to get back on the tennis court and see if I still had any game left in me. You know where this is going, don’t you?
My first challenge was to figure out where to buy a can of tennis balls. It took me a few days to find some. I was shocked how inexpensive they were—three balls for $2.50. I swear they cost more back in the 80s. Then of course I had to order a white UVA tennis championship t-shirt so I’d feel properly attired when I stepped onto the court, except that I didn’t actually step onto the court. Not at first. I stepped up to the hitting wall beside a couple of tennis courts in Georgetown near my apartment.

I was a little nervous until I snapped back the pop tab to open the can of tennis balls and once again heard the familiar pshhhhh sound. I held the can to my nose and took a long drawn out sniff. Yeah buddy. There’s nothing like a whiff of new tennis ball aroma to loosen you up for some long stroking.

I started off with some forehands and I was surprised how quickly I found my stroke. When I found my rhythm I gradually moved over to some backhands. It was going better than I’d expected. Of course, I was sweating like a pig, but that was to be expected on a hot August evening.

Feeling pretty impressed with myself, I decide to venture onto a court to practice my serve. I have to admit, the first few were pathetic. Swing and a miss. Balls were flying left and right off my racquet. Nothing was coming close to getting over the net. Realized my toss was off, so I channeled back to some lessons. Spent a few minutes tossing the ball up, following it with my eyes and catching it. Once I could follow it, I began tossing and hitting. Gradually I began hitting a nice soft serve over the net with some consistency. Now we’re talking.

Started feeling a bit more comfortable on the court. Even picked up my ball by pressing it against my foot and lifting it up. I remember how important that was to learn as a kid.

That’s about the time I noticed the fella on the next court. Every time he reached up to serve his t-shirt rode up revealing his stomach. Did I ever look like that? Well, the next thing I know I’m stepping on one of my tennis balls, losing my balance. In an attempt not to go down, I hear a pop and feel a tear in my calf and I take a tumble on the court.

Of course, I’m mortified, more so when X gives me a hand and helps me up. What he must be thinking. Some old boy out on the court.
Hurt like hell. Hobbled over to a bench and tried to stretch out my calf. Wasn’t happening. Brought out my iPhone and learned that what had just happened is very common among “older” tennis players. It’s called calf muscle strain or “tennis leg.”

And I had to limp the five blocks home. And wouldn’t you know, that’s when the skies opened up, one of those evening thunder storms.
Put the racquet back in the closet. Turned on Project Runway, and ordered some Chinese food. Some things are better left alone.