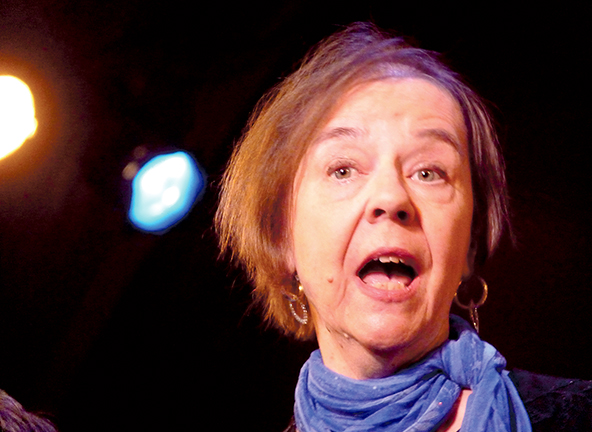 Gladys Ward: This Song’s for You

Gladys was raised by her aunt in a rough neighborhood in Newark, NJ. Her sister was raised by their mother in a nearby but “better” neighborhood. Gladys always wondered why “I wasn’t good enough…” to be raised by her mom. This might attribute to Gladys’ lifetime striving to be better than the rest of the herd. Gladys credits seventeen years of Catholic education to her ability to be very employable. This coupled with a finely honed wish to succeed resulted in constant, challenging employment.

Gladys went to work as a secretary at Planned Parenthood. She advanced to Assistant Director and opened the first Abortion Clinic. When asked how she went from good Catholic schoolgirl to Director of this particular clinic, she explained, “I listened to people.” After ten years, she moved to a similar position at the Red Cross, all the while taking courses at night for her degree.

Economic fears and a faltering marriage propelled Gladys to a job as a secretary in the Physics Department of Ithaca College, the largest private college in New York. In typical Gladys fashion, she advanced repeatedly until she was appointed the Risk Management Director of the entire college. Despite early fears that “she wasn’t good enough,” Gladys built her career, step by step, each step capitalizing on the step before. Skill upon skill and always “listening to people.”

When asked what inspires her, Gladys doesn’t have to think. “I have thought about this over the years. I have decided that Churches, and what they do for people, inspire me regularly.” She denies having been inspired by religious principals but by the people of the churches who give freely. If there is a need, one or more community churches will step up.

Gladys adult life was ruptured by her failed marriage. It was unexpected and left her with severe self-doubt. It forced her to re-think her beliefs, values, and goals. But, in retrospect, it led Gladys to re-evaluate her thinking and her inner self. She came to believe that you have to work for yourself first in order to be able to share with another.

As a child her extended family had gone to the Jersey Shore for several weeks each summer. Gladys found that sand and saltwater captivated her and she pledged to live near the ocean. As she approached retirement, she and her partner Charles began to explore the mid-Atlantic coast for a home. In her habitual pattern, Gladys researched the choices in economic, social, and geographic terms. They settled on a low-maintenance manufactured home on its own land, in a diverse community, in a bustling neighborhood, thirty-minutes from the ocean. Gladys did not intend to be a visitor but to incorporate her new home into her life.

A volunteer post at the “Epworth Theatre” resulted in a connection to Clear Space. It was suggested to her that she join the newly created chorus at CAMP Rehoboth. “Why would they want me?” she asked, “I’m not gay.” Doug Yetter and Fay Jacobs parried, “So.” Needless to say, Gladys joined enthusiastically, happily accepting any number of assignments. Gladys marvels over the mission and enterprise of CAMP Rehoboth. Her eyes widen as she describes the open, accepting, diverse community which has embraced so many.

When Gladys is asked to identify that which has inspired her over the years, she unhesitantly describes the unquestioningly phenomenon of people springing to help others in need. She emphasizes that nowhere is this phenomenon more obvious than in the CAMP community. When any need is expressed, an army mobilizes to address it.

Asked to identify disappointment, she sadly describes the failure of Safe Haven. She details the community efforts in developing the shelter and the devastating collapse of the effort. Characteristically, she points no fingers, discredits no participants. She focuses on the loss to the animals.

Gladys defines her politics as “progressive.” When asked if this was a family-based or acquired condition, she enumerates the progression of her beliefs. She credits her relationships with Jesuit Priests as the most influential in her developing progressive thinking. Jesuit Priests? How? She laughingly relates, “They taught me to think.”

Despite her trim appearance, Gladys chronicles her love of eating out. She identifies restaurants in terms of location, costs, community commitment, diversity of customers and staff, and business model. She emphasizes that she and her partner belong to the Long Neck community and contributing to the economic health of its businesses is a responsibility. She enthusiastically details a long list of services and businesses in the region and describes the neighborhood connections.

When asked what she wanted her legacy to be, she thought for a few minutes.

“I want to be remembered as someone who lived in the moment and who listened to  people.”

I for one will not forget her.