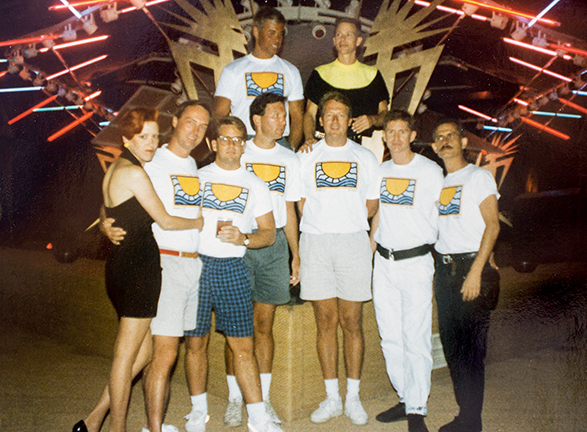 Some of the Hosts at the second Sundance in 1989 at the Strand.

Notes On The Super Magic Rainbow

This Labor Day weekend we will celebrate the 28th Sundance in Rehoboth Beach. That’s a long time to host a party. I’d like to say that I clearly remember each one, and on some level I’m sure I do—certainly I could assemble a list all the themes—but the truth is the memories have long since melted into one gigantic rainbow watercolor.

Sundance has survived all this time for the simple reason that it receives tremendous support from members of the Rehoboth Beach community. To produce an event the size of Sundance requires commitment from many people and in a variety of ways. Volunteers give hundreds of hours in time and creativity, auction donors give items for the live and silent auction, and our Hosts, Supporters, and Sponsors provide the funding to make it all happen. Here’s a little about each:

A Host of Hosts

From its start, Sundance has been paid for by its Hosts. Back in 1988, a small group of friends agreed to host “A Sun Dance,” as it was called that first year, to raise funds for AIDS organizations. Over the next few years, that Host list expanded and the event officially became known as Sundance. By the mid-1990s, as Sundance continued to grow, the definition of Host was expanded to include Sponsors and Supporters. Now there are hundreds of Sundance Sponsors, Supporters, and Hosts, and as it was in the beginning, they still make Sundance possible.

In recent decades, we’ve taken the enduring nature of Sundance for granted, but that wasn’t always the case. We didn’t have a hard time convincing the original hosts to continue producing the event for a second year, but by the third it was becoming something more than just a party, and its success began to require a deeper and deeper commitment to make it happen. By 1992, Steve and I were faced with a choice: let Sundance live or let it die. Once the decision to continue was made, we were determined to see it through. That year, we looked at each other, picked up some clip boards and Host forms and started knocking on doors along Baltimore Avenue.

My lesson from this mirrored what was happening at CAMP Rehoboth at the time, and I became very conscious of the fact that creating something is the fun part; caring for it day after day, year after year requires a different kind of commitment.

I suppose there are fundraisers who really enjoy their work; most of us do not especially enjoy asking for money. We do it because it is a necessary part of survival for non-profit organizations. The income in the CAMP Rehoboth budget comes from a variety of programs and events—which is good because it keeps us from being too dependent on any single source. There are several items that provide larger chunks of income: one is the advertising from Letters from CAMP Rehoboth, the second is our Membership Program, and the third is Sundance. Which is why at this time of year, Steve and I still spend a lot of time asking folks to become Hosts/Sponsors of Sundance. We may not knock on doors anymore, but between email, Facebook, our phones, and our volunteers we get the job done.

The next two weeks in July are crunch time for us in our efforts to sign up Hosts, Supporters, and Sponsors for Sundance. In order for us to include names on our Sundance posters and invitations, we are asking everyone to sign up by July 25. There are several ways to sign up: online at camprehoboth.com; calling or visiting the CAMP Rehoboth Community Center office; or, for those who received a form in the mail, by returning it as soon as possible.

A Time to Give

Time is as valuable as money when it comes to Sundance, and we could not make it happen without the efforts of our huge army of Sundance volunteers. From the Sundance Team Captain’s meetings in mid-winter to the tortuous final breakdown on the Monday after Sundance, our volunteers know the meaning of “Labor Day” firsthand. Sundance has always been a labor of love, and sure, parts of it are physically challenging, but it’s also fun—and I’ve been amazed over the years by the number of volunteers who take vacation time to come to Rehoboth to volunteer for Sundance week at the Convention Center.

Sundance is always the Saturday and Sunday of Labor Day weekend, and we begin moving into the Convention Center the Monday before that. That week is filled with Sundance teams writing, sewing, building, decorating, creating auction graphics, loading in lights and sound, prepping food and bar, and setting up display areas for the auction. In recent years, there always comes a moment when the huge truss that fills the inside of the Convention Center is raised, fully loaded with lights and decorations, into its final position. In that moment all the volunteers and stage crews assemble to watch and cheer. It is a great behind-the-scenes moment for Sundance volunteers.

The week of Sundance is not the only time we need Sundance volunteers, and long before we move into the Convention Center volunteers are needed for mailings, Host and Sponsor solicitation, auction calling and pickup, ticket sales, and office help.

To sign up as a Sundance 2015 volunteer call or email Monica Parr at CAMP Rehoboth.

The Sundance Auction was not a part of the original Sundance; the first small auction component was added to the second Sundance in 1989. Since that time the auction has grown to encompass close to 500 items. Most of the items are auctioned in the silent auction; the 20 or so larger and most exciting items are featured in the live auction.

We are still assembling items for this year’s auction, but already we know we’re going to have some amazing travel opportunities. The most spectacular is a Uniworld European River Boat Cruise from Accent on Travel with a variety of available dates and itineraries—and it’s all inclusive, so except for air fare everything from drinks to excursions are part of the package. Olivia is always a big supporter of Sundance (and Women’s FEST) and this year they’re donating an awesome Caribbean Escape Cruise (January 30-February 6, 2016).

Starting August 1, Sundance Auction teams will begin in earnest to solicit items for the auction. We are looking for new furniture, jewelry, clothing and accessories; travel and accommodations; dinner for four and other fine dining experiences; professional services; appliances and tools. We will not auction “white elephant” items, so please limit used donations to genuine antiques and fine art in perfect condition.

Anyone with items to be picked up should call the CAMP Rehoboth office.

As a Host, Supporter, or Sponsor; as a volunteer; or as an auction donor, please sign up today. Sundance 2015 is going to be another Super Magic Night!

Sundance 2015: The Super Magic Rainbow Glitter Ball is a two night event at the Rehoboth Beach Convention Center. The Sundance Auction is Saturday, September 5, from 7-10 p.m., and it includes a cocktail buffet (with a yummy BBQ theme), an open bar, the silent auction, and the live auction featuring Sundance auctioneer Lorne Crawford and music by Steve Strasser. Sunday, September 6 is the dance from 8 p.m.-2 a.m., featuring the internationally known DJ/Remixer Joe Gauthreaux and lights by Paul Turner. Tickets for the events are $80 for both or $45 per night, and are available on the CAMP Rehoboth website.