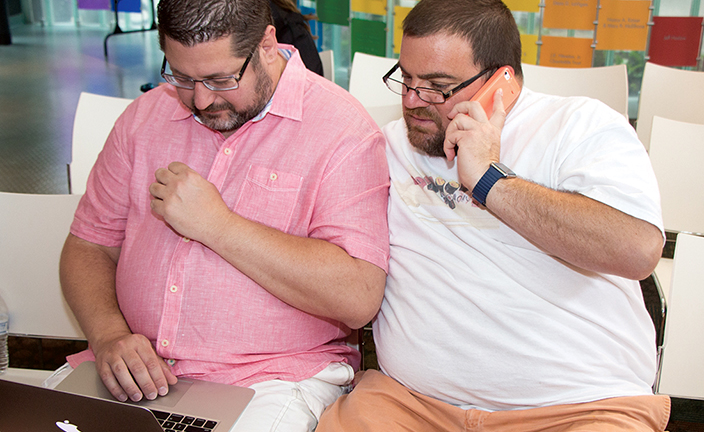 Mark Purpura and John Lucas at the CAMP Rehoboth Community Center on July 26.

Not Just Another Friday!

Well, I had written my column and sent it to my editor, talking about the upcoming marriage equality opinion from the Supreme Court. I was hopeful but not certain. And I expected to add an addendum at press time, with whatever the news turned out to be.

I just reread my column, ripped it up and decided to write a new one: no hedging, no hopes, no guarded optimism. WE WON! The Supremes, at least five of them, handed us a victory.

I wish you could all have been at CAMP for the announcement. We stood around Mark Purpura’s computer—you know, or know of Mark. He wrote the marvelous marriage equality bill for the state of Delaware. He stared at his laptop, said. “Here it is,” and started to read aloud, then bingo, he stopped in his tracks, looked up and said, quietly, “We won.” For a minute there was no sound in the room. We just stared at Mark and his computer in stunned silence. Then came the whoops, high fives, cheers, and more. “So somebody get the champagne,” said a lone voice. It was, after all, 10:05 a.m. Why not!

Frankly, what happened next was kind of weird. Steve and Murray wandered around between the front office and the Community Center room, we all stared at our cell phones, with more info coming in from posts. There was no radio or TV at CAMP since the streaming signal was weak. In fact, it was oddly quiet for such a joyous moment. It was as if time were suspended and, after gallons of ink championing marriage equality, hours of testimony, years of marches, decades of disappointments, and discrimination, we were just stunned into silence by this enormous victory.

“I can’t believe it!” somebody uttered.

“I never thought I’d see this in my lifetime.”

“For pity’s sake somebody put some disco music on!” I said.

And we did. And people started filtering in. We posed for pictures on the CAMP porch, amid balloons and bunting, and thumbs up and smiles a mile wide. Cars passed by and honked, gay folks swarmed the street, straight folks cheered us and blew kisses. It was a true holy crap moment.

Finally we got a TV signal and watched President Obama’s moving statement. Plans were made for later that afternoon or happy hour or weekend celebrations.
As for me, I sat down a minute and thought about this.

My birthday is three days away. What a birthday present. And although I will be older than dirt on this coming Monday, it amazes me that we are at this juncture at all in my lifetime.

For half my current years it seemed an outright joke and impossibility. I was 33 (and a half) and about to meet my future wife, although there was no hope of using the word wife in any context except for a laugh. We were still sneaking into dark gay bars in terrible neighborhoods and making up fake boyfriends for work colleagues (Okay, I never really did that, but I wasn’t honest, either).

At three quarters of my current lifetime, age 50 or so, we were out and proud and marching and being activists, but marriage equality wasn’t even on the table. It still seemed the impossible dream, as simple anti-discrimination bills were failing to gain headway. One year later, by the way, I moved to Rehoboth full time, and was able to enjoy the freedom of our gay friendly bubble here on the coast. But we still had absolutely no legal protections or hospital visitation rights, much less any glimmer of potential marriage equality.

As the issue started to snowball in the last (if you are keeping math count on my age) 17 years, Delaware provided hard-fought anti-discrimination protection, then the antiseptic-sounding civil union law, then, gloriously, the full enchilada of marriage equality. Delaware? We were thrilled and pretty darn surprised. The hard work by our Governor Jack Markell, local representative, now House Speaker Pete Schwartzkopf, attorneys Mark Purpura and Lisa Goodman of Equality Delaware and so many more, made the seemingly impossible a reality.

And now, here we are. It’s fabulous news, it makes a huge difference in many lives and seems the ultimate victory for my 30 years of wishing, hoping, marching, writing, and talking. It’s fantastic. But we all need to remember that four Supreme Court judges and an awful lot of Americans think this was the wrong decision. Its implementation may not be smooth. Will we need National Guard troops to ensure marriages can take place in certain states? Will there be violence? What about repercussions? I hope not. But we must be prepared to face whatever comes our way as we see the new law of the land implemented. There’s still work to do.

But we can leave that for later! Today, tonight, this last Pride weekend of the month is time to celebrate. I’m heading directly to my favorite watering hold to lift a toast to the fabulous four: Justice Ruth Bader Ginsburg, Justice Anthony M. Kennedy, Justice Sonia Sotomayor, Justice Stephen G. Breyer, and Justice Elena Kagan. You are my heroes.

Happy birthday to me and my wife Bonnie and all of our friends and colleagues. Woo-Hoo!