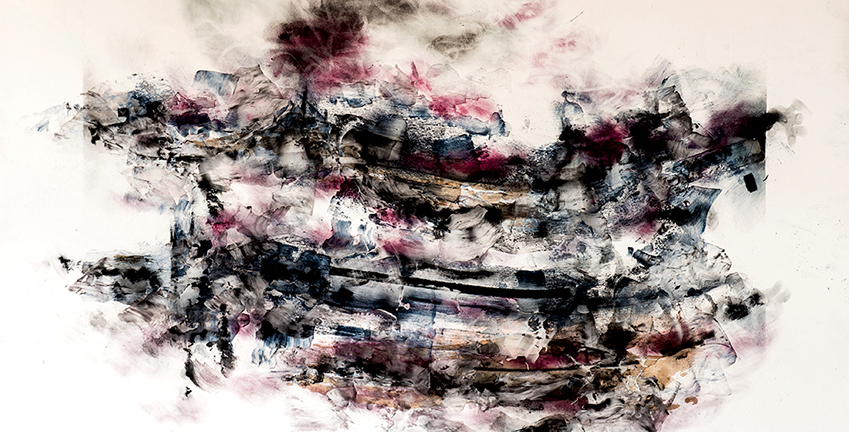 It’s been a long time since Kindergarten show and tell for all of us. But the Philip Morton Gallery on Baltimore Avenue will host a new summer exhibit called Show and Tell by local artist Lee Wayne Mills, July 9-23.

It’s a great opportunity for the prolific artist, long a Rehoboth favorite, to show us some of his more unusual works and tell us a little bit about his inspiration. There will be an opening reception on Friday night July 10, 6-8:30 p.m. The exhibit represents new and older works by the artist from his private collection—never before exhibited. This is a unique display, almost 40 years in the making.

The show will include abstract works on paper and canvas in a broad range of media—pastel, ink, acrylic, molding paste, recycled elements, and cloth collage.

Mills, well known regionally for his abstract expressionism, shows regularly here in Rehoboth at Gallery 50, and has had his works on display at Peninsula Gallery in Lewes, at Bishop’s Stock Gallery in Snow Hill, MD, the Academy Art Museum in Easton, and with his colleagues in The Artists Exchange at the Biggs Museum of American Art in Dover, DE.

Previous to his relocation to Rehoboth Beach, Mills’ work was exhibited in Washington, D.C., Baltimore, MD, Province-town, MA, and many other galleries along the east coast.

I recently had a chance to ask the artist some questions and delve a little bit into his very collectible work.

FJ: How is this exhibit different from the many others you have had in Rehoboth, Maryland, Provincetown and so many other wonderful places?

LM: The big difference is that the works in the show have been hanging in my own home or kept in my flat files—with most having never been shown or only shown a very long time ago.

FJ: What time span does this retrospective cover and do you have certain identifiable periods that produced specific kinds of works?

LM: A few works are from the late 1970s and the others on up through the years—including a very new piece. I think people will see connections among the works, though not all. I think the works show a lineage of “how” I put together the elements of my collages or assemblages—but their “moods” may vary widely. It’s not really a stylistic difference; it has to do more with subject matter and my own attitude at the time.

FJ: What is your favorite piece in the show and why?

LM: Favorites are a tricky business. At some point in their creation, all works are a favorite—but over time only a few resonate to a deeper level. I think of them as “seed pieces”— works that contain elements and ideas I will/can/have used over and over again. There are several in this exhibit, but if I had to choose one it would be “The River Clock”—all from elements gathered at the mouth of the Susquehanna River and put together. They are time in its essential form and they represent time in a deeply poetic way.

FJ: As a writer as well as a visual artist, do you have a certain way you go about naming your pieces? They always seem to give the gallery-goer an extra glimpse into your world.

LM: Names and titles are a difficult activity. I want the title to convey something of my own experience but be open enough that the viewer may bring something to the process as well. Sometimes I get it right; but there have been times when the response clearly indicates I failed in the naming. While my work remains essentially abstract, it is about: time—and weather—and landscape—and a sense of place but it does not directly depict those things. I really do not like “Untitled” as a title; my work is not that cold or removed.

FJ: What is your oldest piece in the exhibit and can you tell us a bit about the circumstances of creating the painting? How about the newest?

LM: The oldest piece is an acrylic stained canvas from the late 1970s which clearly shows my interest in beaches, sand, horizons, oceans and bays. My newest, “Red River Valley,” a large mixed-media collage on paper, is also landscape oriented and continues in that vein—though about rivers, floods, lost horizons and vanishing points of reference.

FJ: Are there paintings in your show that tie in with some of your work as a poet?

LM: Yes, there are several. “How Comes the River” is a diptych of mixed media on unprimed canvas. Its full title is a haiku:

How comes the river
into last light, deeper pools
and darker shadow.

FJ: Who is your own favorite contemporary artist? How has that artist influenced your work?

LM: The inspiration of other artists are my biggest influences. I know some art history—and that is a great soup that nourishes continually. Among the most influential to me directly are the Abstract Expressionists—principally Joan Mitchell, Lee Krasner, and Robert Motherwell (all sadly gone). Among the living, I would give a shout out to Louise Fishman and Julie Mehretu.

FJ: What’s the most fun you’ve had with an art project?

LM: Funny you should ask! I would have to answer the Rehoboth Dolphin Project, under your direction. All my artist friends adored that project. A great time had by all!

FJ: That was fun! Maybe it’s time the Art League cooked up something else like that!