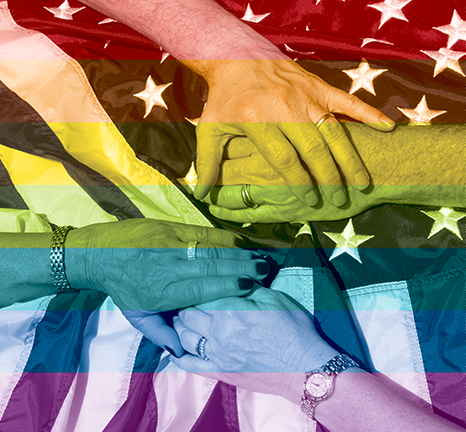 I’m writing on the morning of June 26, only a little more than an hour after the Supreme Court ruled that the Constitution guarantees a right to same sex marriage. Here at CAMP Rehoboth, there is tremendous excitement in the air—with folks celebrating all over the CAMPus. Every few minutes, loud cheers ring out from the front porch; rainbow balloons are everywhere. News crews are lining up to get soundbites for the evening news.

It was on this date two years ago, that the Supreme Court set the stage for this to happen when it declared that portions of the Defense of Marriage Act were unconstitutional. Along with today’s ruling (and that of Laurence v. Texas which struck down all sodomy laws), June 26 will now forever be enshrined as a key date in LGBT history.

This long awaited Supreme Court decision comes at an interesting moment in time. Even as President Obama spoke eloquently in the White House Rose Garden about same-sex marriage, he was preparing to speak at the funeral of South Carolina State Senator Clementa Pinckney, pastor of Charleston’s “Mother” Emanuel AME congregation, slain by racist hatred within the walls of his own beloved church.

Though the people of Charleston are in mourning, the spirit of love and forgiveness coming from that church and that community is inspiring. They remind me that changing the law is one thing; changing hearts and minds is an ongoing struggle. Racial prejudice was not wiped out by the successes of the civil rights era, nor will those who are opposed to same sex marriage simply vanish because the law has changed.

Today we celebrate. Tomorrow we go back to “creating a more positive” world, as has always been the CAMP Rehoboth mission.

Last year, the British film Pride, written by Stephen Beresford and directed by Matthew Warchus won the Queer Palm award at the 2014 Cannes Film Festival. The film was nominated for a Golden Globe (Best Picture) and a BAFTA (Best British Film) award. Pride is based on the true story of a group called Lesbians and Gays Support the Miners (LGSM). LGSM was created to collect money for the people suffering because of the 1984 British miners’ strike. Because the Mineworkers’ Union was concerned about being associated with a gay and lesbian group, the members of LGSM take their donations directly to a small mining community in Wales, and the alliance that follows is both strange and wonderful—and successful.

Pride ends with busloads of miners arriving to march in the 1985 London Gay Pride Parade. Because of the relationship created by LGSM and the miners, support from the National Union of Mineworkers was instrumental in creating support for gay rights within the British Labour Party.

In his opinion for the court, Justice Kennedy wrote: “The history of marriage is one of both continuity and change. That institution—even as confined to opposite-sex relations—has evolved over time.” He goes on to describe how marriage has gone from arranged contracts for political and economic reasons to voluntary contracts, and how the changing role of women has altered the nature of marriage.

The High Court’s ruling on marriage comes just days before the Fourth of July—the day when we celebrate the signing of the Declaration of Independence. “We hold these truths to be self-evident, that all men are created equal, that they are endowed by their Creator with certain unalienable Rights, that among these are Life, Liberty and the pursuit of Happiness.”

Like marriage and the entire history of the LGBT movement—and all of life for that matter—our country’s quest for equality has always been in a state of evolution. Sometimes we make progress and sometimes we don’t, but the very fact that we as a nation strive to live up to those words has, since the day they were signed, defined who we are as a nation. This Fourth of July, LGBT people all across America will celebrate equality with a renewed vigor and the sure knowledge that we are one giant step closer to our own “unalienable rights.”

Of course the work is not over—it never will be!

Like the friendship and support that grew out of the relationship between LGSM and the British miners, CAMP Rehoboth and LGBT organizations across the country continue to provide outreach to our local communities. Every time we work with our neighbors, with the police, with city government, and with other organizations, the march toward equality continues.

This day is a high point—a mountaintop from which to view the long road we have traveled. It gives us the courage, the strength, and the hope to face whatever valleys we encounter in the future.