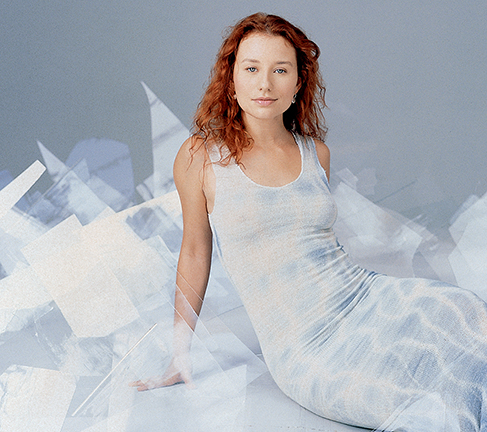 My dear friend, then boyfriend, must have been dumbfounded when I—a gay man—uttered these words that, in retrospect, are among the most naive of my life.
I rolled my eyes at him as we cruised the interstate, dismissively contorted my face, and swapped the Tori CD out for something else—something that would accord my young, inexperienced ears instant gratification.

Following a fortunate musical maturation in the years after, I was drawn back to that car ride and the twinkling magic of the Bösendorfer. Over time, I became completely swept up in the mesmeric awe of Tori Amos.

Now 32, I’ve curiously wandered through the pianist’s magical musical chasm—I’ve even enjoyed interviewing her many times—and with every fresh project or recently discovered rarity, I’m the one telling that same friend (who’s lately lost touch with Tori) that he is the one missing out.

So, friend, the time has come yet again. Little Earthquakes and Under the Pink have both been newly remastered and flexed beyond the back-to-back albums’ staples. (You know: “Pretty Good Year,” “Baker Baker,” “Crucify” and “Precious Things,” to name a few.) Both double-disc releases glean rarities performed in studio and on stage during each LP’s subsequent era.

And no, these reissues aren’t afterthoughts, especially for casual Tori followers.

While record labels are infamous for putting out rehashed, “remastered” releases with nil new material to offer, fans can rest assured that Atlantic is mindful of the fact that a legacy artist like Amos deserves legacy treatment. Perhaps the biggest sell for aficionados: The audio gets a noticeable upgrade, making subtle improvements to the original cuts while still preserving their essence. Plus: Eighteen additional songs on Little Earthquakes! Fifteen on Under the Pink!

Released during the chanteuse’s golden age, these seminal works were critical to the singer-songwriter’s repertoire, setting the stage for over 30 years of soul-baring artistic expression.

Looking back over those three prolific decades, her debut, Little Earthquakes, endures as her masterwork. To this day, it’s a lifeline to legions of self-actualizing queers who revel in the earnest emotions the then-29-year-old Tori confronted. “Me and a Gun” harrowingly detailed her own personal rape-at-knifepoint nightmare. “Crucify” took the piss out of religion. In all her commanding glory and groundbreaking artistry, Amos was vulnerable and translucent, skewering childhood ideals and wailing her way out of social exile.

And she took you with her.

The journey would lead to another feelings-fueled outpouring two years later. As she slayed more demons and firmly established herself as an emblem of empowerment, Under the Pink once again expressed a deeply resonant facet of the human condition: the need to love and be loved.

No one knows these songs better than Amos, of course. She revisits them within the Under the Pink liner notes on the Deluxe Edition, explaining their emergence in her own words and offering longtime fans extra insight, a boon for Tori-philes already versed in every album cut and every B-side.

Among the B-sides on these packages: "Smells like Teen Spirit," where Amos turns Nirvana’s grunge staple into an evocative whirl of piano-guided emotions, and the dizzying, delicate “Here, in My Head.” The latter, included on Under the Pink, is a live version from a 1994 performance in Bristol, and the track—clean and crisp—sounds particularly divine. Included along with stage versions of “Past the Mission” and “The Waitress” is “Winter,” performed the same year in Manchester. Like a whisper in time, it’s just as you remember it: gripping, intimate, rich.

“When you gonna make up your mind / When you gonna love you as much as I do.” Simple yet profound, those words, spoken to her by her father, would find a hideaway in my heart despite my resistance to them at such a defiantly young age. Looking back, it’s hard to imagine I resisted them at all.

It’s even harder to imagine my life without the truth-baring salvation I’ve come to know as Tori Amos.