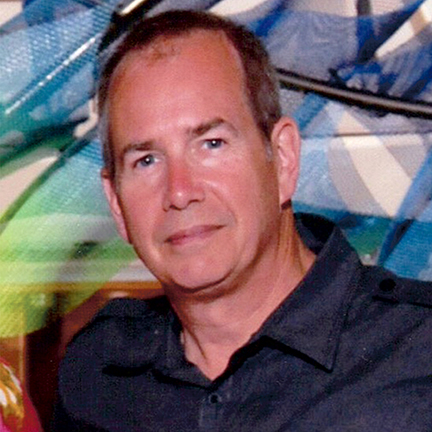 It’s hard to separate Rick Kirchoff from the Triple Crown. He was born on Long Island close to Belmont Park where the final race of the Triple Crown is run. Rick’s dad was an engineer for IBM specializing in typewriters. His dad and mother were native Long Islanders and encouraged independence and survival-style behaviors from their kids. When Rick was three, the family moved to Lexington, KY., a three hour drive from the Run for the Roses. Of course, IBM was the draw not the racetrack. Rick only returned to New York to visit family and considers himself a Kentucky native. His dad was in product design at IBM and Rick recounts a great childhood in a place where he was known, accepted, and challenged.

He went to local schools and the University of Kentucky where he majored in Political Science. Politics intrigued him, but he reports that he was scarcely driven toward it. He planned to go to law school but instead started graduate school in Public Administration. A neighbor, knowing his interests, encouraged him to work for another neighbor, Larry Hopkins who was running for Kentucky’s Sixth Congressional District. Never before had he known such a happy place; he is still amazed at what fun he and the other volunteers had promoting their candidate. He was hired as the campaign youth coordinator charged with getting out the youth vote. He began travelling around 16 counties, visiting over ten colleges and universities selling the candidate to the young voters.

After the election in 1979, Rick represented the Congressman at meetings in the district five days a week. Hopkins came home each weekend, and Rick accompanied him throughout the district. He loved the travel and the job and believed in the mission. One of his myriad jobs was to occasionally baby sit Hopkins’ son, Josh, who as an adult achieved fame as an actor in television and movies and a musician. The Congressman offered Rick a job in his Washington, DC, office in 1982 doing legislative research and answering correspondence. Rick remembers with fondness a gigantic inkjet printer that churned out letters and documents each day. Rick studied the issues, documented them for the congressman, and researched every possible solution, but was pulled up short by the realization that government is an endless succession of back room deals. Little of substance ever got on the agenda.

Hopkins served on the Agriculture Committee which oversaw the subsidies given to tobacco farmers. Rick attended hearings where congress was pitted against the farmers over the subsidies and the sale of government tobacco stock. One of his jobs was to write nasty questions for use by the committee members. The smokeless tobacco industry, so impressed with the questions, offered him a job.

Rick, despite a despotic boss and constant travel to all the state capitals, thrived. He bought a small house in Arlington and settled into his career. He and his partner, Steve Young,  began visiting Dewey and Rehoboth Beach. In 1992, seeking more challenge, he left his job with “no prospects.” He answered an ad in the Washington Post and shortly was hired by the National Association of State Departments of Agriculture where he stayed for 16 years.

Five years into this job which of course was unceasing travel, Rick and Steve bought a refurbished garage on Stockley Street and remodeled it to perfection. But they wanted a pool. This led them to RBYCC and a house ready for complete renovation after a plague of frozen and flooding pipes. And naturally, they restored it to perfection. Rick laughs at the financial and labor travails of this remodeling episode. He describes the relief when they could finally conventionally finance this project. Settled at last. Asked who has inspired him, he names his partner because of his business sense and work ethic.

But Rick, still commuting on weekends was burning out at his job. He and his partner debated moving to the beach and opening a retail business. And then, the Canalside Inn, reopened after a major overhaul, came up for sale. Rick infers that only “creative” could describe their efforts to purchase the Inn. House sold. Financing arranged. In March, 2004 the Inn was theirs. Rick worked at NASDA during the week while Steve ran the Inn. Business grew rapidly, increasing every year. By 2006, Rick was here full time. He acknowledges that the Inn requires both of them to harness its needs and growth.

When asked what he sees as his legacy, he shakes his head sadly. As an animal lover and business professional, he had volunteered to try to save the crashing Safe Haven No Kill Shelter. He says that he couldn’t make it happen, but he isn’t finished yet. He wants to be remembered for his efforts to protect animals.