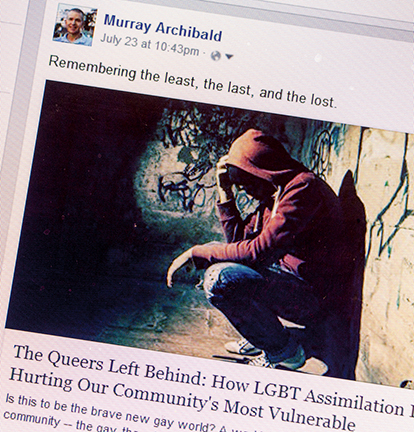 The Least, the Last, and the Lost

I recently shared two seemingly unrelated items on my Facebook page. After mulling them over for a few days, I came to the conclusion that they were not unrelated at all.

The first, a Huffington Post article written by Colin Walmsley, began by contrasted two parties the weekend of New York City’s Gay Pride Parade. The bigger of the two parties, the famous Dance on the Pier featured Ariana Grande and was, he writes:  “Complete with laser lights, multiple jumbotrons, fireworks and a legion of half-naked go-go dancers…[and] was a brazen testament to the newfound trendiness of urban gaydom. Admission started at $80, but that didn’t stop 10,000 enthusiastic fans from snatching up tickets to what organizers billed as one of the world’s top-tier LGBT events.”

The other party the article described was in sight of the first one and took place at the Christopher Street Pier. “Here,” he writes, “a motley crowd of queer homeless youths—who definitely could not afford admission to the Dance on the Pier—decided to throw an impromptu party of their own. With the bass from the Ariana Grande concert pulsing in the background, the youths—male, female, cisgender, transgender, gay, lesbian, bisexual, black and Latino—drank, smoked, sang, vogued and played cards under the dim light of the street lamps.”

The writer, in the remainder of his article, suggests that in the last decade, the LGBT community, in our efforts to achieve acceptance and success in the marriage equality fight, has, in his words, “dismantled the hypersexual, flamboyant gay stereotype and replaced it with a more wholesome image that mainstream America found more palatable.”

The second of my two recent Facebook postings was a video of Pastor Dewey Smith preaching—and I mean preachin’ as only a gifted black preacher can preach—a sermon on homosexuality. Traditionally, African-American congregations have been reluctant to support LGBT causes, and Pastor Smith calls his church to task on the hypocrisy of preaching a gospel of love and not welcoming gay people into the church. Those are not his exact words—his are much more dramatic. “If you think gay people are an abomination,” he says, “go find every song written by a gay person in last 100 years, and don’t sing it in church!....You can’t evangelize and antagonize at the same time.” Amen!

I posted this video because the greatest holdout to LGBT acceptance comes from the conservative religious community. Pastor Smith’s words need to be spoken in congregations—black and white— not just in our own country, but all over the world.

As LGBT progress has been made—and yes, indeed, we have made almost unbelievable progress—our opposition has become more and more entrenched in its anti-gay rhetoric. Their staunch refusal to welcome LGBT people into houses of worship are, I suggest, one of the reasons the Millennial Generation is abandoning organized religion in such large numbers.

Like all of America, our religious bodies are divided along conservative and liberal lines. I am a Christian, but I find it deeply distressing that conservative Christians have defined for many outside the church what being a Christian means. We are fortunate to live in a community where churches like Epworth United Methodist and All Saints’ Episcopal, just to name a few, welcome everyone. That is not true for most of the Delaware churches beyond the immediate Rehoboth/ Lewes area. Outside of major urban areas, that holds true all over the country, and it is the reason our efforts within the walls of the places that reject us, are the very places where our work needs to be done. It has to come from the inside, and it has to be real—not just words spoken to persuade, but faithful acts of reconciliation.

Yes, my two postings are related. The teachings of religious communities who reject LGBT people are the source of the families who reject their children and create that shockingly high number of homeless LGBT youth mentioned above.

The recent Supreme Court ruling on marriage has amped up the vitriol against the LGBT community. Those of us well established in our relationships and settled in our now “mainstream” lives can take it. The disenfranchised, the young, the minority communities, the transgendered, the rejected and homeless don’t always have the resources to survive.

The sad thing for me is that I don’t doubt that many conservative Christians strive to live loving, Christ-like lives. Most of them probably believe they too are looking out for “the least, the last, and the lost,” —unless they happen to be gay. Like racism, homophobia has, in the words of Rogers and Hammerstein, “to be carefully taught.” That is still being taught in many of today’s churches.

CAMP Rehoboth has always existed to change attitudes—to create a more accepting world for everyone. We have embraced the mainstream because that was where our work needed to be done. Now, even as we celebrate our marriage victory, I hope we all take the time to look carefully for those who have been left behind.

There is still work to be done, my friends. We need to make sure we are doing it in the right places.