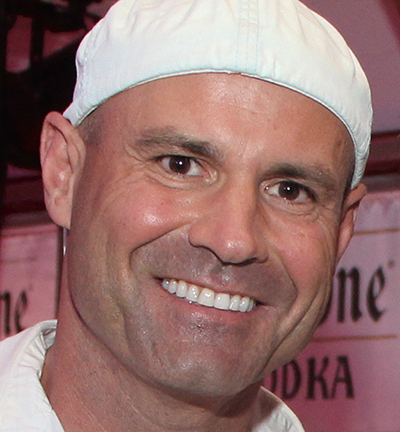 It is safe to say that few booming businesses owe their success to a Palm Reader. When Hugh Fuller first came to Rehoboth Beach he fell in love with the house at 134 Rehoboth Avenue. The presence of a Palm Reader in the doorway was in no small part of this love affair.

Hugh was born in a town close to Munich, Germany. His dad was a Green Beret in the army and his mother was a German citizen. He was one of eleven kids. When he was seven, the family returned stateside and settled at Fort Bragg, North Carolina. By this time he had a step-father who ironically was from Laurel, Delaware. Shortly, thereafter the family moved to Galestown, Maryland, on the Gales Creek close to the Delaware border. Hugh credits the Eastern Shore attributes and values as factors that shaped his development. He spent his formative years with watermen plying Gales Creek, the Nanticoke River, and the Chesapeake Bay. Fish, crabs, and soft shells were legal tender in Galestown and that association has accompanied him to Rehoboth Beach.

He graduated from North Dorchester High School in nearby Hurlock. Raised in the military spirit of contributing to his country’s safety and with his intrinsic love of travel, Hugh joined the military. Paradoxically, he was stationed in Washington, DC for his entire four year army career. The army, in its wisdom, appreciated that a well built, handsome young man would be a natural fit for the Presidential Honor Guard. He sarcastically relates that he spent four years as a glorified doorman in a nice suit. What he doesn’t mention was he was as much a target as any soldier.

He spent his off time getting his baccalaureate degree. His on duty time introduced him to the seat and privileges of power. He opened doors and escorted Ronald Reagan more times than he can count. It was an introduction to the role of government and its dominion was not lost on him. After discharge, he went to work as a boy Friday for one of the largest law firms in the district. His tenure was enhanced by an association with Warren Christopher generally regarded as “resolute pursuer of peace” for his work in the Middle East and the Balkans. Hugh credits this experience as shaping his view of life and contribution.

On a summer Friday driving on Route 9 on his way to Ocean City, his old jalopy sustained a flat tire. Of course, no spare. He must have looked dispirited standing on the side of the road. Fate intervened and Betty Mann Beebe stopped to help and took him home with her for the next three days. She engaged Matt’s Auto Care to resurrect his rattletrap. Betty sold her town to Hugh. She introduced him and showed him around. Her message was, “Give Rehoboth a Chance.” With this in mind, he applied for a job as a waiter at Mano’s on Wilmington Avenue. Never having waited tables before, Betty coached him so he could pass the interview. And a restauranteur was born.

After a season’s work, Hugh was ready for more challenges. He and a partner bought the Front Page Restaurant on Baltimore Avenue in 1993 and transformed it into The Iguana Grill. Dinner on the porch, people watching, was the “must do” for the next decade. Ready for more challenge, Hugh determined that a fine dining restaurant should go into the old Oscar’s site. But re-thinking his ideals while visiting in the Bahamas, he decided that casual and fun was more fitting and the Purple Parrot was born. In 2003, his dream house on Rehoboth Avenue became the home of the Purple Parrot. And now it is the “must do” of the Avenue.

Wow. Asked who inspired him, Hugh unhesitatingly says, “My mother. She always made me feel successful.” His mom worked three jobs but the kids never felt poor. Her philosophy of life, her love for life and for her kids, and even her German recipes are with Hugh every day.

The Purple Parrot, adding a sandy-beach, Biergarten in 2011, has evolved into a busy, comfortable, generous place to be for customers from all walks of life. Everyone is welcome. Military, police, and first responder discounts are in effect every day. No charity is turned away. No community need unmet. No contest ignored. In fact, the Purple Parrot won the 2015 Gumbo competition.

When asked what he sees as his legacy, Hugh says that he knows what the Parrot’s legacy is but he’s still working on his own. To employ writer’s license, I suspect that Hugh’s legacy does not differ from that of the Parrot. It is conspicuous in everything he does, that he incorporates the past into the present for the sake of making a substantial difference in the lives of others.