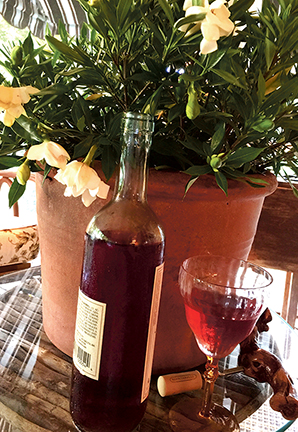 On Swimming Pools and Gardenias

One of my favorite summer traditions is potting up a gardenia for my front steps. I plant it in an Italian terra cotta pot that’s easy to move to the screened porch so the sultry fragrance from the creamy white blossoms can perfume the space while I sip on something intoxicating during the cocktail hour.

I used to import my gardenias jasminoides from Washington. Now they’re everywhere. This year, I had three varieties from which to choose. I selected “Frost Proof,” a super plant developed in Louisiana with already more than forty buds on the waxy green bush. The aroma was intense as I stood in the garden center checkout line with the lush plant cradled against my chest, so much so it caused a couple of my fellow gardeners to joke about the Rehoboth City Commission banning it. Silly, you say? Well, the city is trying to ban swimming pools and swimming pool use because a few people complain about the noise.

I can easily imagine a scenario for how a gardenia ban might come down because, let’s face it, not everyone is enamored with sweet smelling plants and flowers. It would likely begin with a concerned couple who write letters to the mayor and then make impassioned pleas at city commission meetings. “We retired here to Rehoboth,” they would cry, “and the ever present, cloying scent of gardenias is ruining our lives…. We shouldn’t be forced to smell flowers!”

The concerned couple would be joined by a young botanical zealot who complains that the gardenia isn’t native to coastal Delaware and therefore should be not be permitted to be planted in Rehoboth Beach. Someone else would jump up and proclaim that he saw a gardenia in Dewey Beach and that’s not the kind of town we want to be. A lone voice points out that the gardenia only blooms for about two months in the summer, to which a couple of people hiss. A woman in the audience looks up from her needlepoint to bellow: “They smell like a funeral parlor and they drop their leaves…these messy things will destroy the unique character and charm of Rehoboth!”

The citizens at the council meeting collectively gasp after hearing this plethora of damning evidence against the gardenia and begin chattering among themselves about how they don’t want Rehoboth associated with the smell of death. Perhaps gardenias should only be permitted in certain residential zones and their placement determined by lottery? They all agree that gardenias will cause their real estate values to decline and as a result they will be forced into eating tuna fish on Saltine crackers. Finally, the mayor uses his gavel to silence the frenzied crowd. All eyes are upon him when he announces the city will hold a workshop to discuss what is now referred to as “the gardenia nuisance.” The mob roars its approval.
This isn’t so far-fetched a scenario. I’ve attended my share of city meetings. Think back with me to some of the previous threats to our way of life in Rehoboth…

And these are just the “nuisances” I can think of off the top of my head.

The current swimming pool controversy bothers me not because I own a pool—I actually prefer a dip in the cold Atlantic—but because it shines a light on the reactive nature of our city government. I’m admittedly not one of the active and involved citizens who pen letters and attend a lot of city commission meetings. I am a writer, though, and a social observer. I vote, and I try to keep abreast of things going on in town. To this writer it seems that fear mongering, squeaky wheel crank lobbying, and knee-jerk reactions drive policy in this city rather than good data, sound analysis, smart solutions, and partnerships for change. Thoughtful long term planning appears to me to be beyond the scope of elected officials in Rehoboth. Several holistic approaches to planning such as neighborhood and historic preservation ordinances have been commissioned by the city over the past thirty years, but never enacted. What we get is piecemeal legislation in lieu of foresight.

Let’s face it, we all experience things in our lives that bother us. And we all do things that not everyone likes, myself included. One of my neighbors cannot abide the endless stream of contractor trucks speeding by his house every morning. Another can’t stand the sound of shrieking children he can hear from Funland—a half a mile away! Personally I hate leaf blowers. The high, whiny squeal pierces the air, cutting through the peace like a hot knife through butter. They are so loud and so prevalent that sometimes I can’t even sit out on the screened porch and write.

Would I rather folks rake their lawns than hire loud yard crews? Yes. But am I going to call the cops every time I hear a leaf blower, weed wacker, or power mower? No. Neither will I write a hundred letters to the mayor to try and get leaf blowers banned like some municipalities have. Not me. I try to be a good neighbor and I accept the fact that inconveniences like leaf blowers and swimming pools are the price I pay—we all pay—to live in a dense, delightful, diverse, and desirable resort community like Rehoboth. If I wanted to live in a retirement community or in a quiet suburban residential community, I wouldn’t have bought property in “The Nation’s Summer Capital,” as the entrance to Rehoboth so proudly and boldly announces. “The Quiet Resorts,” by the way, are down the road in Bethany Beach and Fenwick Island.

That said, I do worry about how high a price we all will pay if the city continues its Band-Aid approach to problem solving and if more and more homeowners and visitors think only of themselves without considering their neighbors, community aesthetics, and civic responsibilities. There’s got to be a better way because otherwise cocktail hour—and life in Rehoboth—without gardenias will not be very sweet.