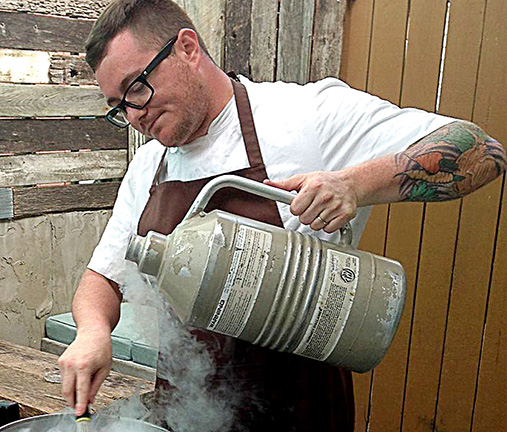 a(MUSE.)’d and Amazed by Award-Winning Cuisine

It all started at The Buttery in Lewes, when a young server was recruited to pinch-hit at the salad station. He spent so much time fussing over each plate—arranging it with tweezers, yet— that he almost lost his job. But he quickly became hooked on the tension and creativity of the professional kitchen.

He eventually landed at the old Ram’s Head restaurant in Rehoboth, then moved to the old Cloud 9 where he became what he calls “sous chef in-training.” After working at Espuma with then chef/owner Kevin Reading, he joined Kevin at Nage. Formal training seemed like the next logical step, so he enrolled in the culinary program at Walnut Hill College in Philadelphia. He graduated at the top of his class. He returned to his Cape Region roots, working hand-in-hand with new boss Josh Grapski to put the then fledgling Nage on the map. That young chef is none other than native Delawarean, Hari Cameron.

Who would have thought that the quiet and unassuming Hari would shake things up with such a cutting-edge concept as his very own a(MUSE.) restaurant on Baltimore Avenue? At Nage, plates brimming with prime rib, pork shank, and duck breasts were certainly his claim to fame. But under that gentle demeanor there lurked a daring revolutionary! Small plates, artfully designed (yes, with tweezers) with names like Toad in the Hole, Cool Hand Fluke, Black Trumpet Pasta, and Nettle Meadow Kunik belie the precision that goes into them. The small plates and the names change like the winds here at the beach, but they’re always big on taste and design. And they have not gone unnoticed by those whose job it is to notice.

In 2013 Cameron garnered the Delaware Restaurant Association Restaurateur of the Year Award. In 2014 he was named semifinalist for the James Beard Foundation Best Rising Star Chef Award. And this year he has been honored yet again for his nomination for Best Chef Mid-Atlantic.

So what’s the big deal about this James Beard thing? Established in 1990, the James Beard Foundation honors the memory of gourmand, author and educator James Beard with awards that recognize culinary professionals for excellence and achievement in their respective fields. The criteria emphasize the Foundation’s mission to celebrate, nurture, and honor America’s diverse culinary heritage through programs that educate and inspire. Known as the Oscars of the food world, the James Beard Awards cover all aspects of the industry: chefs and restaurateurs, cookbook authors and food journalists, restaurant designers, and brewery/distillery professionals, to name a few. In short, the James Beard Awards are the highest honor that can be bestowed upon food and beverage professionals in America.

a(MUSE.) is anything but your typical restaurant. But Chef Hari has proven beyond a doubt that serious diners are ready for his daring expedition into locally sourced ingredients, artistically crafted in his unique style of modernist gastronomy. He crafts many of his signature dishes using state-of-the-art techniques such as sous vide, lacto-fermentation and liquid nitrogen, while ingredients like black garlic, peekytoe crabs, ossetra caviar, hen o’ the woods mushrooms and even salt-water taffy make cameo appearances in appetizers, entrees and desserts. a(MUSE.) also offers its share of large plates, but foodies-in-the-know summon up a flight of four, seven, or eleven dishes (each flight preceded by an amuse bouche like cucumber sorbet or roasted figs), then look Hari squarely in the eye and say, “OK, chef. Surprise me!” Those words trigger a one-of-a-kind experience here in Rehoboth Beach. Soothing to eat. Beautiful to behold.

Now here’s the fine print: If you’re looking for a three pound lamb shank wrapped in bacon with gravy and a mountain of mashers the size of a ’57 Chevy hubcap (not that there’s anything wrong with that), this is not the place for you. But if you’re prepared to take a walk on the wild side—dinner-wise, that is—with the award-winning and nationally recognized Hari Cameron, you will not be disappointed.