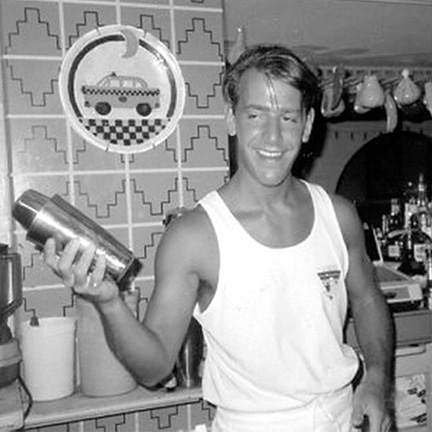 Rehoboth once knew him behind the bar, but now cyclist Gill Sperlein is raising the bar for fundraising to prevent AIDS.

Former Rehoboth Beach resident Gill Sperlein is training to join thousands of other participants this June for AIDS/Life Cycle—the seven-day, 545-mile bike ride from San Francisco to Los Angeles that is the world’s largest annual, single-event AIDS fundraiser. This is his second time participating in the event, the first time occurring a long 15 years ago. The ride takes place May 31-June 6.

“I did the ride (then called the California AIDS Ride) in 1999—15 years ago. I have thought about doing the ride again for a long time and I’m glad to be back... at 51 the fundraising is a little easier but the training is a lot harder,” he says with a smile.”

Sperlein, who lived in Rehoboth in the late 1980s and early 1990s and has been HIV-positive for many years, has always worked to fight HIV and AIDS, and getting back on his bike for his first long ride in 15 years is typical of his passion and energy for causes important to him.

Sperlein, who first came to Rehoboth in the summer of 1985, worked at a then-new restaurant and bar called The Palm, where Cloud 9 was and Lula Brazil now operates. Later, he went to work for Astral Plane next door, which was, for years, Sydney’s, but is now Pig & Fish.

But Sperlein really found his Rehoboth home as a waiter and bartender at the old Tijuana Taxi on Rehoboth Avenue, when it was part of the Blue Moon family of restaurants. “I bartended at the Taxi for two summers while also working at Blue Moon catering, The Strand, and Westside Cafe,” says Gill.

In other words, Gill’s own coming of age days mirrored the Rehoboth gay business community’s adolescence. From there, this Baltimore native went on to law school, a move to San Francisco, and years spent as an attorney.

“I am committed to AIDS/LifeCycle because I want to do my part to see an end to HIV/AIDS. With the money I’ve raised, the Los Angeles LGBT Center and San Francisco AIDS Foundation can continue to provide critical services for the HIV-positive community and prevent new HIV infections through programs, services, and education,” says Sperlein. “I look forward to spending a week on the road with the amazing community of AIDS/LifeCycle participants.”

Gill is riding with Team Mary—50 riders joined together with a goal of raising $500,000. Each team member gets a “ Mary name.” Gill is nicknamed Mary Margo St. James, recalling a celebrated early 1970s feminist and worker for prostitution rights—a topic he has woven into his thriving law practice.

In the seven days it takes the riders to reach Los Angeles, more than 1,000 people in the United States will become infected with HIV. Especially alarming is the fact that one out of every five people living with HIV nationwide is not aware of their status.

“What these cyclists contribute to the fight against HIV/AIDS is truly remarkable,” said AIDS/LifeCycle Senior Director Greg Sroda. “Each year people from across the country and all over the world join us not only because the event is a life-changing experience for them, but also because the money they raise changes the lives of people living with HIV. Since the ride began in 1993, our participants have raised more than $200 million and completed more than 42,000 journeys from San Francisco to Los Angeles.”