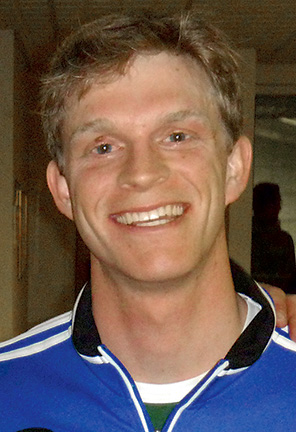 As a junior at Colby College, Eric Barthold took an education class called “Boys to Men.” When a senior writing her thesis about sexual assaults on the Maine campus spoke to the class, Barthold felt uncomfortable. A soccer player and ski racer in high school, he realized that much of that discussion involved the role of male athletes.

He co-founded a club called Male Athletes Against Violence. Soon renamed Mules Against Violence—in honor of Colby’s mascot—the group had two goals: to raise awareness of sexual assault on campus, and change the stereotypes of male athletes. MAV members did unexpected-for-jocks things, like partnering with the gay-straight alliance, and joining the quilting club to sew in the student center.

A “Take Back the Night” anti-sexual violence event—typically attended by 30 people—drew 200, when MAV invited representatives of every sports team to attend.

After graduating in 2012, Barthold taught English, and coached soccer and ski racing. He also interned for 11 months with Grassroot Soccer, an international organization that uses soccer to educate communities to stop the spread of HIV.

As he worked with young men, Barthold realized that Colby’s program could spread beyond his small New England school. He developed a program he could take to male sports teams. He called it “Man Up and Open Up.”

“Man Up” sessions are hour-long conversations that center on American society’s idea of what it means to be a “real man.” Barthold helps middle and high school boys understand the power of language, and the homophobia and sexism that pervades the subject of masculinity. He gets teenagers talking about an often-taboo subject: “What does it mean to be a guy?”

A key component of the workshop is a “Man Box.” Barthold draws out the many stereotypes of masculinity. Inside the box are words like “cool, confident, stoic, tall, responsible.” Outside are “wimp, soft, flamboyant, girly, gay.” That leads to a discussion of the pressures boys feel to act a certain way— and the anxiety that accompanies those pressures. “Boys never realize they’re under those pressures,” Barthold notes. “Being able to see them, and name them, is really important.”

Next, Barthold asks how boys can continue to live “inside” that box—but also outside it. The rest of the session follows from there.
Berthold asks why the stereotypes outside the “Man Box” are characterized as “weak” or “feminine” by the boys. Challenges to masculinity—Don’t be a pussy,” “Are you a fag?”—arise at nearly every workshop.

Barthold tries to help boys understand that they can exist both inside and outside the box. He’ll ask if someone can be two things at once— for example, gay and tough. To prove his point, he talks about a friend from Colby who is a national champion sprinter. “When I hear someone say ‘that’s so gay,’ he’s the person I think of!” Barthold says.

“It’s important to break through the cloud of anxiety that separates the ‘Man Box’ from the outside,” he adds. “Most boys haven’t thought of things that way. But if these conversations help boys see that they can be responsible, sensitive, and caring—and still be ‘masculine’—they’ll feel more free to live their lives not just inside one small box.”

Through his “Man Up” workshops, Barthold has connected with a broad group of people who are talking about masculinity in American society. He realizes that attitudes in the Northeast—where he has done the bulk of his work—may not be the same as the rest of the nation. But that’s all the more reason to keep working.

Feedback has been excellent. A high school dean of students says Barthold’s ability “to get to the core of the issue, dissect gender stereotypes and behaviors, use humor and storytelling, and talk openly and honestly about issues facing the male population today, is unmatched.” A physical education teacher suggested the program be standard curriculum for middle and high school boys.

But the most important praise comes from boys themselves. “Trying to fit into the stereotypical ‘man box’ is not something we should try to fit into,” said a student at Carrabasset Mountain Academy. “The media tries to play up that kind of man.”

“I liked how Eric was so open to our ideas,” added a student at Burke Mountain Academy. “I also liked how he showed us how much pressure we exert on ourselves, and how we can help each other as a community to relieve some of this pressure.”

Times are changing quickly, Berthold says. More and more boys are aware of gay athletes, and each month another male sports figure comes out. But every time he draws a “Man Box,” the same words appear inside the box—and out. So Eric Berthold will continue to “Man Up.”