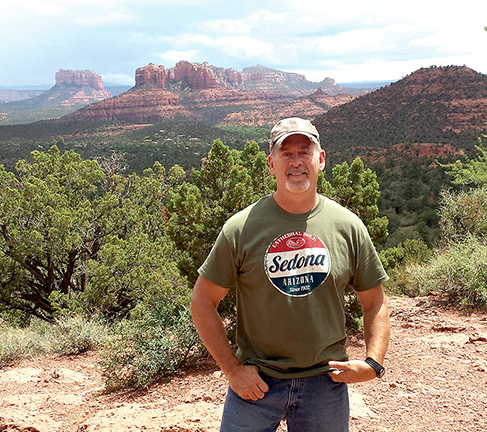 The first inkling I had that retirement was in the offing was when I saw Jon Worthington pull his SUV into his driveway. White knuckles on the steering wheel and a 250 gallon tank of water and Koi onboard. Jon had driven this payload from Tulsa, Oklahoma to Rehoboth Beach. Jon’s loyalty to the Koi is a constant, mirroring his loyalty to his friends and family.

Jon was born in Boise, Iowa. He describes his childhood as idyllic. His mother was a school teacher. His dad, a World War II veteran, served at Iwo Jima; his father is shown in one of the Raising of the Flag pictures. When I wrinkle up my nose and ask, “What was it like in Boise, Idaho?” Jon brightens and exclaimed that Boise is the center of the great outdoors—white water rafting, hunting, and skiing. He describes Boise as a sportsman’s paradise that he grew up reveling in. He describes his father, an engineer with the Idaho Power Company, as his hero. Jon credits his dad for lovingly teaching him how things worked and how to conquer athletic and engineering challenges. Jon said that his father always knew he was different but that didn’t interfere with his father’s all-encompassing love and caring for him.

Jon left Boise for Westminster College in Salt Lake City to study dentistry. Dentistry would have been a perfect fit for Jon’s creativity and exceptional dexterity, but, by his own admission, he ran afoul of chemistry. Consequently, he switched to engineering.

After graduation, Jon moved back to Boise with his first partner. I ask if this had been a challenge. Not at all. Jon explains that he and his partner were accepted and well regarded in the community. His school teacher mom embraced them. Jon followed his dad into the Idaho Power Company which was the first step in a 25 year career in electric power.

The relationship faltered after four years and John was ready to expand his career prospects. He entered the US Government’s Department of Energy. The Department of Energy is a huge umbrella under which all manner of programs exist. His first assignment was in Wenatchee, Washington with Bonneville Power Administration’s hydro dam. This began a steadily upward climb in energy conservation and hydro dam management. When Jon reflects on this time, he expresses amazement at how much he loved his job and how all of the aspects of it came together in his mind. In his spare time, he completed an MBA to round out his educational profile.

Jon was transferred to DC in 1986 directly to the Department of Energy. He bought a townhouse on Capitol Hill. When asked how the neighborhood was, he laughs and says, “I was a pioneer.” But then and now, he delights in the architecture and design of the neighborhood. He shakes his head and wonders aloud how he could have been so lucky. But the DOE had ongoing plans for him up the nationwide administrative ladder. The journey upward continued until he was appointed CEO of the Tulsa, Oklahoma Hydro Dam Power system which was suffering from low morale and grossly inefficient leadership. It was a challenge designed for Jon.

Jon reports that this was an overwhelming experience, professionally and personally. He made excellent friends, re-habilitated a wonderful house, and succeeded beyond expectations at his job. Bryan, Jon’s partner, was equally enthusiastic despite his having to commute to DC every week. But again, the DOE had plans and transferred Jon back to DC to report to the Deputy Assistant of the Department of Energy as a consultant. Shortly thereafter, Jon decided that this was the last stop on the career train.

When asked why he was so good at his job, he shrugs, “People like me. I motivate them to succeed.” But thinking deeper, he concludes that he has the ability to think strategically about long term opportunities and goals and to reposition staff and assets to capitalize in this context. His thinking matured after 9/11 to naturally include risk and safety. “I just see the whole picture.” There is no wonder that the Assistant Deputy wanted to meet with him daily.

When asked who most inspired him during his life, he chokes up. His father led the way for Jon to pursue his goals, accept and love himself, fix broken things, build, hammer, and saw, and set the framework for his life. He says that he still thinks of his father when he has decisions to make.

In retirement, Jon is pursuing a Master’s Degree in Spiritual Psychology for which he regularly jets off to California. Asked why he chose this subject, he expresses that he seeks always to improve his heart-centered listening skills. He volunteers extensively in Rehoboth and is always open to doing more.

When asked what he would like his legacy to be, he reports, “I’d like to be remembered as someone always ready to help.”