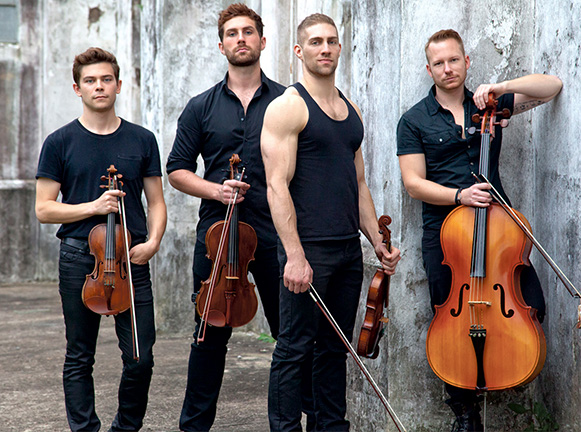 People who appreciate a solid dose of fun with their music won’t want to miss the upcoming concert with “Well-Strung,” an all-male string quartet that’s been delighting audiences around the world. The group is back for its third visit to Rehoboth Beach, where sold-out crowds were left cheering and begging for more. Well-Strung will play at the Rehoboth Beach Convention Center Saturday, July 25, at 8 p.m. The musicians, who are accomplished classical artists with a sense of flair (and humor), are returning with an all-new show: Summer Lovin’. The concert is being hosted by CAMP Rehoboth, as part of a year-long celebration of its 25th anniversary. Tickets are in limited supply and range from $35 to $100 for cocktail table seating at the front. They can be purchased online at camprehoboth.com or stop by CAMP Rehoboth (37 Baltimore Avenue) during office hours or call (302) 227-5620.

Well-Strung is an accomplished group of classical musicians who put their own spin on Mozart and Vivaldi, but also take on Rihanna, Adele, Lady Gaga, and other contemporary artists. Their shows delight audiences with the musicians’ rare combination of technical expertise and outrageous sense of fun. The New York Daily News called them “the hottest things with a bow since Jennifer Lawrence in The Hunger Games.”

Steve Hoult, CAMP Rehoboth board member and the event organizer, says: “We are thrilled to have this remarkable group back in Rehoboth for CAMP Rehoboth’s 25th anniversary. Well-Strung loves the Rehoboth Beach community and is eager to help us celebrate.” Audience members who have seen Well-Strung say you have to see the show to believe it—it’s like nothing you’ve ever seen before. Video clips from some of the group’s performances can be viewed online.

Well-Strung consists of first violinist Edmund Bagnell, second violinist Christopher Marchant, cellist Daniel Shevlin, and violist Trevor Wadleigh. The quartet was formed by producer/ co-writer/manager Mark Cortale and Christopher Marchant. Individually and as a group, they have played concerts around the world, and have theater credits in addition to their impressive musical accomplishments. Well-Strung has been featured in a wide variety of newspapers and magazines and has appeared on television news programs and the Today Show.

The presenting sponsors for this year’s show are Stephen Manos, and Midway Fitness and Racquetball. The sponsors for the show are Monica Parr and Emilie Paternoster in Memory of Charlie Lee, Horst Boehlendorf (Horst’s Consulting Services, Inc.), Keith and John Riley-Spillane, MissMar, and the Breakers Hotel & Suites.
As a bonus, ticket holders are invited to participate in a Meet and Greet with the performers at Dos Locos after the show.