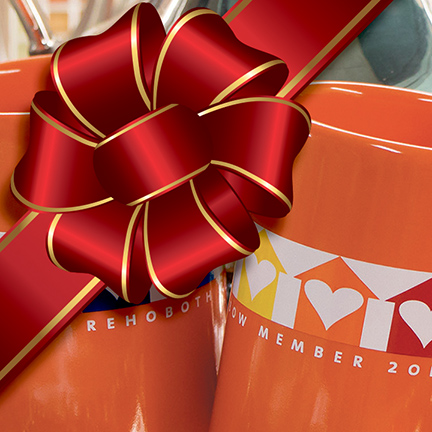 Make an End of the Year or Membership Gift

In the spirit of giving that comes with the  holiday season, now is the perfect time to consider making a gift to CAMP Rehoboth. There are many ways to support the work of the organization: an end of the year donation, a gift in memory or in honor of a dear friend or loved one, the gift of a CAMP Rehoboth membership, or by simply matching a membership level amount, or obtaining a matching company contribution. DC Gay Chorus in RB with The S* Show

*Sondheim! Sinatra! Streisand! The S* Show celebrates three great performers (whose names just happen to all begin with S!) in one evening. This very special concert at the CAMP Rehoboth Community Center, featuring select soloists from the Gay Men's Chorus of Washington DC, is here for only three performances. The S* Show is a benefit for CAMP Rehoboth and the Gay Men's Chorus of Washington, DC. The CAMP Rehoboth Membership Committee recently announced the formation of a CAMP Rehoboth Five Year Member Club. Starting sometime in 2016, those who have been members for five or more years will receive a money card to use toward admission to CAMP events. The one time card must be redeemed in person at the CAMP Rehoboth office when purchasing a CAMP Rehoboth produced event ticket. Watch for more details. CAMP Rehoboth’s November Volunteer Orientation set a new record with 21 new CAMP volunteers participating. With dinner and a round of CAMP inspired Jeopardy questions, the evening was fun and educational. The first orientation of 2016 is scheduled for March 1 from 6-8 p.m. During the fall season, members of the CAMP Rehoboth Outreach Program (CROP) worked with artist Catherine Czerwinski and the children of Burton Village to create a community mural. Shown with Catherine (back row center) and the CAMP Rehoboth volunteers are the many budding young artists who pitched in to make the project a big success. Vienna to P’town— Letters on the Road

Letters from CAMP Rehoboth always makes for a good traveling companion, and was recently seen in the company of: Jim Slusher and Thom Morris in P’town; in Vienna, Austria with Tom Jamison and Don Wainwright; on a Caribbean cruise with Matt Turlinski, Jerry Sipes, Joe Finocchio, Bob Hoffer, Max Dick, Bob Harrison, Dave Goodman, and Neal Frock; and finally, with Kathy Wiz and Muriel Hogan on a Sundance trip to St. Bart’s. The Perfect Season for a Gay Wedding!

There is no bad season for a gay wedding, but late fall on the Delmarva Peninsula has been particularly beautiful. Vicky Coleman and Trinity Coleman were married on October 31, in a spectacular Halloween weekend celebration in St. Michael’s, Maryland. Bill Taylor and Rich Decker  were married in a beautiful ceremony on November 14 at the CAMP Rehoboth Community Center. To have a wedding photo included in Letters, email a high-res photo to Letters.