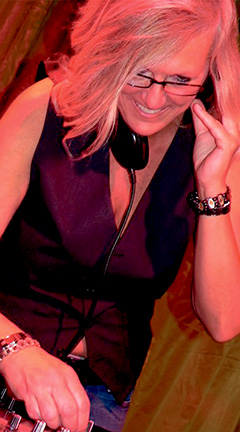 “Life may not be the party we hoped for, but while we’re here we should dance” is an apt quote to describe Jamie Fox. When asked where she grew up, she shrugs and explains that her dad was in the military and home was where he was stationed. Jamie was born in Detroit but her parents had met on the beach in Florida. A peripatetic childhood had lasting effects and Jamie is at home wherever she happens to be. At this time, that’s Rehoboth Beach.

Jamie’s childhood was an active one. Her mother encouraged exploration and creativity. She was a bright child who found school easy and unchallenging. She ruefully describes herself as a “smart ass” who sailed by with little effort. She took up the guitar at age eight; she was playing and writing songs by age thirteen. She was heard by the mailman who offered her a place in his band. Her mother checked him and his bandmates out and encouraged Jamie to give it a shot. She played in the band briefly but quickly experienced a change of focus. She fell in love with the mechanics of music and at age 13 became the sound engineer for the band. This started a major career focus. In a small venue the sound engineer operates the sound equipment, reproduces the sound on stage, and provides for the quality of the listening experience for the audience.

At seventeen, Jamie enrolled in community college in Biloxi, Mississippi to study broadcasting and journalism. Needing money, she walked into the local radio station cold and applied for a job. She was astonished at the broadcasting power of this station and by the end of the day she was announcing the news and riding herd on the equipment. In her spare time, she worked as a short order cook. She was not afraid to do anything but her spirit was always spinning dance music. You can hear Jamie say over and over, “Music makes people come together.”

For the next decade, Jamie crisscrossed the country working and succeeding in multiple venues. She rattles off parties she hosted in Houston, Tampa Bay, South Beach, Sarasota, Baltimore, and Washington. She details all of the radio stations where she spun records and broadcasted the news. By the mid-eighties, Jamie was a well-known on-air personality on the professional club circuit. She packed dance floors at hundreds of clubs and pride festivals. She even found time to work as a guidance counselor at a junior college and do free-lance technical writing. She made thousands of contacts, many among Artist’s Represen-tatives who clued her in early on new artists and new albums. Jamie was among the very first to play Madonna. Asked what this meant to her, she beams, “Bringing people together.” Jamie has never taken her abilities for granted and expresses incredulousness at her gift. She describes herself as a catalyst whose words and actions instigate a chemical change that brings people together.

Despite the celebrity, Jamie reports that she was “…barely eking out a living and needed to settle down.” She began traffic reporting on WBSB-FM in Baltimore. She lived a mainstream life for three years. She learned of a beach resort, Rehoboth, and began visiting on weekends. What turned the tide? Gordon’s Pond! Let me guess, you threw a party. Where? The Strand. The Strand was a dance club started by Joyce Felton and operated by Steve Elkins. The City of Rehoboth Beach did everything to put it out of business and succeeded in 1993. As a result, Steve and his partner, Murray founded CAMP Rehoboth and as we say at the beach, the tide had turned.

Jamie was fascinated by what was happening in Rehoboth. As is typical for her, she cold called Wayne Hodge, the manager of The Renegade disco on Route 1. She persuaded a reluctant Hodge to let her throw a Tea Dance for women on Saturday afternoons. “It hasn’t worked.” “It will never work.” It worked. How? Week after week, Jamie went out to Gordon’s Pond and handed a Tea Dance flyer to everyone on the beach. Jamie stamped her brand on women’s dances in Rehoboth Beach. And for eleven summers, the Tea Dances held sway on the early weekend evenings.

Rehoboth has been home to Jamie ever since but that hasn’t stopped her traveling cross country throwing parties, doing technical writing, consulting, and property management. Who inspired you, Jamie? “My mother. My 5’2” mother who’d try anything. She was an adventurer, a prospector, a risk taker. She wasn’t afraid. She gave me courage and confidence that things would turn out all right.”