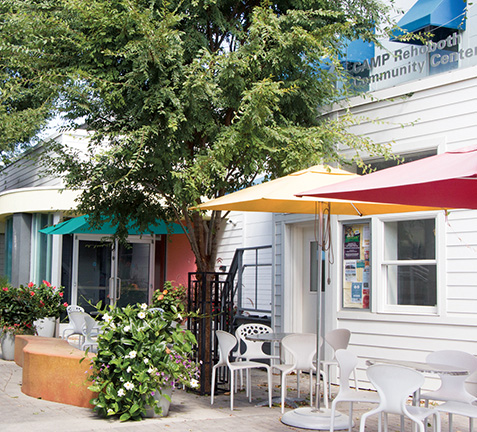 The day of the CAMP Rehoboth 25th Anniversary Block Party was perhaps the most beautiful day of the year, and for a few hours on that glorious October afternoon, it seemed as if all of Rehoboth had come out to celebrate.

Though unplanned, the day of the Block Party just happened to also be National Coming Out Day, and watching that jubilant crowd on Baltimore Avenue, I couldn’t help but think what a perfect coincidence that was. I also couldn’t help but remember 35 years ago when the Blue Moon first opened the doors of its bar, and suddenly a crowd of gay people spilled out onto the sidewalks of Baltimore Avenue for the first time. It was most definitely a “coming out” experience for Rehoboth Beach.

Suddenly gay people were visible—and identifiable—on the streets of Rehoboth Beach. That was a good thing, but not without its dangers, and for many years after it opened the Moon was a target for homophobic attacks. On numerous occasions, we heard the word “faggot” screamed from a passing car speeding down Baltimore Avenue.

The main reason that the founding members of CAMP Rehoboth were adamant about our organization remaining in downtown Rehoboth Beach was visibility. Sure, we could have found a cheaper space out of town—and with parking—but our visibility on Baltimore Avenue has always been crucial to our ability to create a positive environment. To us, in those early days, hiding somewhere out of town was akin to being in the closet.

The reason we have a National Coming Out Day, and why CAMP Rehoboth has always tried to be visible, is to fight the closet. The closet may seem like a harmless enough place—a safe place of retreat—but deep inside its darkness it is dangerous to the heart and soul.

Many years ago Epworth United Methodist Church began the process of welcoming openly gay people to its congregation. The first step was gay people becoming visible in the congregation. As the church got to know us, the conversation deepened, the friendships grew, and inclusive language was added to the church’s vision statement. Eventually, the whole church voted to become members of the Reconciling Ministries Network (RMN)—a group of Methodist churches, groups, and individuals who have chosen to welcome all people into the full life of the church.

All that was many years ago, and since that time, Epworth has become known for the powerful work it does throughout the community for a wide variety of social causes. Not long ago, however, I got word from a couple of gay members suggesting that perhaps we don’t need to talk so much about gay issues anymore. I thought about that for a time—and then I looked around to see how many other United Methodist Churches in the Peninsula Delaware Conference were members of the RMN. The answer: none.

A recent Huffington Post article contained figures by Bogdan State and Nils Wernerfelt detailing how LGBT visibility over the past year—and especially in relation to the Supreme Court’s decision on gay marriage—had dramatically increased the number of people on Facebook identifying as LGBT, and the number of people who were fans of LGBT related Facebook pages. Their figures showed that on the day of the Supreme Court’s decision, 2.5 times as many people came out on Facebook as had come out the previous year on the same day.

Over the 25 years that CAMP Rehoboth has been in existence, our visibility has had a tremendous impact on our success. Through Letters from CAMP Rehoboth, we are visible in stores and restaurants all over the area. Our willingness to promote area non-profit organizations—both gay and straight—has given us a strong network of support. Our mission to “create a more positive” environment for all people and our vision to be “the heart of the community,” keeps us consistently working for human rights. From CAMPsafe to the CAMP Chorus and CAMP Outreach and Women’s FEST, our programs keep us involved with the community.  Perhaps most of all, the presence of the CAMP Courtyard and CAMP Rehoboth Community Center keep us firmly planted in the physical heart of Rehoboth Beach.

CAMP Rehoboth was born on Baltimore Avenue, and Baltimore Avenue has been its home ever since. On the morning of the Block Party as I watched teams of our amazing volunteers setting up tents and tables all along the street, I knew it was going to be a good day—and I was thrilled that we were celebrating on the street that is so much a part of both Rehoboth’s gay history and CAMP Rehoboth’s history.

Where gay issues are concerned, there is no doubt that opinions are changing—faster than most of us ever imagined—and yet there still remains a need for a visible and steady presence at the heart of every community. Young people continue to struggle with what it means to come out. Out senior citizens are sometimes forced back in the closet when they enter nursing homes. Conservative churches still blame “homosexuals” for all the ills of the world. Unforgiving families still reject their children and by doing so, contribute to the growing number of LGBT homeless youth in the world. Transgender people continue to fight for understanding and acceptance—from both the gay and the straight communities.

CAMP Rehoboth and other LGBT Community Centers provide ongoing advocacy for those not able to fight for themselves. We are a visible beacon to those in need of a safe place, in need of a role model, in need of a place to turn for guidance and support.

During the very earliest meetings and workshops (on Baltimore Avenue, by the way) that went into creating CAMP Rehoboth, there was a discussion about including a lighthouse beacon in the imagery and the verbiage about the organization. Ultimately we didn’t use it, but the idea of the lighthouse—a place of refuge in a storm—continued to be a part of the CAMP philosophy and was eventually consolidated into the house and heart logo we use today.

Perhaps the greatest gift that CAMP Rehoboth can give to its community is simply to remain visible—to provide a “home” in whatever capacity is needed.

Thank you to all who came out to dance in the street with us as we celebrated our 25th Anniversary! Thank you to the Anniversary Committee, the CAMP Rehoboth Board of Directors, our volunteers, our sponsors, our members, and all who have supported us for the last quarter century.

Murray Archibald, CAMP Co-founder and President of the Board of Directors of CAMP Rehoboth, is an artist in Rehoboth Beach. Email Murray. Photos: The CAMP Courtyard; Pamala Stanley and Block Party Volunteers on Baltimore Avenue.