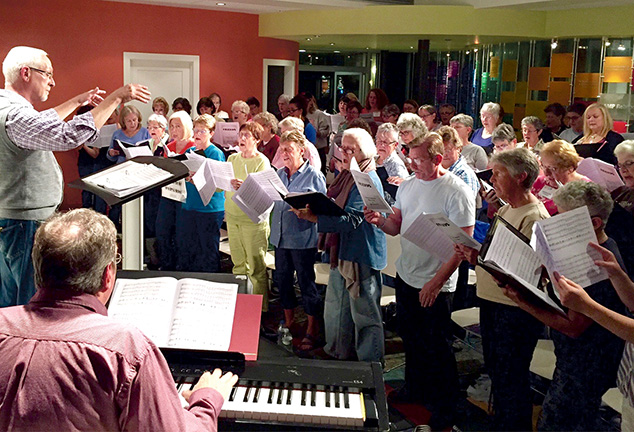 The CAMP Rehoboth Chorus, a community choral group, is a program of the CAMP Rehoboth Community Center. The Chorus provides high-quality musical entertainment for diverse audiences in Delaware. The CAMP Chorus reflects CAMP Rehoboth’s vision to “Create a More Positive Rehoboth” by reaching out to all and bringing the community together through the power of song.

Now 87 singers strong, young and old, gay and straight, the CAMP Chorus brings a variety of musical abilities and voices to the group. Each year, membership has increased in number and diversity. In order to maximize the talents of members, the chorus offers combinations of full chorus, ensembles, and solos in their shows. The repertoire consists primarily of American 20th and 21st Century popular music, with leadership from music and artistic director Doug Yetter and accompanist David Zipse.

Concert themes and music are selected by Music Committee members in collaboration with the director in a fun, shared experience for the singers and audiences. The 2016 theme for its February 12-14 concerts is Classy, Brassy, and Sassy—Songs with Attitude.

The CAMP Rehoboth Chorus is funded in part by a grant from the Delaware Division of the Arts—a state agency dedicated to nurturing and supporting the arts in Delaware in partnership with the National Endowment for the Arts. Additional support comes from donors and advertisers. For more information, call 302-227-5620.

Fay Jacobs and her solo performance of Aging Gracelessly: 50 Shades of Fay will return to Rehoboth for two shows on November 7 at Metropolitan Community Church. This is Jacobs’ last scheduled performance of the reading in Rehoboth prior to touring with the show through next spring and summer.

The reading, which has garnered sell-outs, rave reviews, and terrific word of mouth, is comprised of two short acts (with an intermission for cocktails!) and is based on Jacobs’ four published memoirs, her hilarious columns, plus an all-new narrative covering LGBT issues, Rehoboth’s proud history and the national and Delaware fight for marriage equality.

At its core, the reading, or sit-down comedy routine, highlights the author’s insistence that nothing is ever so horrible if it’s worth the story you can tell. The event will have Fay’s signature humor and relatable stories of our community tackling life, liberty, and the aging process.

Terry Plowman of Delaware Beach Life magazine says, “It’s a brilliant piece of work. Funny—of course!—but also insightful, moving, and quite informative about the struggle for gay rights. If you haven’t seen it, don’t miss the chance!”

So come along for the ride as Fay and her wife Bonnie share life in one boat, two condos, two houses, and an RV, loving a succession of Schnauzers, and being domestic partnered, civil unioned, and married.