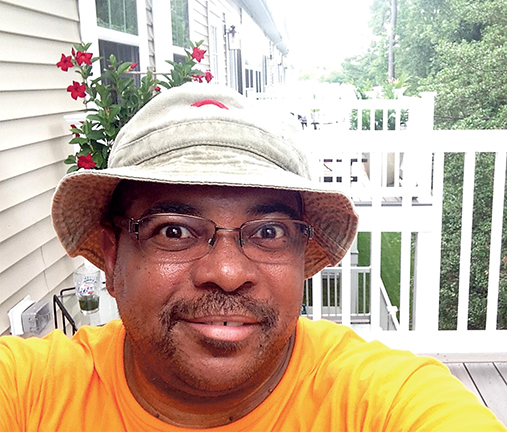 Lyndon Johnson: Hail to the Chief

In tribute, Lyndon Johnson’s mother named him for the president. Mrs. Johnson had come from Durham, NC to Wilmington, DE for a new beginning. Ironically, she settled at West Third and DuPont across from a city park named for Wilmington’s only Baseball Hall of Fame member, William “Judy” Johnson. But Mrs. Johnson went with Lyndon rather than Judy. Lyndon only chuckles when asked if his name was a burden.

Lyndon relates that he came from a family that simply didn’t talk or share information. What he knows about his mother and dad has come from years of digging and listening to the odd conversation about families. He concludes that his mother had an abused and neglected upbringing, but she would never discuss it. Lyndon learned at an early age that he had a brother who lived with an aunt. No number of questions would pry information from his mother about his brother. His parents separated when he was five or six years old. No reasons were given. No reassurance was made.

Lyndon describes his mother as not only “close-mouthed” but also verbally harsh. After one particularly severe episode, crying, he huddled in his room. Thinking, questioning, he realized that Jesus was with him. He was only six years old but knew without doubt that he was protected. He emphasizes that this knowledge alone has propelled him through life safely.

Lyndon attended local elementary and middle schools. His mother moved frequently but not more than two or three blocks away. Busing in 1981 uprooted him from his neighborhood. But, he reports, “Busing was good for me. I learned about other cultures, other beliefs.” He ran track and sang in the chorus. He studied drafting but his love was music. He played the trumpet and studied every instrument thrust his way. The merging of his innate religious beliefs with music created an indelible bond within him. This bond is his guiding light which reinforced his belief that we all have purpose.

Lyndon’s mother’s behaviors grew to unacceptability. With no family to help, Lyndon took himself and his sister to Delaware Social Services. His mother was hospitalized and his sister went into care. Lyndon’s aunt offered him lodging in her basement. She collected a fee for caring for him but provided minimal support. Lyndon coped by getting a part time job at the Medical Center in the dietary department. He beams when he describes how much he loved his job delivering trays to patients.

In view of his unconventional upbringing, he is asked who inspired him. Without hesitating Lyndon evokes, “Yvonne Terrill Jensen, my English teacher at Howard High School. Mrs. Jensen, an outspoken civil rights activist, taught theatre and English for many years inspiring scores of students. From Mrs. Jensen, Lyndon discovered that he could be anything he wanted to be.

After high school Lyndon went full time at the hospital and to Delaware Technical and Community College studying business. Upon graduation, Lyndon joined the rapidly expanding banking industry in customer service. He was a natural and rose to supervisory positions in Delaware and New York banks. He and his partner who was the executive chef at a country club bought a house in the Wilmington suburbs and experienced a successful, prosperous life.

But his partner was conflicted because his father and sister lived alone and needed care. With Lyndon’s heartfelt support, they sold their house and bought the one that the family was living in. As it turned out this was not a good decision. Lyndon’s partner of 30 years died in 2012. With no legal rights, Lyndon suffered catastrophic legal, financial, and social losses. Years of caring for others at his expense took its toll. Unable to perform his job at his own expected level, he took a year’s sabbatical. He hoped to restore himself.

Returning to high level employment at the end of his sabbatical was not the issue. Multiple corporations wanted his energy and expertise. But Lyndon’s faith in himself was flagging and his “aloneness” was discouraging. He took the geographic cure and moved from Wilmington to Harrington. Harrington?? He raises his eyebrows, laughs, and says, “What did I know?” In reality the distance between Harrington and Rehoboth is 54 miles and once Lyndon experienced Rehoboth, Harrington became much too far away.

Back to work and living in Lewes, Lyndon is active in the CAMP chorus, as well as volunteering and participating in many other activities. He can’t say enough about how his life has been enhanced by engaging in the CAMP community. Asked what he wants his legacy to be, he doesn’t falter, “I want to be remembered as someone who loved God and loved nature and received blessings every day, a thousand times over.”