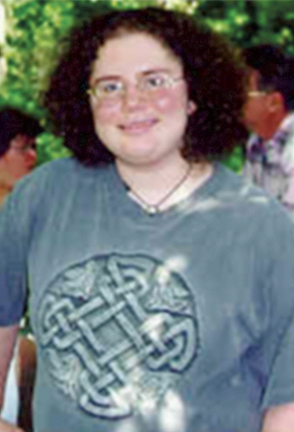 Kristen at her high school graduation party in 2000.

Looking Back and Facing Forward

I only make it back to Delaware a few times a year these days. Stopping by CAMP Rehoboth is second nature; most recently when I visited Murray was adrift in swatches of fabric, planning the decorations for Sundance. He mentioned that CAMP was celebrating 25 years. “If you don’t mind me asking, how old are you now?”

“I just turned 33. I met you when I was about 13.” We were both slightly taken aback at this realization. I wish I could have offered some profound reflection at the time, but all I could do was look at him and say, “Wow, I can’t believe it’s been 20 years.”

Then I found myself wandering down Baltimore Avenue and up Rehoboth Avenue, by the cheap t-shirt shops and throngs of tourists waiting in line for French fries and caramel corn. I walked past the house where my great-grandmother was born. The ocean was calm. You couldn’t hear the surf over the hubbub.

I don’t remember the first year of CAMP Rehoboth, I was eight when it started. What I remember from that time is farmers by the highways selling their land, and forests being cut with bewildered deer standing at their edges. Back then almost everywhere was closed in the winter. My family would walk the length of the Boardwalk on mild February days and look at the shuttered businesses and the water, maybe get a book from the lone bookstore. Then the outlets opened. More people started coming to visit, moving to the area. There was mumbling about outsiders and changing neighborhoods.

A few years after that I became abruptly aware of the existence of gay people because the church I’d been attending all my life started having conversations about “how wide the church doors would be open.” This was not a metaphor that I understood until I overheard less kind words and I figured out that people were talking about all of those nice men that had started to attend. I started telling myself that the way that I had begun notice the girl I sat next to in science class had nothing to do with any of this. (She had lovely eyes, and when we talked I felt like my heart was fluttering away and I desperately needed to keep it still). I took one of the books that the congregation was using to discuss homosexuality. I remember reading it in secret, crying until I threw up, throwing it away because I couldn’t bear to read it any more. People that I had known my entire life were having conversations about all of these gay outsiders. They didn’t realize that one of their own was also gay. The realization that I was One Of Those People was devastating. I was terrified of being found out, that something would give me away, that someone would look at me and just know that I was One Of Them and my whole life would unravel. Prayer did nothing; when I woke I felt the same.

Steve and Murray were two of those nice men at church, of course. It took a while to work up the nerve to approach them. In my memory the first time I said hello to them was a great victory. There were other LGBT adults that I would come to know as well—Glen and Kenny, Lori, Gretchen, Penny, so many others. They were points of light in a dark world, proof of a hopeful existence. They were there as I navigated the terrors of middle and high school and met a small handful of other LGBT teenagers. The guys and I—I was almost always the only girl—concocted elaborate stories to meet each other in our youth groups. We hung out in Lambda Rising for hours because it felt safe. Our bubble was the CAMP Rehoboth courtyard, especially after the fence was painted rainbow. It was our territory. Leaving and entering was risky, but when we were in it things were fine. In the background of our world was CAMP doing what it does best: training people about how we are people too, doing community outreach, doing community health. Things shifted in subtle ways. Walking down the street with my girlfriend was much less scary at 18 than it was at 16. The gays were still outsiders, except first I was the only out gay kid in school and then I wasn’t. It was always hard, but it got less hard. The influence of a community organization is sometimes hard to measure. I don’t know how to measure that CAMP saved my life and the lives of many of my friends; it was our real life “It Gets Better” campaign far before such a thing ever existed.

I turned out all right. I live in Boston these days; sometimes people make fun of my faint Sussex County accent. I always look forward to my trips home. The single greatest thing that Steve and Murray and everyone who ever worked for CAMP did for me is that they made sure my hometown would always be my home, and that I would not be treated as an outsider.

Kristen Minor is the former youth columnist for Letters.